Stuffed up with goodness that is! Just you wait and see.

We’re back a bit early this week for two reasons. First and foremost to express our gratitude to Deborah over at Taste and Tell Blog for featuring Eat, Play, Love in this week’s Blogger Spotlight. For those of you that aren’t familiar with Deborah’s blog, it’s a wonderful and delicious little space in the blogosphere. Deborah is a blogging veteran, a pro. She creates simple and tasty recipes and shares them through an honest writing style and tantalizing photos. To say we were honored would be an understatement. Thank you Deborah!

Now for the second reason we’re posting today – Blueberry Stuffed French Toast. It’s our latest contender in the French Toast Tourney and if this doesn’t end up as one of the final four, well you can butter my buns and call me a biscuit. In other words, you may not want to wait for the winner next March. This one is a must try, at least in my book.

While I wasn’t planning on really cooking on Mother’s Day, French toast seemed like a great way to hang out with the kids and enjoy some deliciousness. Plus it’s French toast – it doesn’t get much easier. So to get started we crafted our own recipe based on ingredients we had on hand and what sounded good.

We started by mixing some mascarpone cheese with powdered sugar and some lemon zest.

You can bet Miss A was all over this part of the recipe. She just couldn’t help herself from sampling the stuffing. It is cheese and sugar after all.

Next she and Mike sliced the tops off of the buns and cut pockets through the center. We chose a white bread bun, but thick bread would work equally well. Miss A then helped to stuff the mascarpone mix into the pockets which lent itself to more taste testing. 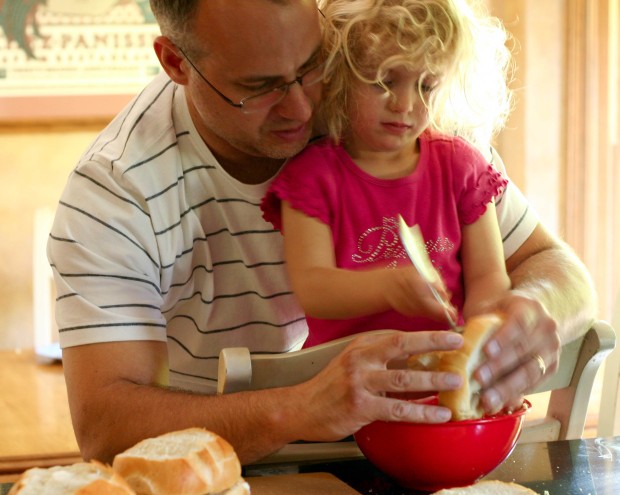 While Mike and Miss A were busy stuffing, I worked on our toppings. First I grabbed some pecans, butter, brown sugar and cinnamon.

I toasted the pecans in the butter and then caramelized them in the sugar. Yum!

Next I whipped up some of our good ol’ Maine Blueberry Sauce. Next to our Kauai Granola this is probably one of our most often repeated recipes. We typically use Maine blueberries which we find frozen at the store, but regular blueberries would work just as well. I’m just partial to the Maine variety.

Once the sauce was cooling it was time to prepare the French toast.

Mr. N was on-deck for his expert whisking and dipping. For the batter he whisked together eggs, milk, vanilla and freshly grated nutmeg. He then soaked the stuffed bread in the egg mixture, coating it completely, as Miss A serenaded him through her “microphone.” On this particular day she was singing that 80’s classic, Girls Just Wanna Have Fun – which she doesn’t merely sing, but belts out with a level of passion and soul that is sure to make Cyndi Lauper proud. It’s quite entertaining. Mr. N remained unphased, however, and focused on his task at hand.

And it was all over his hands!

Next it was onto the butter greased griddle with our freshly dipped French toast. We cooked the bread about 3 to 4 minutes per side, until it was golden brown and the cheese in the center was nice and warm.

Then it was time to dig in! We topped the blueberry stuffed French toast with the toasted, sugary pecans, blueberry sauce and a dollop of freshly whipped cream (into which we threw some lemon zest).

Needless to say, I thought this was darn, stinkin’ wonderful! It was definitely a 4 spoon French toast for me and so far, my leading contender. It was simply perfection for my taste buds. The blueberry and lemons – yum! The buttery pecans and whipped cream – oh my! Yes, I’m smitten with this one.

Miss A and Mr. N were quite pleased too. Mr. N had seconds and Miss A actually ate most of her serving. She’s a huge blueberry fan, much like her Pops was – I know he would have LOVED this. Each of the kids gave this 4 spoons too.

Mike, the biggest fan of blueberries in the house, didn’t give this 4 spoons though. I have to say, he is a harsh critic when it comes to his breakfast foods and has a really high bar for his 4 spoon ranking. He did enjoy the French toast immensely, but said he still wasn’t willing to give this one top marks. His system for ranking French toast seems almost as complicated to me as the RPI. No doubt French Toast Madness will be interesting.

So if you’re looking for a delicious, highly caloric, brunch recipe for the weekend, this one is a winner. It’s sure to leave you good and stuffed.

Many thanks again to Deborah! We’ll be back early next week to announce the next country on our culinary tour. Mike’s up to bat this round. And we’ll likely have a new state night to feature as well. Have a great weekend everyone. Cheers!

Print this recipe: Blueberry Stuffed French Toast
(Measurements are approximate as we did this on the fly.)

26 thoughts on “All Stuffed Up”