Stuffed up with goodness that is! Just you wait and see.

We’re back a bit early this week for two reasons. First and foremost to express our gratitude to Deborah over at Taste and Tell Blog for featuring Eat, Play, Love in this week’s Blogger Spotlight. For those of you that aren’t familiar with Deborah’s blog, it’s a wonderful and delicious little space in the blogosphere. Deborah is a blogging veteran, a pro. She creates simple and tasty recipes and shares them through an honest writing style and tantalizing photos. To say we were honored would be an understatement. Thank you Deborah!

Now for the second reason we’re posting today – Blueberry Stuffed French Toast. It’s our latest contender in the French Toast Tourney and if this doesn’t end up as one of the final four, well you can butter my buns and call me a biscuit. In other words, you may not want to wait for the winner next March. This one is a must try, at least in my book.  END_OF_DOCUMENT_TOKEN_TO_BE_REPLACED

Both Mr. N and Miss A have summer birthdays. So this year, since we’re in the new house, we decided to get them a swing set for their birthdays. We purchased a beautiful set at a very reasonable price, the catch – we have to build it ourselves. This is no easy feat as you can imagine. There are literally dozens of pieces of wood and hundreds of screws, and nothing is labeled.

This job was beyond dad and I, so much like the barn raisings of long ago, we invited some extra hands to help us put this thing together.

So since we’re raising the swing set and our state this week was Pennsylvania, we decided to whip up a few Amish dishes to get in the spirit of things. We started early yesterday morning with an Amish Stuffed French Toast.

The first step was to cube a loaf of bread. 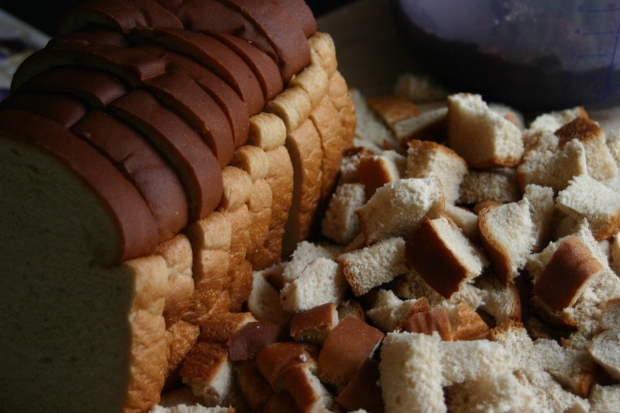 We placed the bread in a baking dish and then cut up a block of cream cheese and placed it in the bread.

The recipe then called for the use of a pie filling. Instead, we took fresh blackberries that we had frozen from my Grandpa’s garden last summer and combined them with a bit of sugar.

Next we poured them over the first layer of bread. 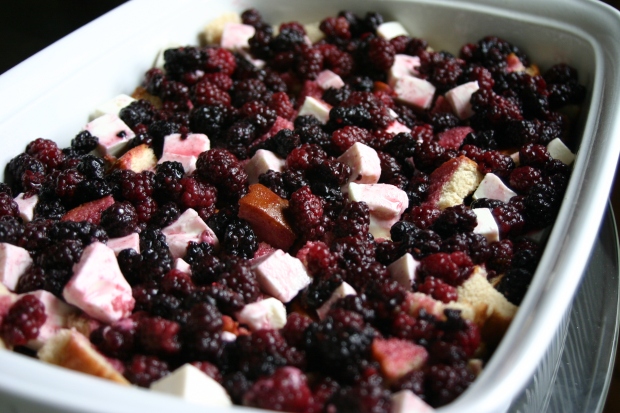 Then we added the remaining bread over the top. Finally in a bowl we mixed together eggs, milk, vanilla and maple syrup. We poured this over the top layer of bread, followed by a bit of melted butter and cinnamon. The French toast was then refrigerated overnight and baked for 50 minutes at 350F in the morning. 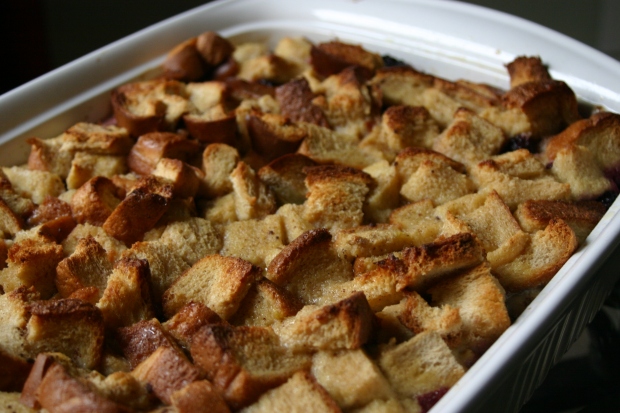 We served the dish with syrup and powdered sugar. However as good as this looked and smelled, it didn’t quite live up to our expectations.

Miss A rated it the lowest with 1 spoon. She barely ate any. Dad and I both gave the French toast 2 spoons. It was okay, but we think would have been better with white bread instead of wheat. And Mr. N seemed to enjoy it the most and gave it 3 spoons. He ate it for breakfast, dinner and again the next morning for breakfast.

As for the barn raising… 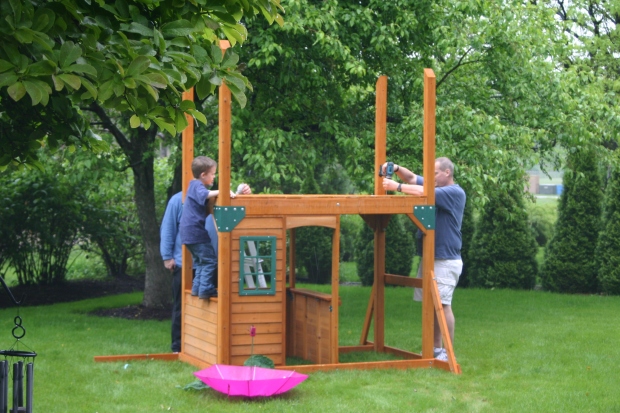 after a 12 hour day and having to wait out some rain showers (water and power tools don’t mix), it’s coming along. Here’s hoping tomorrow will be the final day for the “barn raising.”