By Mike
Thanks to all of you who tuned in for our Banana Bread quest that wrapped up this week, and congratulations to Doree, Sally, Sweet Caroline, Dawn, and all the other fantastic recipes we tried last year. With every end comes a new beginning, and we’re embarking on our next quest with our final recipe from Hong Kong, a Hong Kong-Style French Toast.

That’s right, this year we’ll be breaking down the world’s best French Toast recipes, culminating in an NCAA Basketball Tournament-style Final Four. See, with French toast, it’s not exactly simple to just make it, freeze a slice, then break it out when it’s time to pick a champion. So in the great spirit of college basketball, we’re going to test recipes throughout the year, then when March Madness rolls around next year, the selection committee is going to hole up in some secret location, armed with spreadsheets, data, stats, photos, and years of expertise. We’ll choose our Final Four entries, seed them into our tournament bracket, and square them off in a winner-take-all series of head-to-head matchups in a quest for that One Shining Moment.

Now, no analogy to college basketball would be complete without rankings and pre-season hype. In last year’s quest, our preseason favorite (Doree) survived until the end. This year, my preseason favorite is Bermuda French Toast, though I don’t know if the rest of the voters feel the same way. As for ranking the rest of the French toast, well, I think it’s a little early for that. One thing’s for certain, though…Hong Kong Phooey is still #1 Super Guy.

And that brings us to our first French toast recipe in the quest: Hong Kong French Toast, which ranked #38 in last year’s “World’s 50 Most Delicious Foods” as culminated by CNN. French toast is generally pretty straightforward (probably why they make it all the time on Chopped) and this is no exception. It’s messier than most, though, thanks to the peanut butter.

Mr. N. helped slather it on both sides of the bread, nice and thick.

Then it was my job to try to manage the peanut buttered bread without getting the slices stuck together.

Miss A’s job was beating the eggs that we used to coat the French toast.

After that, we coated the peanut butter-covered slices in the egg and tossed them in a whole lot of butter. We used enough butter to fill about a quarter-inch of the pan, so it’s almost like deep-frying rather than just coating the pan to prevent sticking. 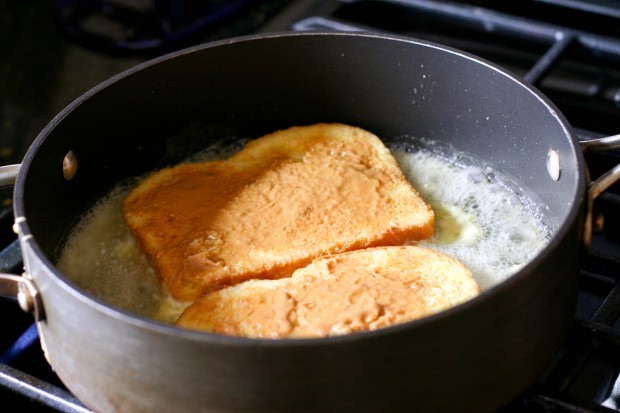 I cooked the slices for a fairly long time. They were really drippy and sloppy when I put them in the pan after soaking them in the egg mixture, and cooking them longer helped them stay together and firm up. 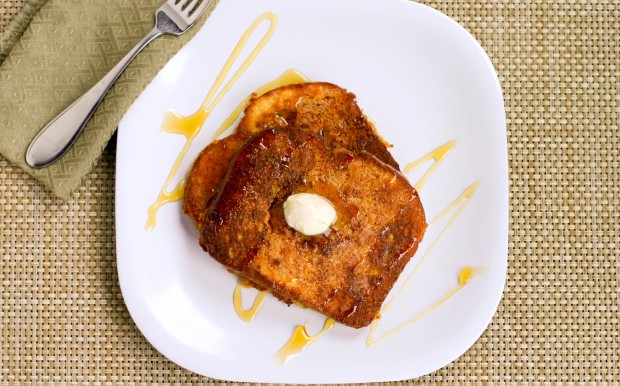 I think I would do two things differently next time if we make this again. First, I’d use chunky peanut butter for texture, and second, I’d leave the peanut butter spreading until right before the dipping. Mr. N did an exceptional job of coating them with peanut butter, but I did less well at keeping them from sticking to each other. The first two slices looked great, though, especially with the drizzle of golden syrup.

They came out with a little bit of a crust on them, which was really nice. The longer they cook, the more they crisp up.

There’s a ton of flavor in these, and they really don’t need much syrup with all the peanut butter, though the syrup certainly doesn’t hurt. They’re extremely filling too–two slices was more than enough even for me. Next time I just need to stop after two slices.

The final verdict: 3 spoons from Kristy and I, 2-1/2 from Mr. N and Miss A. It was good, but the bar on French toast is high, and it didn’t look like a contender to me. The peanut butter flavor is nice, especially in the first few bites, but it gets to feeling a little heavy pretty quickly. 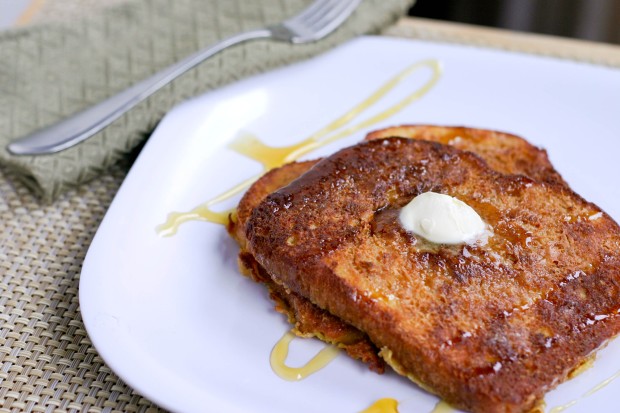 So there you have the second recipe for our French Toast Madness (Bermuda French Toast being the first contender). We’ll be featuring many more French toast recipes throughout the next year, and similar to the Quest for the Best Banana Bread, we’re open to any suggestions and recipes you’d like to throw in the mix. Go Chief…I mean Bermuda French toast.