Well, at least it was for an afternoon. This past Sunday I was part of a group, through my yoga studio, that volunteered to pull weeds in a meditation garden. This wasn’t just any meditation garden either – it was a walking labyrinth. We performed the service in silence and were able to participate in a guided walking mediation following our work. While it was initially quite a daunting challenge for me to think about not speaking for hours on end, I have to admit, it was one of the most peaceful experiences I’ve ever enjoyed.

Now as you can imagine, our house is anything but quiet. But a few weeks ago, I found the perfect way to get the kids to slow down on a restless summer afternoon. We made soufflés. As you may recall, we had just made a delicious Eggs Benedict which required the use of egg yolks. Now since these weren’t just any egg yolks, they were farm fresh, we didn’t want the whites to go to waste; and it just so happens that soufflés fit in nicely with our French cooking adventure.

As for what kind of soufflé, well this was a no-brainer. We had a lot of fresh raspberries on hand of which we are all fanatics. Now I’m sure you’ve all seen a cartoon or TV show gag somewhere along the line that involves a deflating soufflé due to a loud noise. Well, we told the kids about this as we started to make the soufflés and they were fascinated. I’ve never seen them so quiet – truly.

We started by simply pureeing the raspberries in the blender along with some sugar and a touch of flour.

Next we whipped the egg whites into stiff peaks before adding a bit more sugar and a pinch of salt. 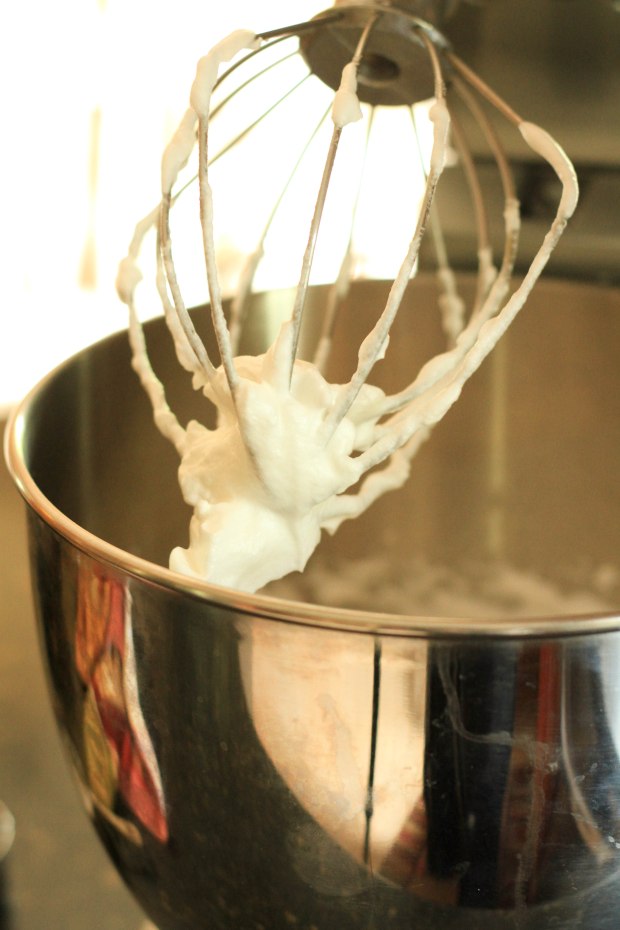 After the whites were whipped, we folded in the raspberry puree.

We then filled our butter greased ramekins with the mixture. The recipe makes enough to fill 6 to 8 ramekins depending on the size. 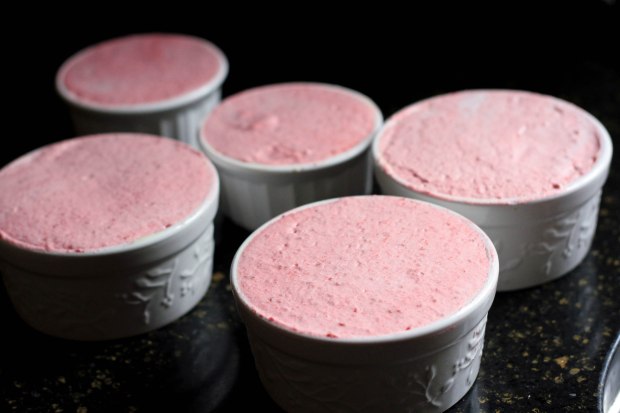 Next we used the back of the spatula to create flat tops for the soufflés.

And then…it was time for silence. The kids walked slowly through the house so as not to disturb the soufflé as they baked, and for a while they even sat just watching them rise through the oven door. Believe me this is a trick I’m going to remember to use again! The soufflés rose beautifully in the oven, but unfortunately deflated while I was attempting the pictures.

Next time I will have to be quicker! The kids were a bit disappointed that they didn’t stay fluffy, but that didn’t stop them from giving the raspberry soufflés 4 spoons.

The soufflés were light and airy and delightfully sweet. Not too bad for our first attempt at this French dessert. Mike and I gave the dish 3 spoons. They were very good, but hard to beat my other favorite raspberry treat…

Let’s just say I put the leftover raspberry puree to good use. (It helps to have a homemade pie crust on hand in the freezer!)

And a few extra ramekins. This certainly got 4 spoons all around!

25 thoughts on “All is Quiet on the Homefront”