Well, we have finally reached the end of our French cooking adventure. It’s been a nice little tour through a bit of our heritage. We started with our coq a vin, dined on some delicious leeks, sampled some lovely sables with a delicate mousse, kicked it up a notch with some ratatouille and of course quieted things down with our souffles. As for our last French recipe, we received a special treat – a tin of French Lentils du Puy from the lovely Eva at kitcheninspirations when we met up in Canada earlier this summer. 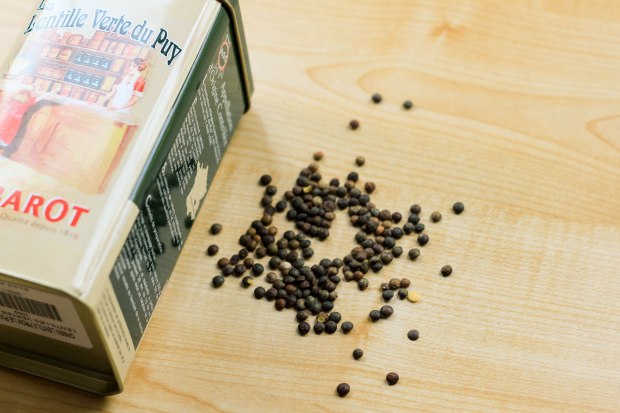 Lentils du Puy are a highly regarded lentil and hail from the Le Puy region of France. Knowing these were special lentils, we’ve been waiting for just the right recipe to inspire us. Then after finding some tart cherries at the farmer’s market, I knew where we were headed – a Lentil and Seared Scallop Salad with a Cherry-Pom Vinaigrette. The recipe starts with the vinaigrette for which we used the tart cherries, red wine vinegar, balsamic vinegar and a special bottle of pomegranate molasses courtesy of Barb at Profiteroles and Ponytails who you may recall, we also met in Canada.

We pureed the cherries and a shallot. We then mixed in the vinegars, molasses and some seasonings. After a bit longer in the food processor, we pushed the mixture through a sieve. We mixed the dressing with a bit of oil and placed the vinaigrette into the refrigerator to cool. 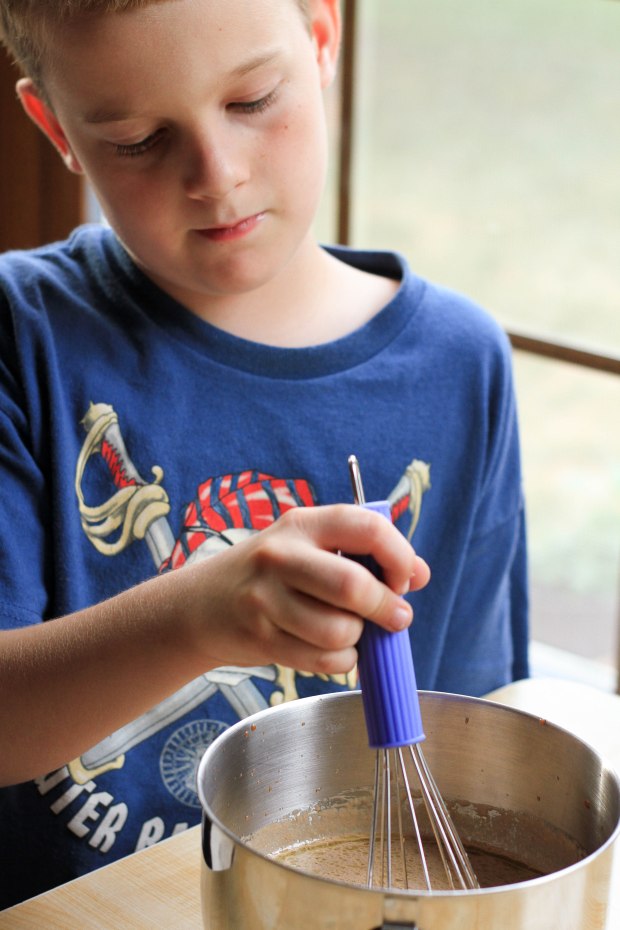 While the vinaigrette chilled we prepared the salad. We used fresh spinach, the lentils (of course!), goat cheese, a few sliced shallots and even a bit of bacon.

Next we seared our scallops using a bit of fleur de sel for that extra French touch. We then served the salad topped with a scallop and a side of the cherry-pom vinaigrette.

This was a delightful and filling meal. The lentils provided a firm texture and strong flavor which was complemented well by the vinaigrette and goat cheese. 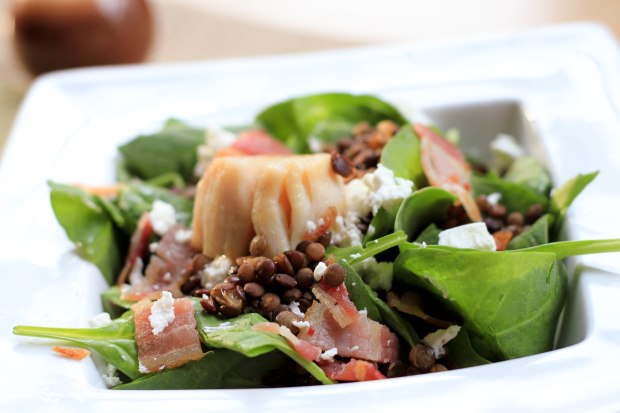 I was nervous the strong flavors would overshadow the scallop, but it too worked providing a soft texture and flavor to the meal. It was a definite hit with both Mike and I coming in at a solid 3 spoons.

I was also a bit apprehensive about how this meal would go over with the kids. Well, as you can probably guess, we had mixed reviews. Miss A, not a big fan of salad just yet, was not too impressed. She liked the lentils and ate her scallop. She even picked out the bacon and cheese. The spinach and dressing were left behind. I suppose she prefers her salads deconstructed. It was 2 spoons for her.

Mr. N on the other hand was a bit less picky. He ate his whole salad and didn’t complain. He too said it was only 2 spoons; although I suspect if I made this again he would eat it.

This was a flavorful and bright way to serve the lentils, especially in the summer. We enjoyed it so much in fact, that we served it as a side salad (minus the scallop) to Friend Sue and Richard for dinner the following weekend. It went very well with the gluten free meatloaf that Friend Sue made for the evening. Perhaps she’ll let me share the recipe soon. It was a winner for sure! Until then, here’s the recipe for the salad: Lentil and Seared Scallop Salad with Cherry-Pom Vinaigrette

I should mention that if you happen to have several extra cherries lying about after making the vinaigrette, it never hurts to toss them in a crisp with some other fruits hiding in the fridge. We made this Cherry, Blueberry, Peach crisp for dessert that evening. I think you can safely assume this one was 4 spoons all around. Sadly, I don’t have a recipe as I just threw it together for a basic, but delicious crisp. 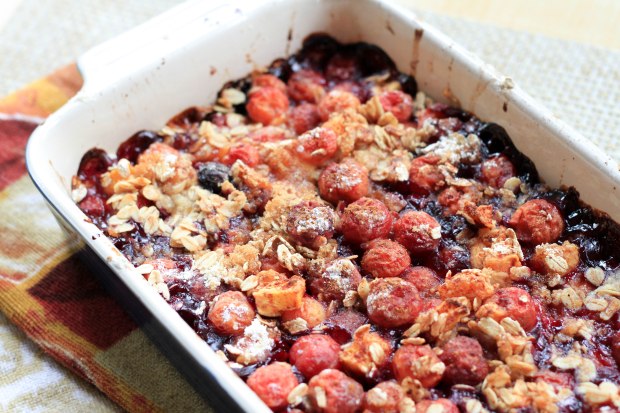 Well, that successfully concludes our French cooking summer. It’s been a delicious little adventure and it was quite a bit of fun to delve into our own family history. But it’s not all French in our blood. We have quite a bit of English as well, and Mr. N recently channeled his inner Brit to play the Archbishop of Canterbury in a student version of Excalibur.

It was his best performance to-date and so much fun for him (and us!). He even developed – and maintained – a quite acceptable British accent. It was a smashing success. 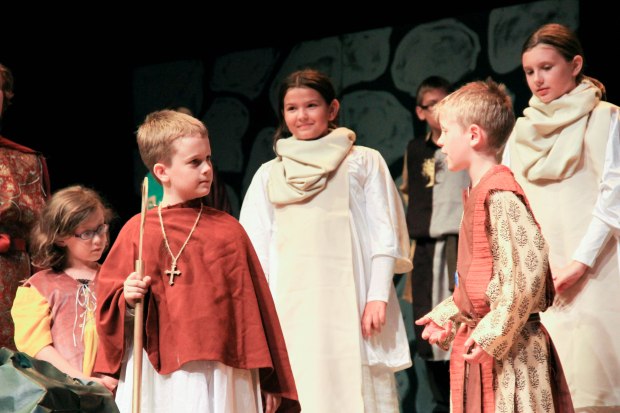 Perhaps we should think about revisiting English food as well, but first we have our birthday meal wrap-ups, a stateside adventure and then once school starts we’ll be selecting our new country for the next round of international cooking. I think we’ll be heading back to the Middle East. Enjoy your week everyone! Cheerio and au revoir!

26 thoughts on “Lentils du Puy and the Archbishop of Canterbury”