Alright, who’s ready for some Mongolian main course meals? When we first started researching all we really knew of Mongolian food was that we’d eaten at BD’s Mongolian Grill and had heard of Mongolian Beef. Well, it turns out that the food served at the Mongolian Grill isn’t really Mongolian at all. In fact, here’s what Wikipedia has to say:

Although one such locale, BD’s Mongolian Grill, has opened even in Ulaanbaatar (ironically the first American chain to open in Mongolia), neither the ingredients nor the cooking method has anything in common with Mongolian cuisine. Rather, they are inspired by the Japanese teppanyaki.

And as for Mongolian Beef, well that has its origins in American Chinese cooking and is also not Mongolian. So we had to do some more digging. Mongolian diets rely heavily on meat – particularly from domesticated animals. As much as we try to keep true to the local traditions, we weren’t about to eat horse, yak or camel, so we opted for the next best thing – lamb, which is also a common meal. There are several ways to cook lamb, one we’ll explore later in the week, but by far the most interesting one to us was the traditional Mongolian Khorkhog (pronounced “horhog”). We knew that we had to give this a try.

We began the recipe with smooth rocks. Ocean rocks in our case. (It helps that we have a rock collector in the house. Thanks Mr. N!) 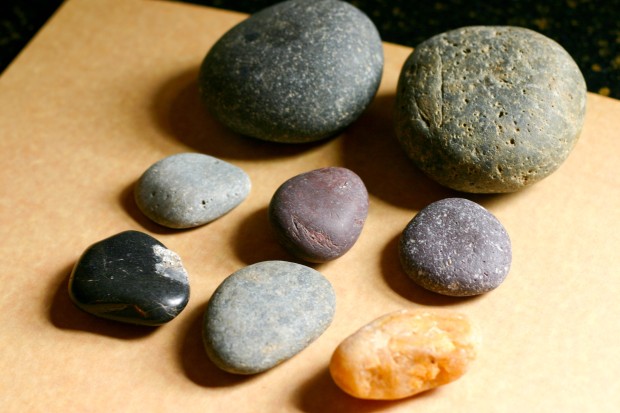 We got the rocks super hot by cooking them on the grill over really hot charcoal, a campfire would work as well. 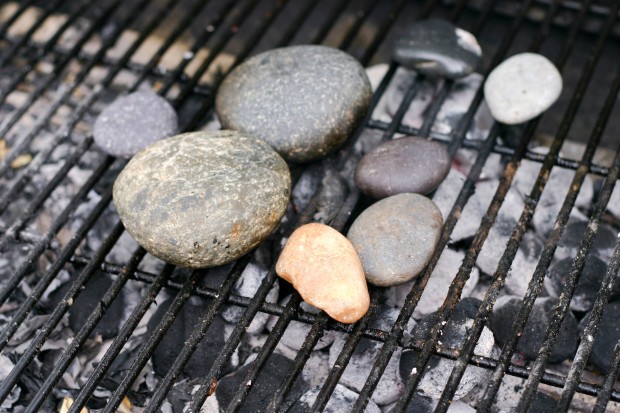 While the rocks cooked for an hour, we readied our seasonings including onion, garlic, salt and pepper.

We then cut our lamb chops while leaving it attached to the bone.

After seasoning the lamb with the salt and pepper we headed out to check on the rocks. We placed the smaller, very hot rocks, in the base of our wok. 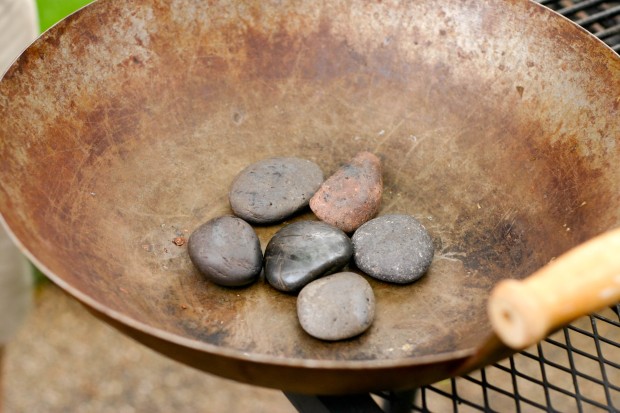 We then tossed the seasoned lamb chops over the rocks,

followed by our onions, garlic, lemons (which we added to the recipe for good measure) and a few more rocks.

Next we poured in some white wine, honey and water – enough to cover the meat.

We covered the wok, securing the lid tightly, and placed it on the grill.

The lamb steams in the wok for between an hour to two hours, depending on when the meat reaches the desired level of doneness. Ours steamed for about an hour and 45 minutes. Just look at the steam that was swirling around in there!

We served our lamb chops with some crusty French bread to sop up some of the broth created by the cooking process. You could also serve this over white rice if desired.

Now here’s how I expected things to go based on our past experiences with lamb, I figured Mr. N and Mike would love this. They have devoured our other lamb recipes. I also didn’t expect Miss A and I to be very keen on it as we’re not big into the strong flavor of lamb. Well, you can probably guess that things didn’t quite go as planned. 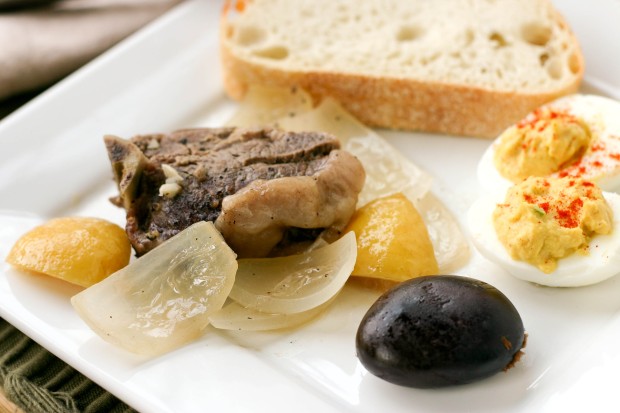 Mike and Mr. N were not overly impressed by the meal. Mr. N was more fascinated by the fact that his rocks had changed color. Most of them became dark black, except for the yellow rock which turned a deep red. Mike felt the texture was right on, it was cooked well, but a bit too bland. Mr. N felt the same way. It was 2-1/2 spoons for both of them. They did, however, really enjoy the broth with the bread. That wasn’t too bland.

Now I have to admit, while I was totally looking forward to cooking this meal (which almost didn’t happen with the thunderstorms we had nearly all day), I wasn’t very excited about eating lamb again. It usually is just too strong and funky of a flavor for me. The khorkhog actually surprised me though. I didn’t find the flavor to be overly funky (how’s that for a descriptor) and it was fall off the bone good. It earned a surprising 3 spoons from me.

So how about Miss A? She’s been rather picky as of late – well, excepting dessert recipes. Would you believe that Miss A doled out 602 spoons for this meal? Yep. She’s gotten a bit crazy with her spoons lately too. In all seriousness though, this one was a definite 4 spoon dish for her. She ate all of her lamb and some of mine! Who would have thought.

As for the rocks, well, we passed those around before the meal as is part of the Mongolian tradition. It is said to bring peace and reduce stress, and I have to say, it was very soothing. It also brought a bit of humor to the table as Miss A held her rock and said, “But it’s not soft yet. How am I supposed to eat it?” The three of us, especially Mr. N, got a pretty big kick out of that one.

So there you have our version of the Mongolian Khorkhog adapted for cooking at home. It was so much fun and an experience none of us will ever forget. I mean we certainly never expected to be grilling rocks and then tossing food over them. It was a great recipe to make with the kids, and actually very easy when it came down to it. Let’s just hope the next Mongolian recipe goes as smoothly. We’ll be back Saturday to share it with you.

In the meantime, if you would like to leave a comment (we love them!), and don’t want to receive emails every time someone else leaves a comment, don’t forget to uncheck the follow comments button that WordPress has now automatically checked for you. Have a great week!