Whenever I hear the word chimichurri I always think of the song from Mary Poppins. It’s such a happy little song and who doesn’t love Dick Van Dyke – the man exudes happiness.

But chimichurri obviously has nothing to do with sweeping chimneys, rather it’s a sauce used with grilled meat that originated in Argentina. It can also be found in Uruguay, Columbia, Mexico and…Nicaragua!

So for our last Nicaraguan recipe we bring you a delectable steak recipe featuring the chimichurri sauce for what we’re calling Nicaraguan Tenderloin. We started by preparing the sauce using Italian parsley, olive oil, red wine vinegar and garlic. 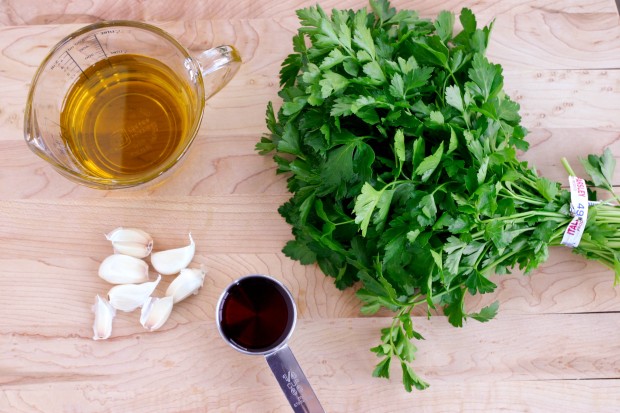 The parsley and garlic were chopped in the food processor and then the olive oil, red wine vinegar and salt and pepper were tossed in and pulsed to form the sauce. It’s important to sample the sauce at this point and adjust the seasonings as necessary to ensure that it’s strong and flavorful. 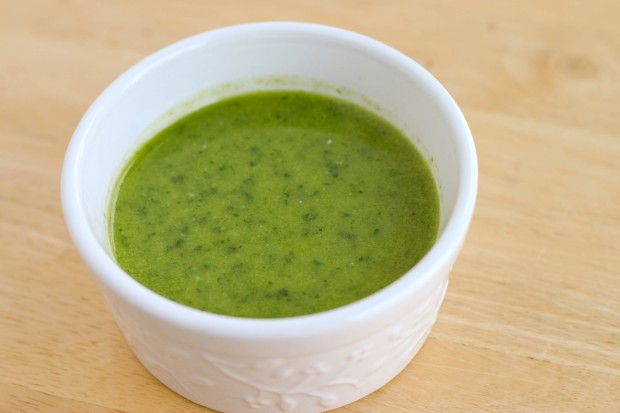 We then divided the sauce into two bowls – one for serving with the meal and one for the marinade. Then we turned our attention to the tenderloin. 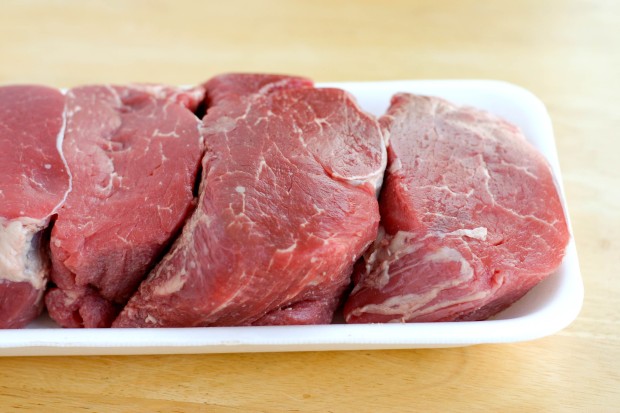 We sliced the tenderloin lengthwise into 1/2 inch strips and placed it between two sheets of plastic wrap. Miss A then brought the hammer down…or meat mallet as it were. (And no – she’s not pouting. She’s posing. LOL.) 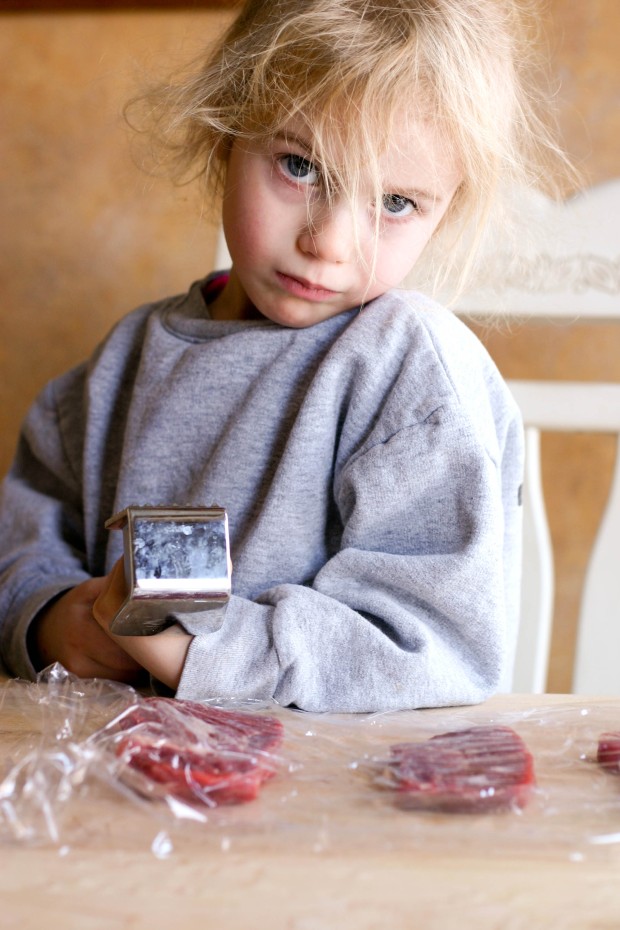 She had a great time pounding away. 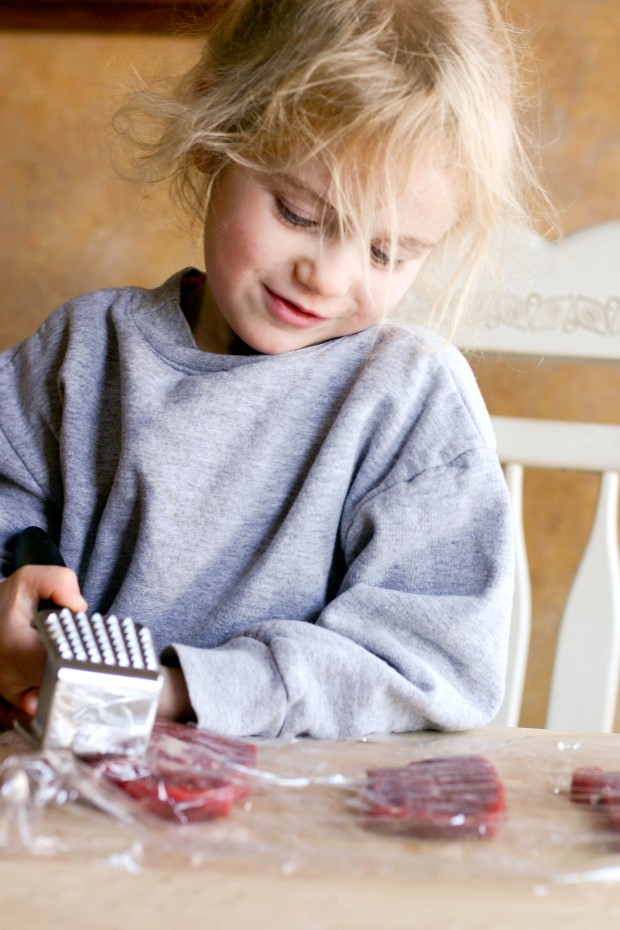 And she even did a nice job getting our steak strips to about a quarter-inch thickness. 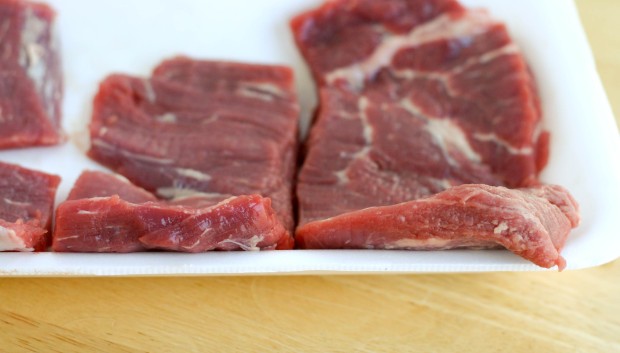 We then tossed the steak strips into a bowl with the chimichurri marinade and set it aside for 30 minutes. 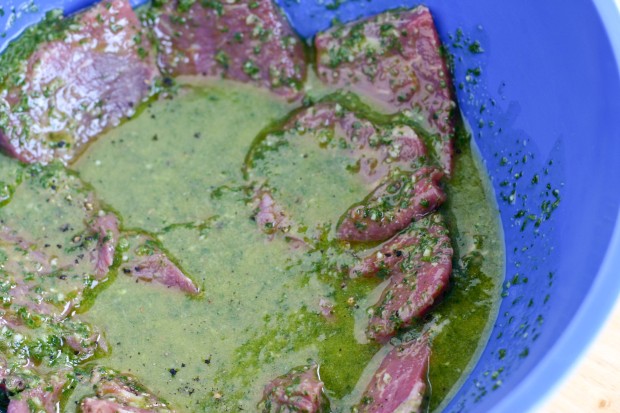 After flipping the steak in the marinade a few times, we were ready to grill. We heated the grill pan over high heat and then oiled it before tossing on the steaks. 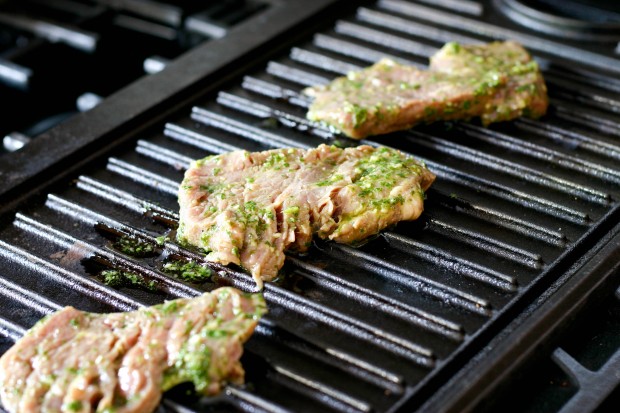 We grilled the steak for about 1 or 2 minutes per side and then set the meat aside to rest.

As most of you know, we served our Nicaraguan Tenderloin alongside our Utah Johnnycake and Nicaraguan Gallo Pinto. 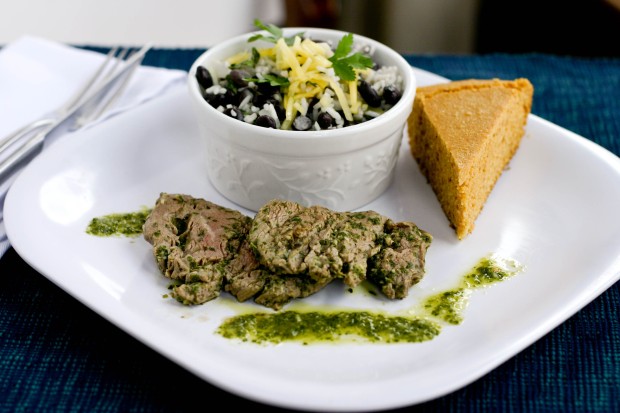 It was a delicious, fun meal and one in which we all found something we enjoyed – even Miss A. While the Johnnycake and gallo pinto weren’t quite up Miss A’s alley, this steak was a very different story. Miss A actually devoured her serving and asked for two additional helpings! You know what that means – 4 spoons. 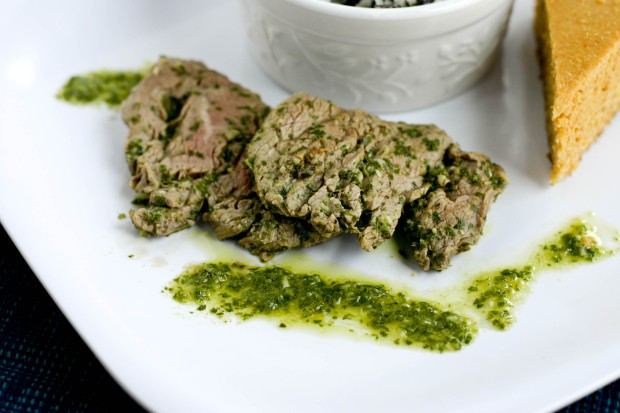 This was also easily a 4 spoon recipe for me too. I’m not a particularly big meat-eater and it’s not usually anything I would order at a restaurant, but this dish was right up my alley. The chimichurri really took steak to a whole new level for me. 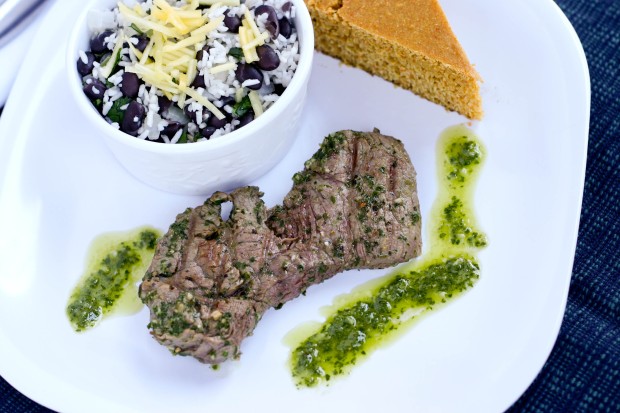 The boys, however, had a different take on the tenderloin. Mike, someone who does enjoy his meat, only gave it 2-1/2 spoons. He thought it was just “fine” – not great. The sauce was a bit too acidic for his tastes. Mr. N also gave the steak 2 spoons; although this wasn’t really a surprise. He’s a chicken and fish guy. What was a surprise was that he was able to name the ingredients of the chimichurri on taste alone. Impressive for a seven-year old I thought.

While each dish came in with varied reviews from the four of us, we’re going to call it a success. We all found something we really enjoyed and aside from Miss A’s feelings toward the Johnnycake, no one really disliked anything. And as Mike will tell you the steak and gallo pinto leftovers made for a great burrito the next day. Well, it’s now farewell to Nicaragua and off to our next international location with Mr. N as our tour guide. I’ll give you a hint…he’s a big fan of Asian food. 😉