It looked extremely rocky for the Mudville nine that day;
The score stood two to four , with but one inning left to play.
So when Cooney died at second, and Burroughs did the same,
A pallor wreathed the features of the patrons of the game.

A straggling few got up to go, leaving there the rest,
With that hope that springs eternal within the human breast.
They thought, if only Casey could get a whack at that,
They’d put up even money now, with Casey at the bat.

When I was ten years old, my dad made me a deal that if I went a whole season in little league without striking out, he’d take me anywhere in the world I wanted to go for dinner. Now, at age 10 I didn’t know as much about cooking around the world as Mr. N and Miss A, and I think he figured I’d pick something familiar and local. I was, however, an adventurous eater and by about the third or fourth game of the season, I’d settled on Joe’s Stone Crabs in Miami. I’d never been there, but my dad would have occasion to travel there back then, and he always raved about it. In retrospect, he probably did some nudging to ensure that if I picked a place that would wind up costing him two plane tickets, he at least wanted stone crabs out of the deal. I also think he didn’t expect to have to pay up.

With about four games left in the season, though, I still hadn’t struck out, and things were getting serious. I have a very good memory of many things from little league, but much of the detail from this particular day is lost. I don’t remember the count, the pitcher, the opponent, the baserunners, or the score. I do remember the pitch. I can still see the laces spinning in slow motion toward my eyes, as big as a beach ball. I remember swinging, hard, as it sailed by, a foot above my head, then over the catcher’s and then over the umpire’s.  I missed it by a foot. In baseball parlance, I’d have needed a ladder to hit that one. Strike three.

I also remember what happened next. My dad, all 6’3″, 225 pounds of him, came charging out of the bleachers, screaming, “Foul Tip! Foul Tip! He tipped it! Get back up there, Mike!” At the time, the umpires were 15-year-old kids, and the ump for this game wasn’t about to argue with my dad any more than I was. I think I grounded the next pitch into a 6-4 fielder’s choice, but I’m not sure. I just remember knowing how much Dad was cheering for me, and that was pretty cool. Or he just wanted stone crabs.

Alas, I struck out in the next game or the one after that, and I’ve still never been to Joe’s Stone Crabs. Whenever we make it down to Florida and they’re in season (October 15-May 15), I do like to eat ’em though. Kristy was happy to indulge me on my birthday this year. 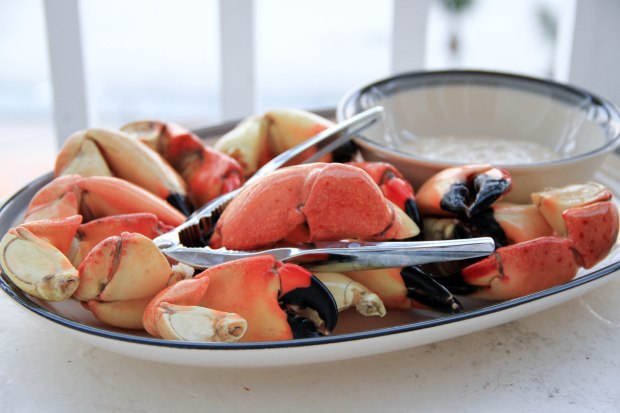 Cracking stone crabs is hard, and better done with a hammer than cracker, but crackers were easier to come by on our vacation, so we made do. Having them cracked isn’t a bad idea either, as it takes some practice to avoid mangling them, and we don’t have them often enough to practice.

There’s no recipe here, just serve them with your favorite sauce. Joe’s suggests mayonnaise, I like creamy horseradish sauce. So in absence of a recipe, we’ve got vacation pictures.

Harry Potter at Universal was Mr. N.’s favorite part of the trip, I think. He went on the HP ride once with Kristy and once with me, and all agreed it was worth the 90-minute wait. Miss A is still a little small for the big rides, but she enjoyed the village and we got to play in Dr. Seussville while Mr. N. was in line.

We also really enjoyed our visit to St. Augustine, which is the oldest settlement in the U.S. I highly recommend it, but you should plan more carefully than we did, as it’s hard to park and not really intuitive to get around.

It’s visually kind of like New Orleans with its alleyways and balconies, but without the smell and the seediness, or the revelry; though Miss A and I danced to some Lynyrd Skynrd cover band with much energy and somewhat less skill.

Sadly we got there just too late to be able to tour the inside of Castillo de San Marcos the Spanish fort that used to guard the city. The outside was very cool, though, and Mr. N. really liked it.

Mr. N and Miss A didn’t care for stone crabs as much as I, but between Disney, Universal, St. Augustine’s and the beach, there certainly was plenty of joy in Mudville to go around. 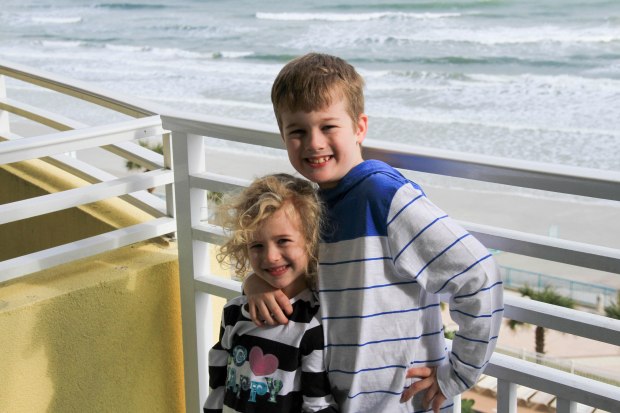 51 thoughts on “ChefDad at the Bat”