Happy 2013! Personally, I for one couldn’t be happier that we’re in a New Year. I don’t think the changing calendar has ever been quite as symbolic as this past holiday was for us and we wanted to make it special. So after our marathon weekend of cooking, baking and shopping; and after four Christmas celebrations, Mike, Mr. N, Miss A and I packed up and got out of dodge! We decided to end 2012 on a high note. 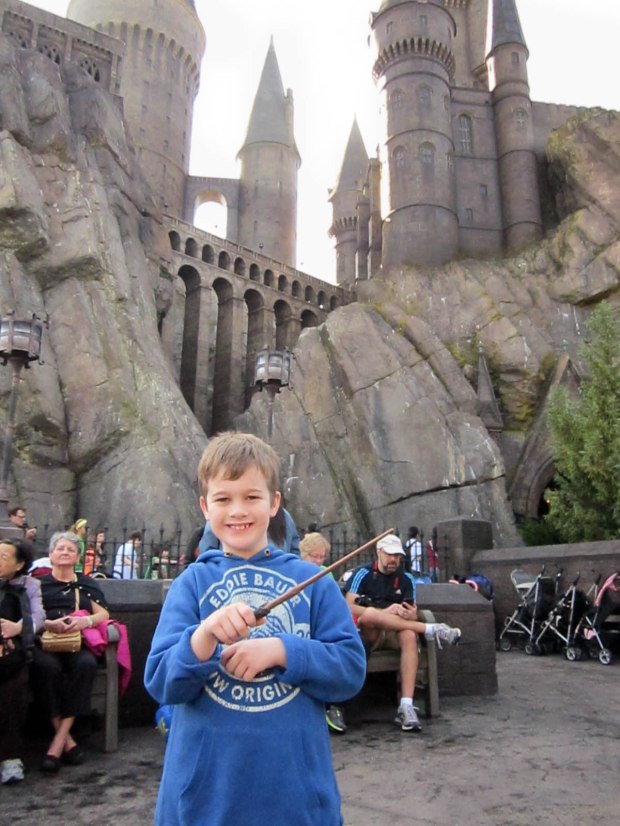 Mr. N tests out his magical abilities at Hogwarts!

And we wanted to start the New Year on the right foot, by spending a day at the happiest place on Earth:

Miss A doing her happy dance!

Clearly the kids are ready to rein in their castles, but what does that have to do with Chilean cuisine? Well, for our last recipe from this South American country we’re going to bring you a delicious, warming dish – perfect for hunkering down in this cold weather. The recipe, Porotos con Riendas, translates to beans with reins, with the reins being spaghetti.

In our search for traditional Chilean recipes, Porotos con Riendas kept popping up. It’s a stew-like dish with beans, squash, sausage and…spaghetti. I was admittedly skeptical.

In all honesty, I wasn’t really looking forward to the meal, but there’s a reason we’re on these culinary adventures. So we hopped to it. To begin we sauteed an onion and garlic, then tossed in some carrot, sausage (we used kielbasa), oregano, paprika and red pepper flakes. After cooking for about 15 minutes, we turned off the heat and set the skillet aside. Next we turned to the remaining ingredients. For our squash we chose the butternut and to save a little time we bought it pre-cut at the store. We also used canned white beans this time around too.

First we cooked the squash in boiling water for about five minutes, next we tossed in the spaghetti. About three minutes before the spaghetti was al dente, we added the beans and then with about one minute left, we stirred in the ingredients previously set aside. Finally, we seasoned with salt and pepper and were ready to serve.

I was still hung up on the use of spaghetti; although, I suppose it’s not that much different than using noodles in chicken noodle soup. Still, there was just something about the spaghetti that seemed odd to me. Fortunately, after the first bite my skepticism vanished instantly. It was fabulous! 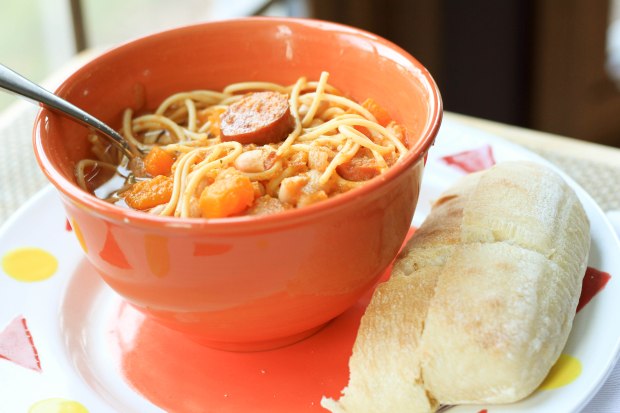 Mike and I were truly blown away with how much we enjoyed this dish. It was full of flavor. The butternut squash provided a nice sweetness to the otherwise salty ingredients and the spaghetti actually worked quite well with the beans and squash. We enjoyed the stew so much that it earned our top rating, 4 spoons, from each of us. As you know, this isn’t a rating handed out lightly either. 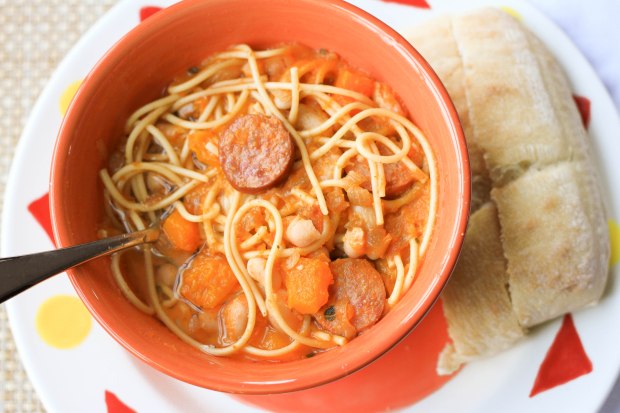 Unfortunately, the kids didn’t enjoy the meal quite as much as we did. Mr. N is not a big squash lover despite devouring it when he was one years old. Then, however, he turned two and quite literally could not (read: would not) keep squash down. While he hasn’t pulled that little stunt since, he’s still not impressed. I will give him credit though, he does keep trying. So Mr. N ranked it quite opposite of Mike and I – a 1 spoon.

Miss A had mixed feelings. She liked the spaghetti and sausage a lot, but she wasn’t too keen on the squash. When asked, she said it was 2 spoons. Now being as how Miss A usually ranks things she likes with 92’s or 504’s, I’m not quite sure how to read this vote, but she did eat quite a bit.

So where would your ranking fall? With the grown-ups or the kids? Well, I know we’ll be making it again. In fact, I saved some squash in the freezer for just the occasion. I’ll just be sure to set some spaghetti aside for the kids.

We hope you’ve enjoyed our Chilean adventures as much as we did. And as we mentioned we have a lot of fun on the way. Next up we’ll share some more of our Florida fun and a little non-recipe Florida treat.

Until then, here’s wishing you a magical New Year. 🙂 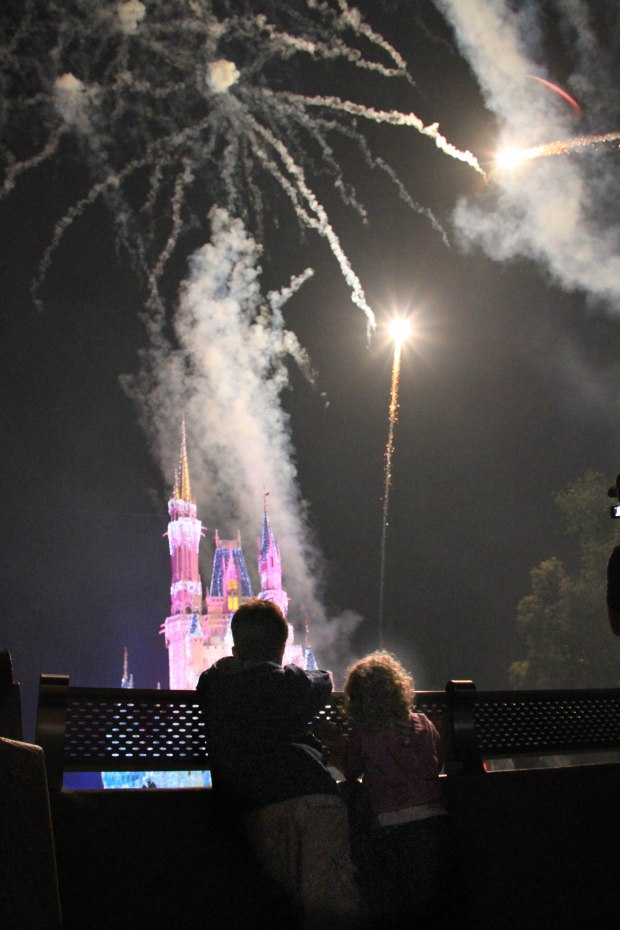 25 thoughts on “Reining in the New Year”