No, that’s not a rolling the eyes, placating “ok” which you might hear Mr. N mutter when it’s time for bed. Nope, that’s a cheer for Oklahoma! **Spoiler alert!** This is another good one from the Sooner State. To learn why Oklahoma is the Sooner State, check out this link from Sally, an OK resident over at the Bewitching Kitchen. See, don’t you feel smarter already?

So what could we possibly have found to top our Oklahoma Bourbon Steak Quesadillas with Peach Salsa? Well, the Made in Oklahoma site came through for us again, this time in the form of a bread pudding. A Citrus Raisin Bread Pudding to be exact.

This time, although tempted to use our Greenlandic cake recipe again, we opted to go for a sweet raisin bread in the bread machine. The result was a dense, crusty and sweet-smelling delicious raisin bread.

Now more often than not you’ll want to use a less fresh loaf of bread for bread pudding, but stick with us…we have a plan.

Miss A and Mike took care of breaking up the bread and tossing it into the greased baking dish. 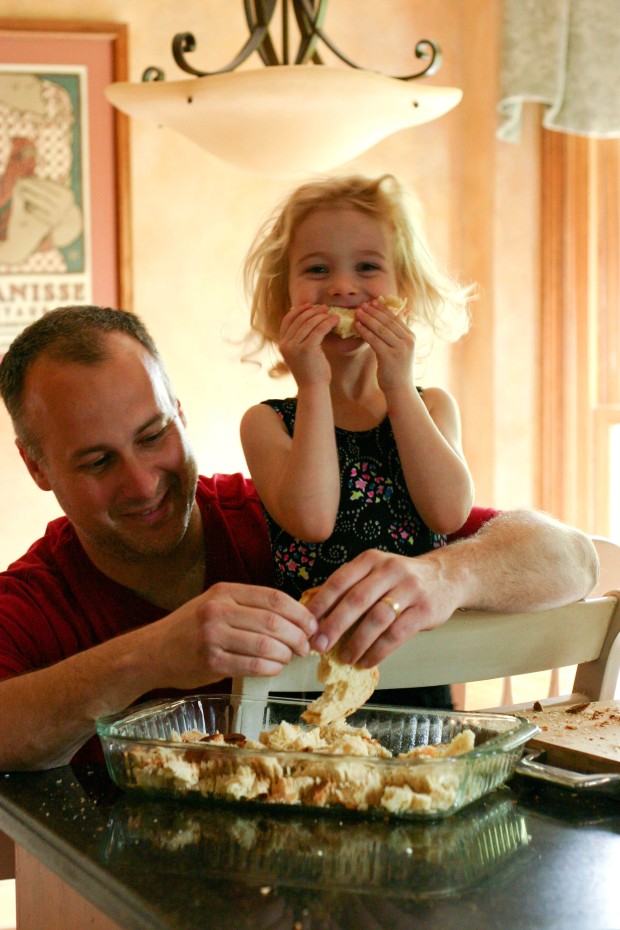 Next Miss A poured some melted butter over the bread slices and tossed them to coat.

We then grabbed the rest of the pudding ingredients including half-and-half, sugar, brown sugar, eggs, skim milk, vanilla, cinnamon and nutmeg. 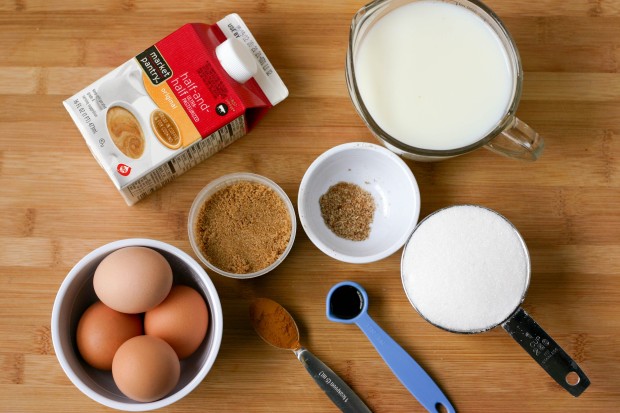 You can guess who whisked it all together for us. Mike actually asked Miss A if he could whisk to which she replied, “Ugh. I’m the whisker. You’ve never whisked before.” Besides, she was having too much fun.

Finally we poured the batter over the bread which we then covered and placed in the fridge to sit overnight.

The next morning we preheated the oven to 350F and tossed the bread pudding in to bake. While the pudding was baking, we prepared the citrus sauce from sour cream, butter, sugar, orange juice and lemon zest.

First we melted the butter and the sour cream in a small sauce pan. 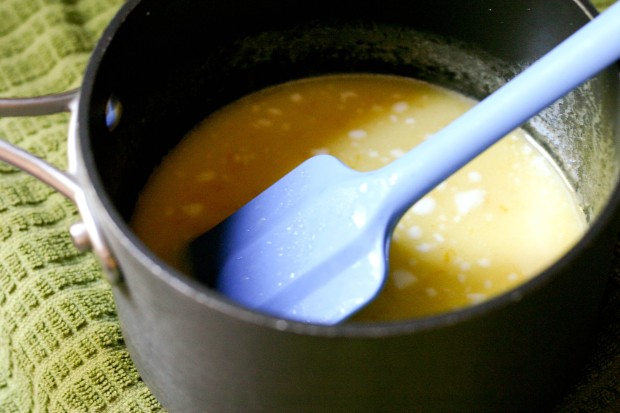 We then added the sugar, orange juice and lemon zest to the sauce pan, whisked it in and brought the mixture to a boil. We set that aside, keeping it warm as the pudding finished. The pudding took about an hour to get to the point that it was golden brown and puffy in the center.

But the wait, was well worth it. I have to say, I could hardly stand taking the pictures as I was so ready to dig into this goodness. Fortunately it lived up to my anticipation.

The bread was a good match with this dish – crusty enough to add the perfect amount of texture and dense enough to soak in the pudding flavors. It was easily a 4 spoon breakfast for me. Hands-down.

Mr. N too came in with a 4 spoon vote. He thought it tasted a bit like cinnamon rolls and was happy to eat a second serving.

Mike really enjoyed the bread pudding, but he hemmed and hawed over whether it was 4 spoon worthy. He’s a breakfast connoisseur and it has to be really out of this world to win over his heart. But with a drizzle of the citrus sauce… 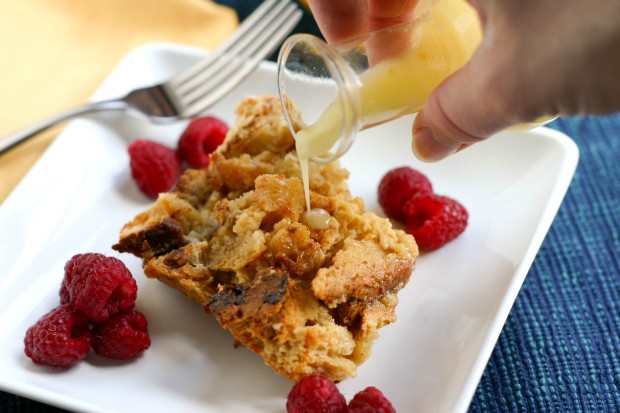 He ultimately came in with the 4 spoon vote. I mean seriously, how could he not?! As for Miss A, well she liked it, just not as much as the rest of us. She was the only thing keeping this from becoming a coveted 4 spoon all-around winner. It was a 3 spoon breakfast for her.

I have to say, I think Oklahoma may be my favorite state so far. Last year, Colorado, was a four-spoon all-around winner for the peach buffalo steak and balsamic fingerlings, but I have to say, I think I’m going to crave Oklahoma’s dishes a bit more. I mean, I’m seriously still thinking about those steak quesadillas. So thank you Oklahoma! Yum!

We hope you’re all off to a great week. We’ll be back toward the end of the week with our final nod to Mozambique. Now, I’m going to go finish off the bread pudding. Nothing wrong with a little breakfast for dessert (or dessert for breakfast as it were).