Happy Halloween! I know we promised the recipe for the Cuban black beans and rice, but we’re not going to post that today. That’s the trick. But don’t worry, we have a treat in store instead – Pumpkin French Toast with Apple Cider Syrup. And yes, this latest challenger for our French Toast Madness, is as good as it sounds.

We started by soaking the slices of brioche in the batter – a mixture of milk, half and half, vanilla, pumpkin, eggs and spices. 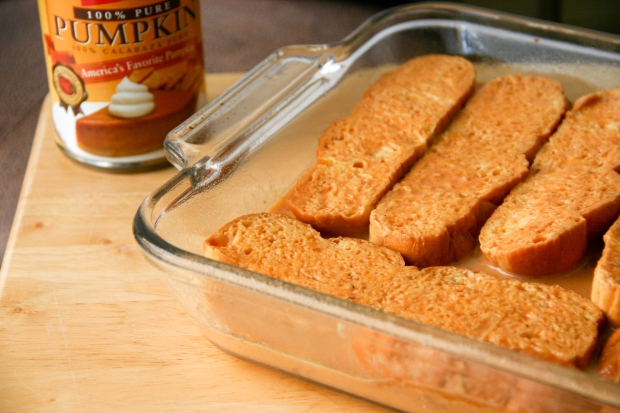 You can soak the bread overnight, or if you don’t want to wait that long, 30 minutes did the trick. So while our bread soaked we toasted some pecans in a mixture of butter, sugar, cinnamon, all spice, chili powder and other seasonings. The nuts roasted in the oven at 400F for about 8 minutes. 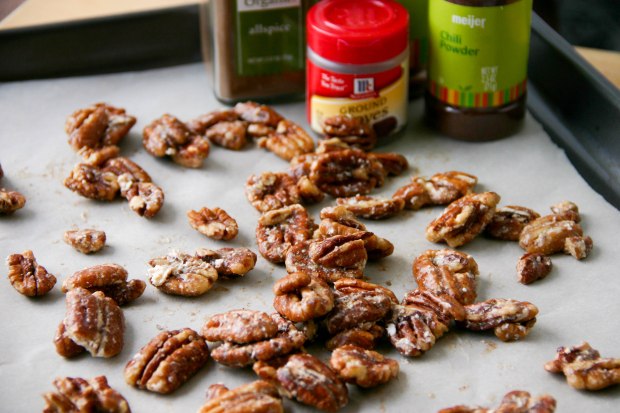 We also used this time to prepare the apple cider syrup. We boiled sugar, cornstarch, apple cider, lemon juice, cinnamon and nutmeg while stirring constantly. After the syrup boiled for a minute we stirred in some butter and the syrup was ready to go.

Finally we toasted the French toast in a greased skillet until golden brown on each side. Then we topped the pumpkin treat with the syrup and nuts and were ready to go.

This was probably one of the fastest French toast recipes we’ve put together (either that or this is becoming old hat). It was sweet, it was flavorful and the nuts provided that salty contrast. Oh yeah, and the apple cider syrup…like apple pie. Mmmmmmm! It was good.

It is a strong contender for the championship and earned a good 3-1/2 spoons from me. Mr. N also enjoyed the French toast, especially the syrup. It was 3 spoons for him.

Miss A didn’t care for this one too much. She lapped up the syrup of course, but the toast itself didn’t garner her top marks. She claims it was a 9 spoon recipe, but then admitted she didn’t really like it. So in this case 9=2. (Only because the sauce was good.)

Now how did Mike rank this one? As you may recall he is a harsh critic when it comes to his French toast and doesn’t hand out top marks for just any recipe. The pumpkin French toast though – this one earned the full 4 spoons from our toughest breakfast food critic.

This one is definitely worth a try and just might go the distance come March Madness time. Until then, Happy Halloween. I’ve got a princess cowgirl and a scary werewolf who can hardly contain their excitement for tomorrow. I hope you all enjoy the day as well. And for our East Coast friends and followers – stay safe and know that you’re in our thoughts.

61 thoughts on “Tricks and Treats”