We hope you all had a wonderful Thanksgiving and a great weekend. We’ve been busy eating leftovers, decorating for the holidays and even squeezing in a trip to the circus. We’ll get back to our stateside cooking adventures and Portugal later this week, but first we thought we’d share this awesome recipe for using up some leftover cranberry sauce and pumpkin puree.

Before we get to our recipe for this Spiced Cobbler, however, we wanted to quickly mention that our Pumpkin & Couscous Rocket Salad was featured over at FoodPornDaily this weekend. It was a wonderful surprise to discover today. I about fell off the couch when I found out. So now that we’re feeling all spicy…

We began our cobbler by chopping six pears. We peeled them this time.

Then we gathered the leftover cranberry sauce (We recommend using homemade, but the canned variety will work.), the fresh cranberries, brown sugar and a bit of pumpkin pie spice.

We mixed everything together, poured it into a large casserole dish and baked it, covered, for 30 minutes.

While the cobbler was baking, we prepared the biscuit topping by sifting together whole wheat flour, sugar, baking powder, cornmeal and more pumpkin pie spice. In a separate bowl we mixed together pumpkin puree, a beaten egg and half-and-half. 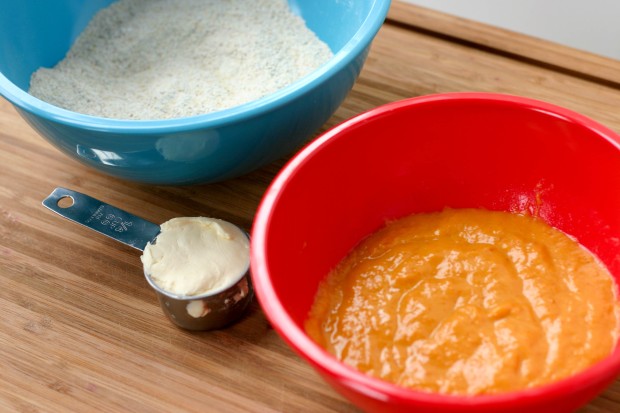 Then we cut the butter into the dry ingredients until we had pea-sized crumbs and stirred in the pumpkin mixture.

We removed the cobbler from the oven and spooned the biscuit batter over the top. We also sprinkled some turbinado sugar over the top.

We then baked the cobbler for another 35 minutes, uncovered this time, until the biscuit topping was cooked through and the cobbler was bubbling. Mission accomplished.

We actually whipped up some homemade whipped cream to serve alongside our cobbler. This was our first time attempting this and I have to say it took me way too long to whip this…something I’ll definitely need to practice. As Mike pointed out to me, the chef at the cooking school we frequent makes whipped cream in 45 seconds. (Let’s just say Mike’s lucky I think he’s cute, or he’d be wearing some of that whipped cream. 😉 ) I don’t think I’ll get that fast, but it turned out really good – and much better than the canned variety. Mmmmmm. Mr. N thought so too. He was more than willing to be my taste tester.

We were all really happy with our spiced cobbler. The flavors came together really well from the tartness of the cranberries to the spiciness of the pumpkin, and the pears added a nice touch of sweetness and texture. 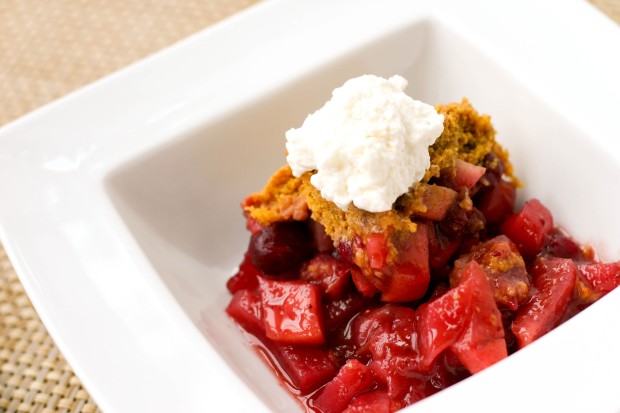 We brought the cobbler to our friends’ house over the weekend and had a solid 3 spoons from all four of the adults. It’s a great dessert and one that we’ll likely make again next Thanksgiving. That said, I wouldn’t pick it over Grandma’s cobbler…ever. As for the kids, Miss A gave it 3 spoons as well. She seemed partial to the whipped cream and the cranberries. Mr. N gave it 4 spoons since he “loved” it. And we even had two adorable little twin boys, who are almost two, eat it up. Now there’s a winner.

So if you happen to still have some leftover cranberries and pumpkin, and you’re feeling a little spicy, we recommend giving this a shot. It’s great for dessert (or even breakfast!).

48 thoughts on “Spicin’ Things Up”