Greetings from Spain!  Kristy has been known to throw in the occasional YouTube link to an old pop song, and while I’ve got the keys to the blog, it seems only fair to keep up the tradition.  (Side note: I let the VEVO channel keep running in the background, spinning ’80s pop tunes and within about four songs I got Rick-rolled.)  But today’s song is, I think, a pretty good one to have stuck in your head.


We love Spain, and we especially love Madrid, and we especially, especially love the rhythm of this wonderful city.  And please be assured, it is a night rhythm.  On the last night of our 2014 visit, we wound up in a cafe at 1:30 a.m., all four of us, with an early morning flight to catch.  We made it, easily, because somehow or another, as we wander our way through Madrid, we always seem to wind up in the right place at just the right time.

This time in Madrid, we rented a really cute little apartment in the Lavapies neighborhood, which is just south of the city center.  We arrived in the middle of the day from the airport, just in time to sleep. 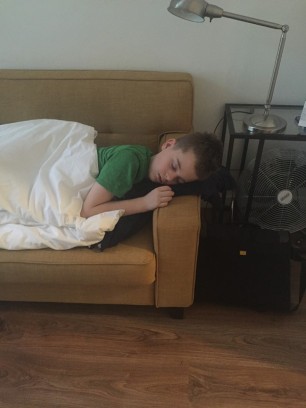 Jet lag had more to do with our naps than immediate assimilation to siesta culture, but as you can see, Mr. N and Miss A certainly found themselves in the right place at the right time.  Fortunately, we were up and at ’em before too long.

Lavapies is a scrappy little neighborhood, with a Bohemian spirit and an interesting collage of people.  For Chicagoans, it reminds me a little bit of Logan Square today, or Wicker Park 20 years ago.  It’s also perfectly located.  Our place was just a block and a half from the Reina Sofia (home of Spain’s most important painting), which is the southeast corner of the central city.  From there, if you don’t stop for tapas or churros, it’s a 20-minute walk to the Palace, the western boundary of downtown.

If you walk south, though, away from downtown, there is still much to explore and much to discover.

Our apartment hosts recommended cafelito as the best coffee place around, and we don’t disagree.  It’s a tiny little place, but a very crowded one–we originally couldn’t find four seats together.  Fortunately, a couple left just in time, or should I say in perfect rhythm.

The market in Lavapies is called San Fernando’s and we made a couple of spins through there on our visit.  It’s not as upscale as Mercado San Miguel, but fits the character of the neighborhood.  The kids had fun visiting all the vendors. Miss A even got an I-Spy book to practice her Spanish at a used book seller. 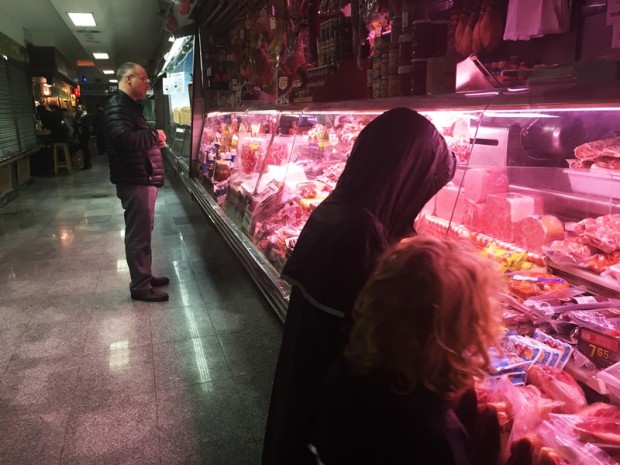 There was also another market just to the north of ours, called Anton Martin, but we didn’t spend much time there.  We did, however, hit a few streetside vendors right next to it.

It’s a good thing there are all these places around to shop for different food items, because, y’know, we write a food blog and it was time to try our hand at making tapas!

We hit three little shops (including the two you see here) to pick up ingredients to make two kinds of tapas back home in our little apartment.  We needed to go to multiple places because some stands do meats, others do fruits, and others do vegetables.  Plus that way, all of us, including Mr. N and Miss A would have a chance to order something in Spanish. 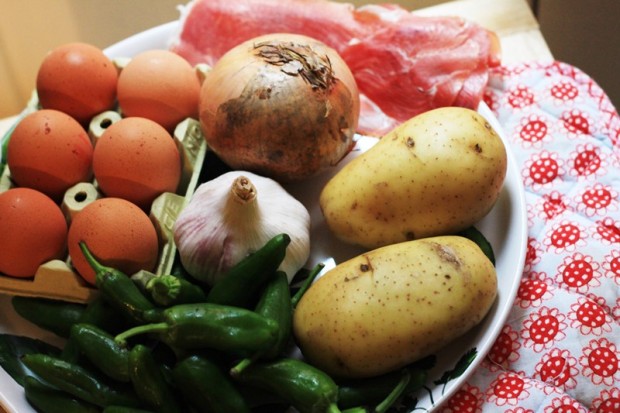 Today’s recipes are for huevos rotos (Spanish potatoes with broken eggs and ham) and piementos de Padrón.  We tried both of these at various tapas bars in Madrid, and they were both tasty, and not overly ambitious for our little apartment kitchen.

It was tricky cooking with so little counter space (and photographing with no natural light), but certainly not the toughest challenge we’ve ever faced. 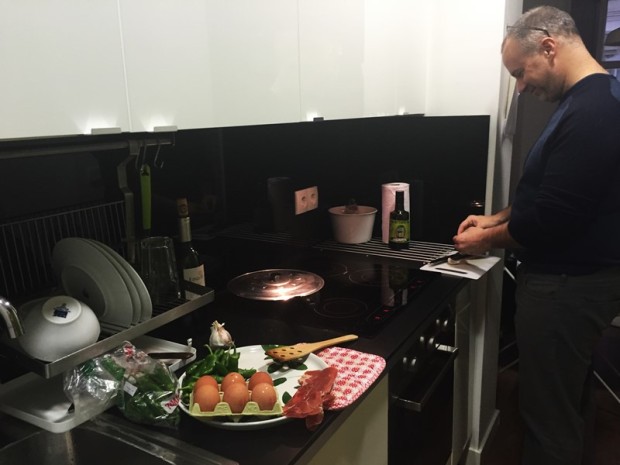 Our huevos rotos began with sauteed onion and garlic followed by sliced potatoes in the skillet. 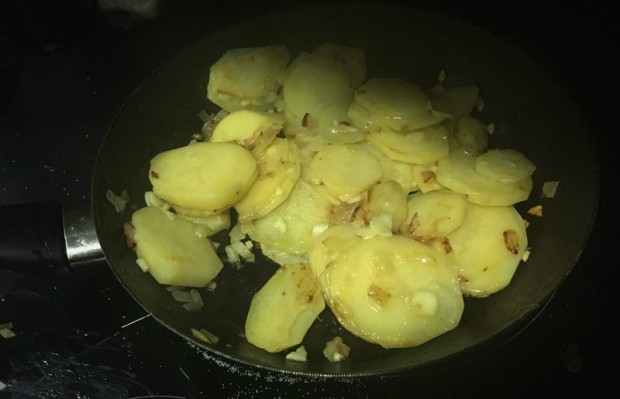 Those cook until done, about 25 minutes.  Meanwhile, the peppers just get a little bit of olive oil and a good bit of salt.  We used table salt because we weren’t sure where to find sea salt.  When we purchased salt at the market in our broken Spanish, we wound up getting a fairly large bag, but fortunately, it only cost 0,60 euros (note the comma!). 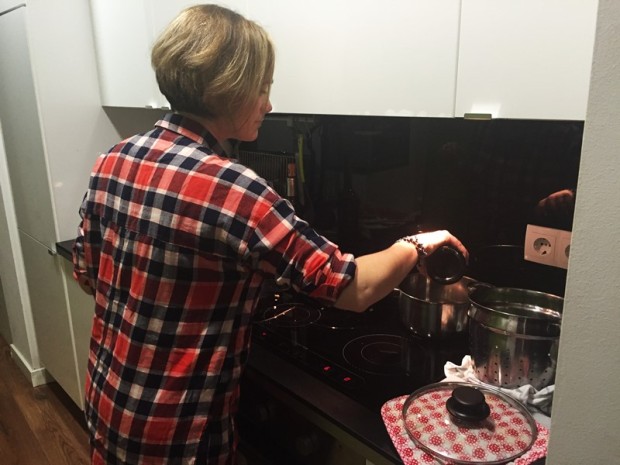 Once the potatoes are done, the eggs go in the skillet.  Careful not to break the yolks, not yet anyway. 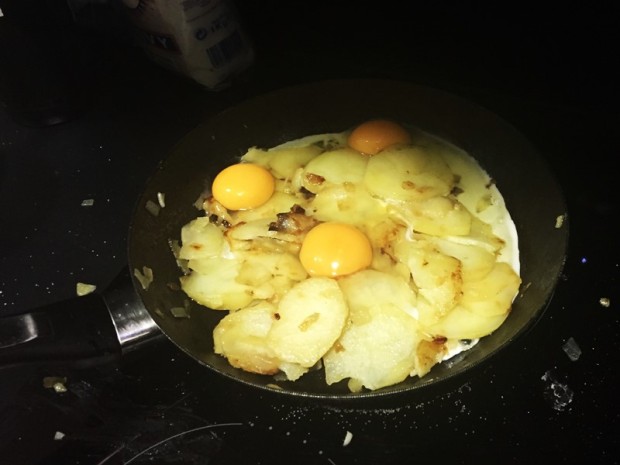 Meahwhile, the peppers cook until they start to blister.  Pimientos de Padrón look spicy, but they’re actually mild.   Just toss them in the olive oil occasionally.

Don’t forget about the eggs.  The yolk needs to be runny when you serve them. 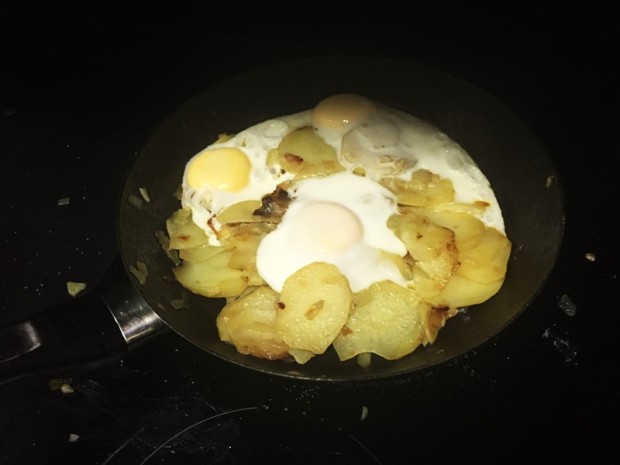 Once the eggs are done, the jamón gets spread over the top in little pieces. Jamón is cured and aged.  Lots of places serve jamón Iberico around here, which is much more expensive than some of the other kinds, but I don’t like it as much as jamón serrano, which is much cheaper. Jamón Iberico is too chewy for me.  We used a mix of a few different kinds of cured hams.

One downside about the rhythm of Madrid is it’s awfully hard to take good photos without much natural light, and by the time people get to eating around here, there isn’t usually much of that left.  Fortunately, the kids are awake at this hour.

Tapas are small-sized portions, but since we’re only making two dishes to feed our family of four, we made ración-sized portions. 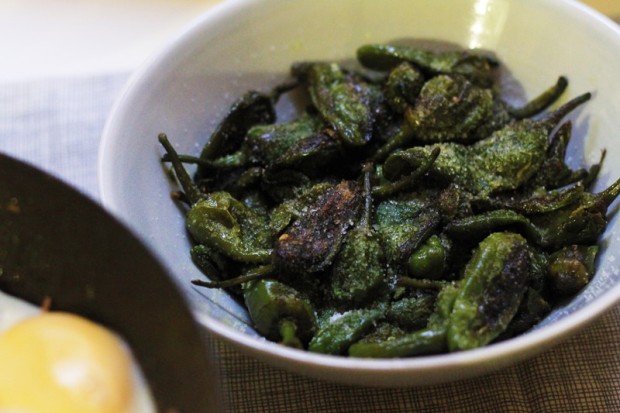 This left us with plenty to go around. 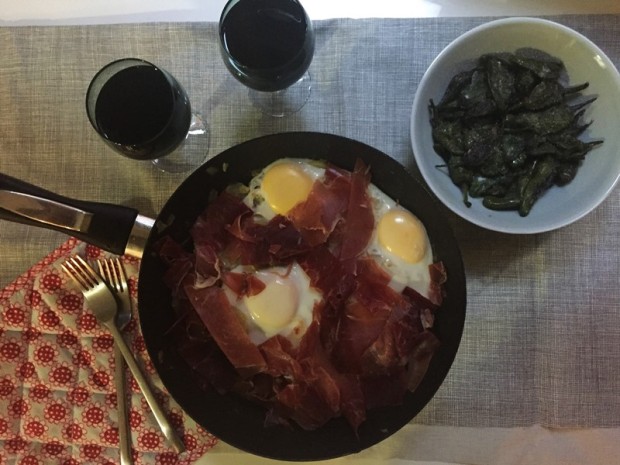 For the huevos rotos, just set the skillet on the table, break the yolks and serve!  It feels maybe more like breakfast, but they’re on just about every tapas menu around Madrid, it seems like.  We liked them in the restaurant, and we liked our version at home.  The huevos rotos got four spoons from Kristy and I, and three spoons from Mr. N and Miss A.  The peppers were three-spooners from Kristy and I, and two from the kids.  Not bad for a green vegetable without much else.

And not bad for our first crack at Spanish tapas–I expect we’ll try something more complicated somewhere down the line.  For now, I’m taking the advice of El Debarge to heart as we start this sabbatical.  Forget about the worries on your mind.  You can leave them all behind.   Man, when I was in high school, I certainly never thought I’d be quoting that song 30 years later.

35 thoughts on “The Rhythm of the Night”