At the start of the summer, on one of our little weekend getaways, the four of us sat down and made a list of things we wanted to do this season. Summer always seems to go so fast, and we’re likely to let it get away from us if we’re not careful. But we’ve found that by creating a wish list we’re more likely to actually get around to doing some of the fun things we thought up and less likely to forget.

Last weekend we realized that summer was once again passing right before our eyes and decided it was time to attack making Cornish hens (which was at the top of our “foods to make” list). We invited some friends for dinner and set to work. A co-worker had recently mentioned a recipe for smoked Cornish hens and I knew that’s what I wanted to do. We found our inspiration in a recipe from the Neelys over at the Food Network.

We started by creating a dry rub. I opened up the spice cabinet and just went to town. I knew I wanted to use some cardamom and then went from there… onion powder, sage, rosemary, sugar, cinnamon, salt and white pepper. We patted the hens thoroughly with the dry rub and let them sit for about an hour. In the meantime, we prepared a stuffing with barley, mushrooms, shallots, sage and garlic. 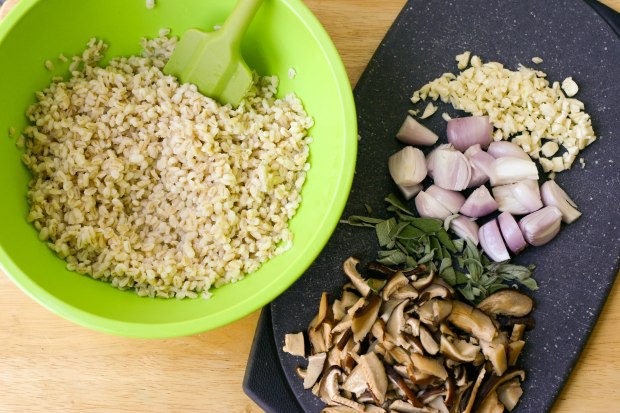 Then we threw in some crumbled bacon for good measure.

Next we used the Neelys’ recipe to create a basting glaze which incorporates shallots, butter, chicken broth, orange juice and apple cider vinegar. 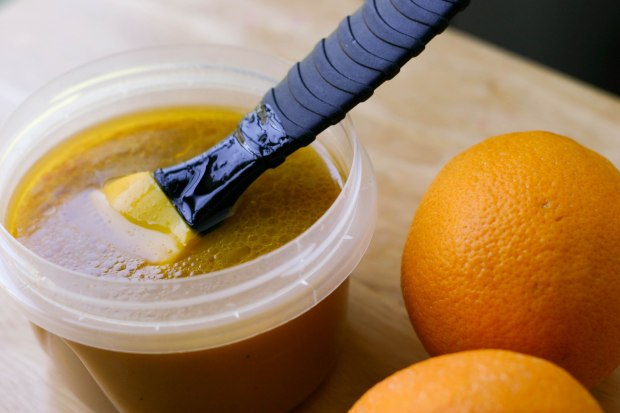 When the birds finished resting with the spices, we stuffed them up and placed them on the grill. Mike maintained the smoker at 250F. After grilling for about 30 minutes, he basted the hens with the sauce. He continued basting every 15 minutes for about another hour.

Miss A kept asking when the baby chickens would be ready to eat. I can’t blame her…the smoky aroma had us all chomping at the bit. Once the hens were cooked through, we let them rest and then served them alongside crusty bread and some of the prosciutto wrapped dates.

The Cornish hens were juicy, tender and wonderfully flavorful.

They were a big hit with our friends and with all of us. Mike and I gave the smoked Cornish hens a strong 3 spoons. Mike felt a more traditional stuffing would have been his preference. I enjoyed the stuffing and my only complaint was that I wish I had made some more to serve on the side. A Cornish hen doesn’t hold much stuffing.

Miss A gave her “baby chicken” 3 spoons; although she wouldn’t touch the stuffing. Mr. N gave the hens 3 spoons too, but also gave the skin 4 spoons. He loved the bites with the crispy, herb laden skin. Who wouldn’t?! I have to admit that was my favorite part too. 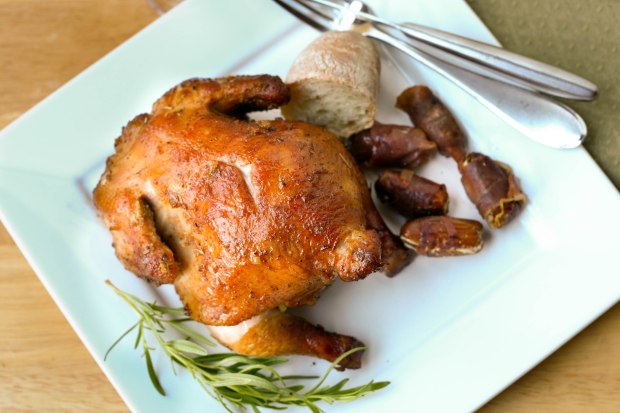 It was a great evening with good friends, wonderful food, crisp wine, a little tennis and an impromptu glow stick show by Mr. N and Miss A after the sun went down. A perfect summer night. And we definitely had more than enough hens to go around, so were able to freeze some for a fast meal once school starts up again. It will be nice to have a little taste of summer later this fall. Until then…we have a few more things to check off our summer to-do list and a bit more monkey around to do!

Summer fun at another new zoo.

Leave a Reply to Nami | Just One Cookbook Cancel reply