We’re busy getting ready for Thanksgiving weekend around here. Fortunately we don’t have too much cooking to do as the big day’s festivities will be at my aunt’s house, but we do have a lot of things going on this weekend. So we’ll keep this short and sweet. We made this dessert a few weeks back for a friend’s fondue party. It’s a kind of apple pastry which we’re calling our Iced Apple Stack. It makes use of the Ice Syrup we ordered over the summer. Again, if you don’t have ice syrup, maple syrup will work just fine.

We started the recipe by boiling some water and sugar.

We boiled it, swirling the pan every so often, until the syrup turns a dark amber color.

Next we removed it from the heat and incorporated a bit of the ice syrup into the saucepan. Then we poured it into a springform pan and swirl to coat. 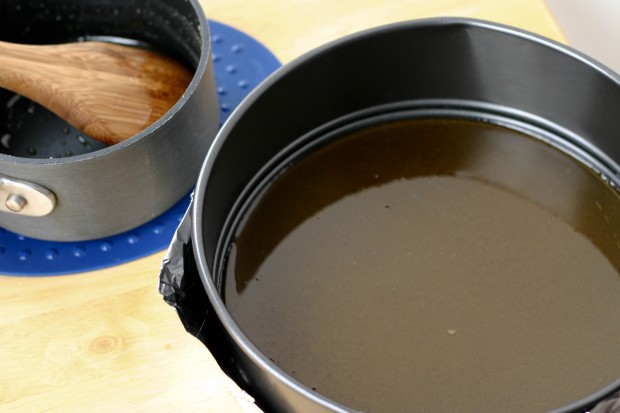 We left the pan aside and then mixed together some brown sugar and cinnamon. I found using my hands worked best. 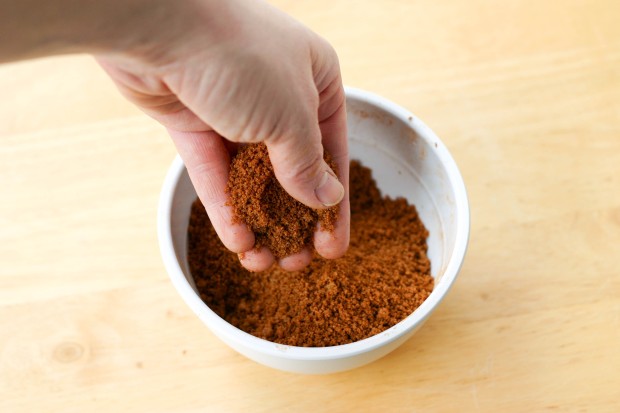 It was then time for the apples. We cored them and sliced them very thinly, using a mixture of McIntosh and Granny Smith apples.

To prevent the apple slices from browning until we were ready to use them we tossed them in a bath of cold water and lemon juice. 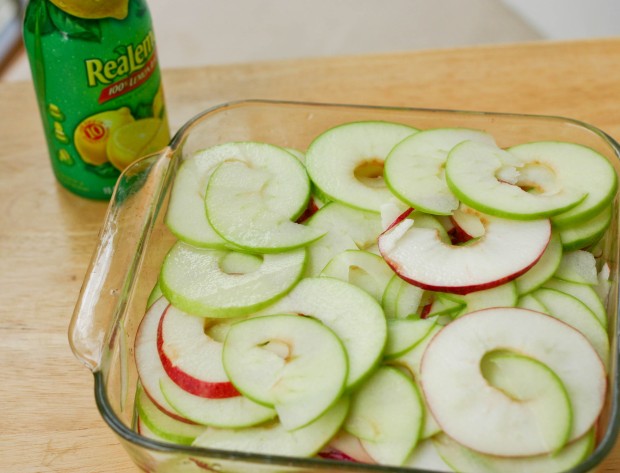 Next we placed the first layer of apples in a circle into the springform pan and then sprinkled it with the cinnamon and brown sugar. We also added another teaspoon of the ice syrup.

We followed this with another layer of apples and the cinnamon/sugar, but this time we omitted the ice syrup. Then we rolled out half a sheet of puff pastry and placed that over the apples in the springform.

Again we layered more apples, cinnamon/sugar and ice syrup over the puff pastry. 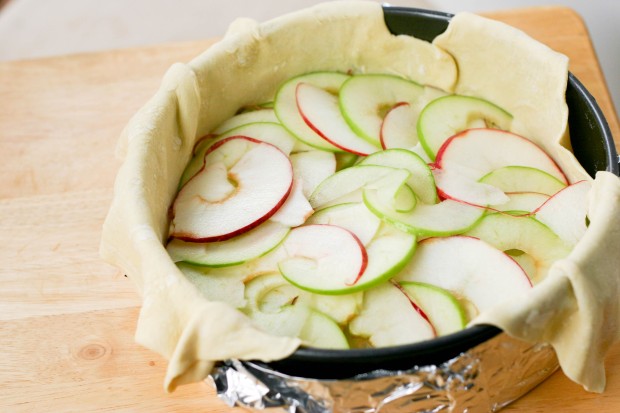 After one more layer of apples, cinnamon/sugar and no ice syrup. We added the other half of the rolled out puff pastry, cut away the overhanging pastry and topped it with slices of butter.

We then covered both the top and bottom of the springform pan to catch the drippings, and placed the apple dish into a roasting pan. We then poured boiling water into the roaster until it came halfway up the sides of the springform. 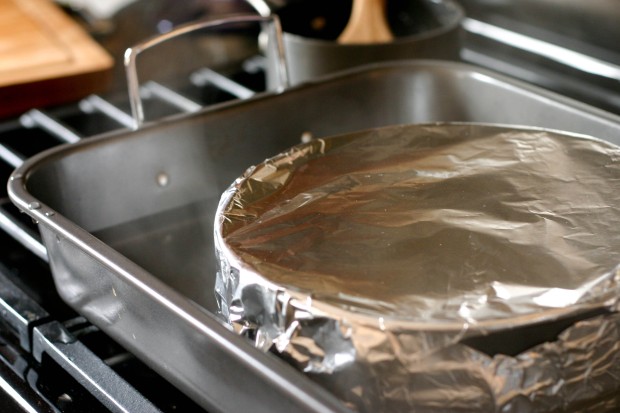 We baked the apple stack for an hour and a half at 325F. Once done, we removed it from the oven, took off the top foil and let it rest for a bit. Then we released the sides of the pan, placed a plate over the top and flipped our pastry so that the bottom became the top. 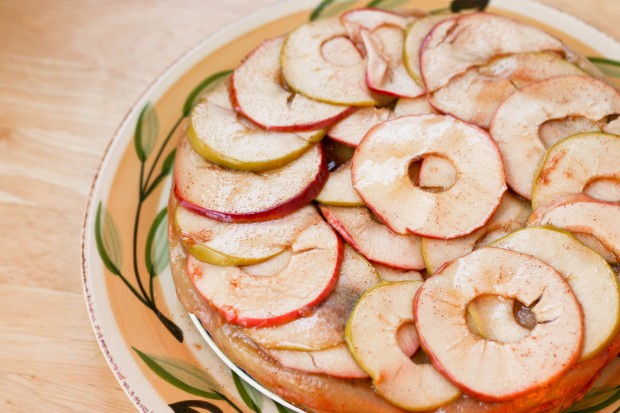 The result was this beautiful red and green apple stack dripping with sweet cinnamon and sugar syrup. It certainly looked impressive.

The dessert seemed to go over well at the party. Everyone said they enjoyed it. Mike said it was a 3 spoon dessert. 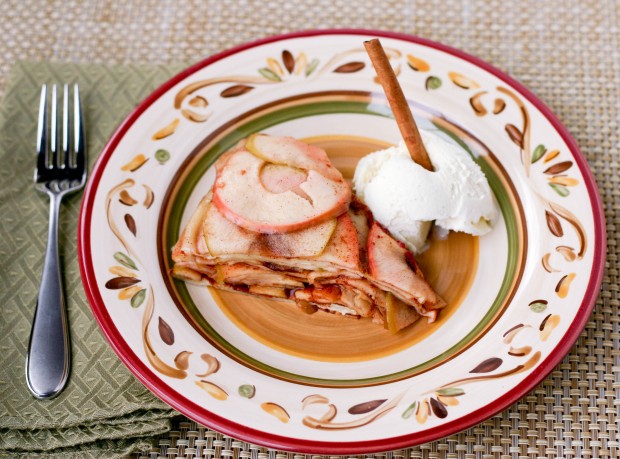 I, however, was a little disappointed in it. I think it has all the makings of a great dessert, but the apple peels threw me. I think I might have enjoyed it more had we peeled the apples; although then we would lose the beautiful red and green look of the dish. 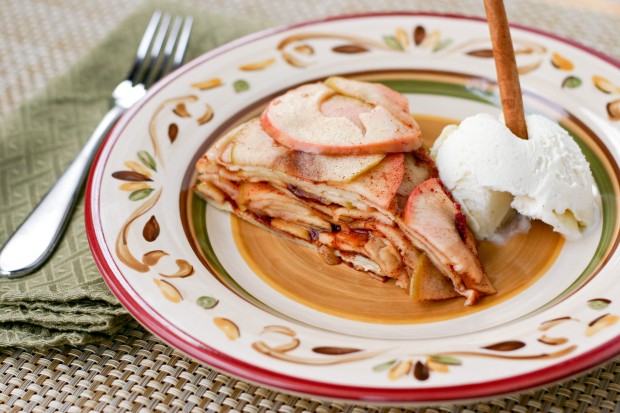 Mike agreed with me on that point – the peels did take away from the overall greatness. I took the leftovers to my parents’ house the next day and they said the same thing. The flavors were wonderful…the peels not so much. 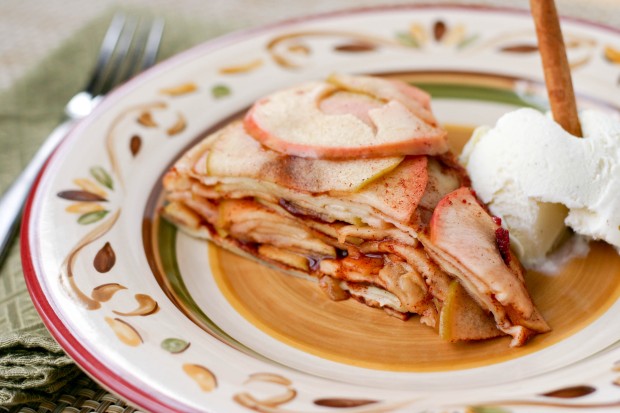 So if we make this again, I think we’ll sacrifice beauty for flavor. As for the kids, they didn’t even want to try it. They’re not big fans of unpeeled apples. 😉 Maybe next time.

Happy Thanksgiving to all those celebrating this week! We’ll post the winners of our drawing tomorrow evening. If you want in the giveaway, make sure to drop by and leave a comment on that post before noon. Cheers!