That’s what my Grandma always said when she wanted a kiss from one of us grandkids, “Give me some sugar.” Well, in this case, we’re going to be giving you some real sugar – and serious amounts of it. So who’s ready for some dessert from North Carolina?! 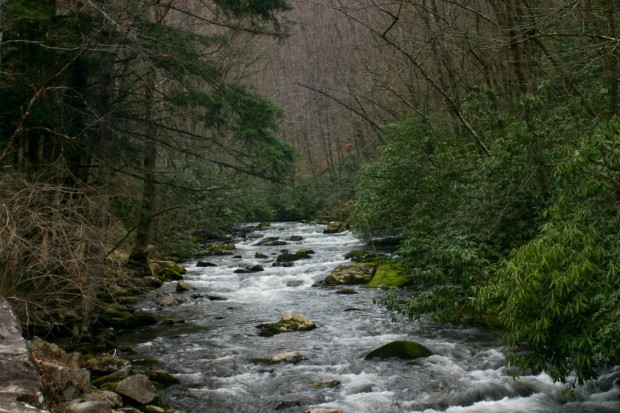 While Mike was at his conference in Charlotte, I treated myself to a relaxing day all for me. I went running, shopping, enjoyed a fantastic lunch al fresco and then had a mani/pedi. It was during my mani/pedi that I got a wealth of information about things to do and see in Charlotte. My salon rep was a fantastic conversationalist and an absolute joy to spend the afternoon with. She, in fact, reminded me of my Grandma.

The one thing that she strongly recommended was a visit to the Moravian settlement near Winston-Salem. She talked about the Moravian sugar cake and how absolutely delicious it was and practically a necessity for the holidays. You can imagine my blog wheels were instantly turning. Mike and I tried to configure our route home through the Winston-Salem area, but we didn’t quite make it that direction. And while we did manage to find some Moravian sugar cookies, no cakes…

So when we started on this culinary tour of North Carolina, I knew that Movarian Sugar Cake was on our list. First of all, this was a fantastic experience to learn about the Moravians which was a culture and religion completely unknown to me. It was also another great opportunity to practice with yeast dough.

We started the recipe by creaming together shortening, eggs, sugar and salt.

Next Mike scaled the milk for us. Did you know that scalded milk is: …milk that has been heated to 82 °C (180 °F).[1] At this temperature, bacteria are killed, enzyme in the milk is destroyed, and many of the proteins are denatured. Since most milk sold today is pasteurized, which accomplishes the first two goals, milk is typically scalded to increase its temperature, or to change the consistency or other cooking interactions due to the denaturing of proteins. 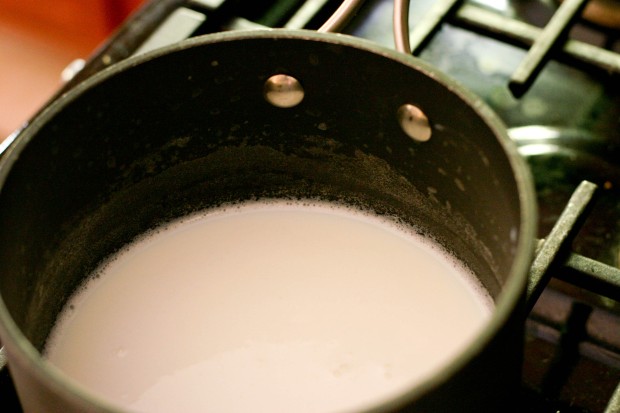 We then added our proofed yeast, scalded milk and mashed potatoes to the creamed dough ingredients. You can use homemade mashed potatoes for this recipe, but for our purposes we just whipped up a cup of the instant variety. One thing to note, if you’re using instant, replace any milk required with water and omit any salt required.

Next we kneaded the dough – well, the stand mixer did. I wasn’t taking any chances with my dough-killing kneading skills and Miss A wasn’t on hand to help at the moment. Once the dough formed a soft, smooth ball we placed it in a greased and covered bowl to rise.

Wouldn’t you know, three hours later the dough had risen – and rather nicely too. I think I have found the secret – have something or someone else do the kneading for me.

The kids were now home (though Miss A had fallen asleep) and Mr. N was ready to punch the dough down for us. 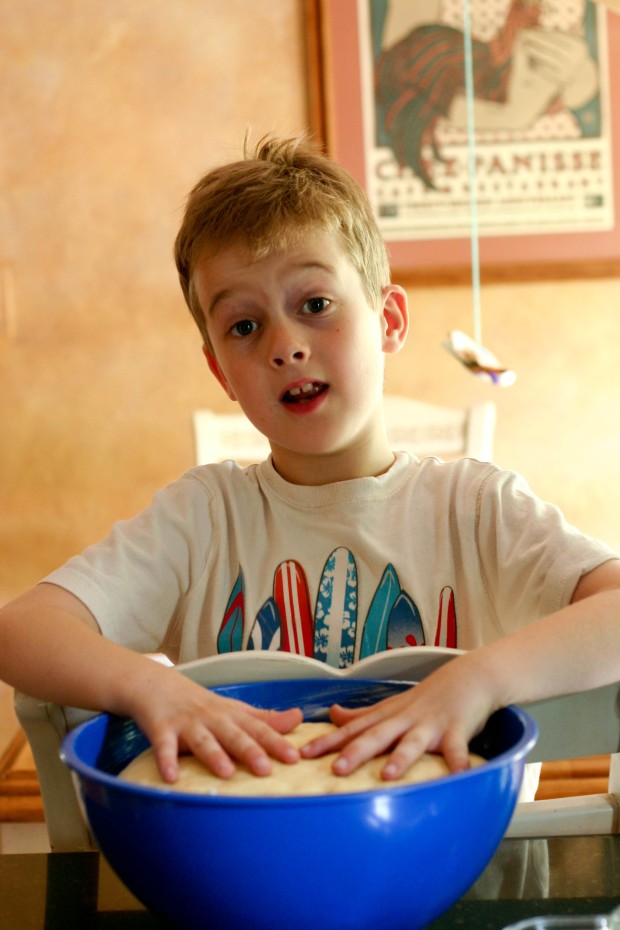 Once the dough was punched down, we divided it in two, spreading one batch over a large jelly roll pan (the traditional method) and another into a 9×13-inch baking dish. We then set the dough aside to rise for another 1-1/2 hours. 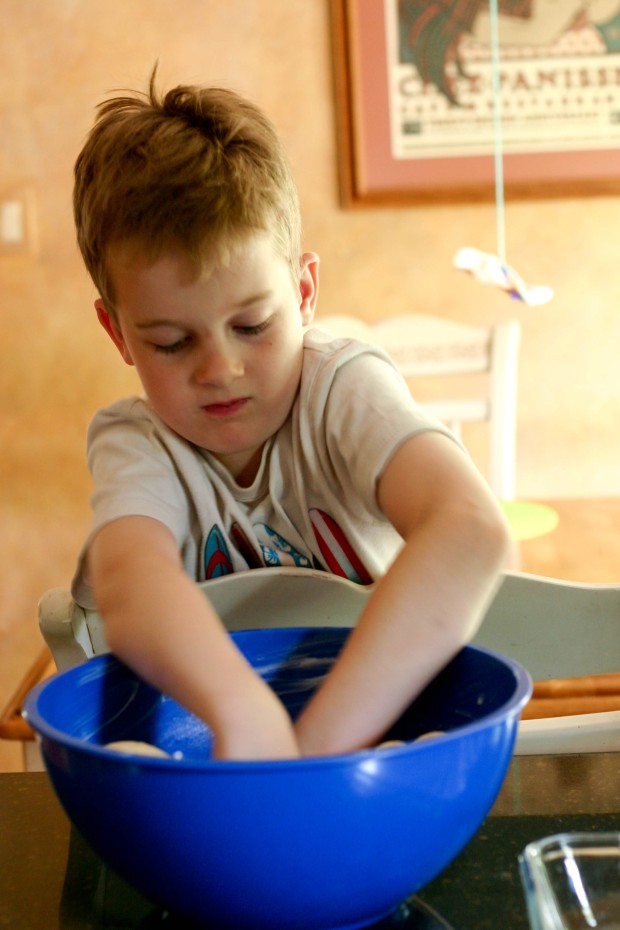 Our dough rose beautifully again and our Sleeping Beauty was now ready and waiting to use her favorite kitchen tool, the pastry blender. Miss A used the pastry blender to crumble some butter, flour, brown sugar (1 pound worth!) and cinnamon for the topping. Doesn’t that just sound delicious, and it gets better too!

Before crumbling the topping over the dough, Miss A and I used our fingers to make small circular indents in the dough about an inch apart.

We then, and now here’s where it gets better, spread copious amounts of melted butter on the top of the dough before sprinkling over the brown sugar topping. 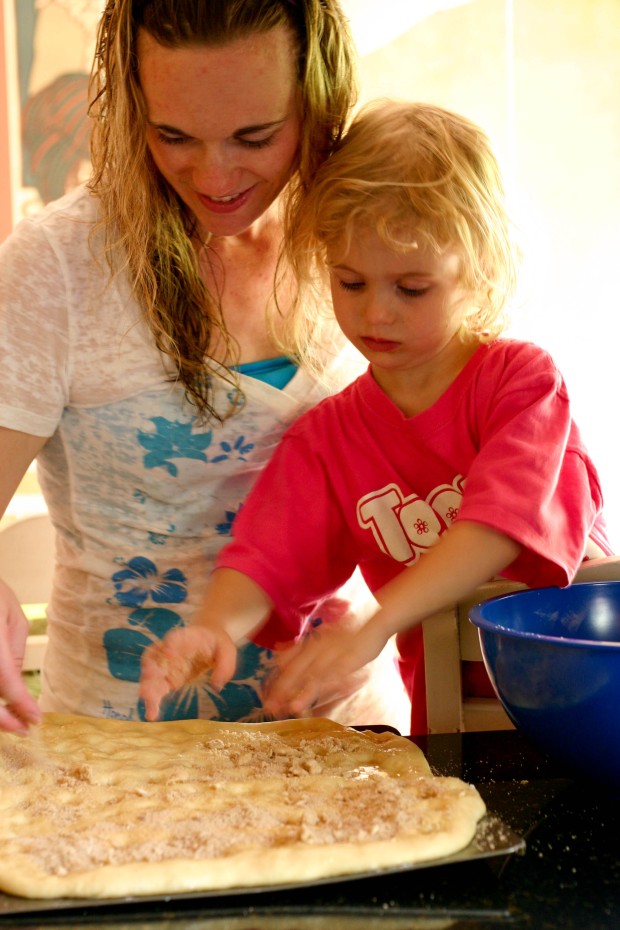 The sugar cake then baked at 350F for about 15 or 20 minutes at which point it was golden brown and delicious.

The cake smelled wonderful and looked just like a warm, fresh coffee cake. The traditionally spread cake (on the jelly roll pan) was roughly an inch in thickness and beautifully done. I was a bit nervous about the cake done in the casserole baking dish as it was about three to four inches thick. I was afraid it would be too dry, or not cooked all the way through, but it too was done to perfection and quite delicious. 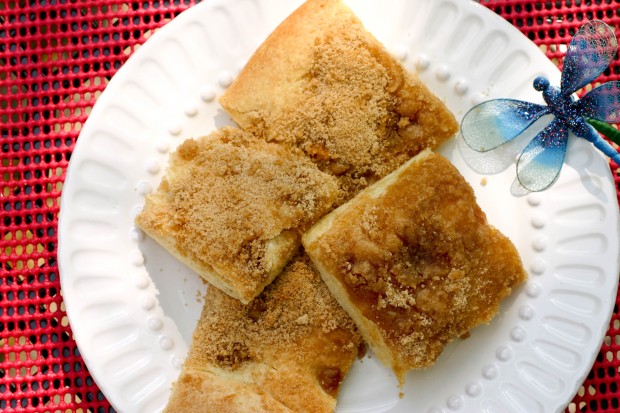 The thinner cake was sliced up for a Memorial BBQ at my sister-in-law’s. It had the consistency of a coffee cake and was warm, sweet and delicious. Not a single slice was left at the end of the day (and there were only 10 of us there).

Fortunately (or unfortunately depending on how you’re looking at it) this recipe makes a double batch and each batch makes about 16 to 24 servings. So despite our best efforts to finish it off on Memorial Day we still had a lot left at home. Being as this was a strong 4 spoon dessert for Mike and it received another 4 spoons from each of the kids, we knew we had to get more of it out of the house. So I took some into the office this week too.

It disappeared there too. And while I thoroughly enjoyed the Moravian sugar cake, it gets a solid 3 spoons from me. It’s wonderful, it’s delicious and it’s a great dessert. It’s just not one I’m going to hide in the freezer, crave and eat for a nightly snack. Those desserts get my 4 spoon ratings. 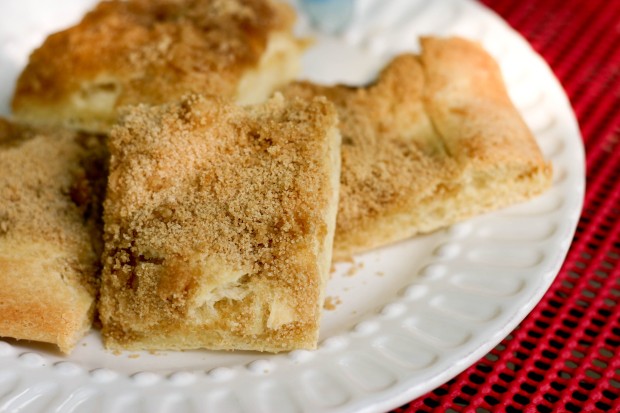 So there you have a Moravian sugar cake. It’s definitely worth the effort and would make for a great brunch item served to guests. Or for your kids… 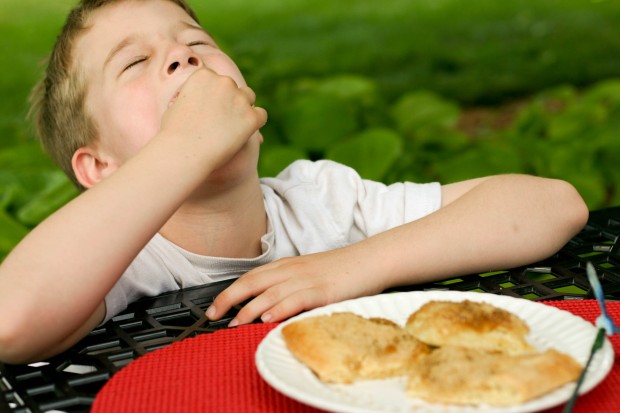 And if you don’t believe me, here’s one more shot of Mr. N waiting, hoping that Miss A won’t like her taste and will give it to him. Unfortunately for him, Miss A loved the sugar cake. Fortunately for him there was plenty more inside.

34 thoughts on “Give Me Some Sugar”