Portugal. Pork chops. Pomegranates. Portobellos. Parsley. How’s that for a lot of P’s? Who knew dinner could be both delicious and educational! Well, maybe just delicious. Miss A wasn’t really into helping with this one; although she and Mr. N kept passing through the kitchen stealing pomegranate seeds. (But who could blame them! Yum!)

This past weekend we made another Portuguese dinner, Stuffed Pork Chops with Pomegranate Sauce. We chose this recipe not only because it sounded delicious, but because it featured pomegranates, a fruit we had never used or eaten at home. We started by preparing the stuffing for the chops with portobellos, a shallot, parsley, garlic, olive oil, bread crumbs and Gruyère cheese.

First we heated the oil in a large skillet and then tossed in the shallot and sautéed it for a few minutes. Then we tossed in the portobellos, the garlic and seasoned with sea salt.

When all the liquid from the mushrooms was absorbed we added the bread crumbs and parsley.

Finally we tossed in the Gruyère, added the stuffing to a bowl, seasoned it with ground pepper and set it aside to cool.

Next we prepped our pork chops. We selected boneless chops that were about 3/4-inch in thickness.

After trimming the fat from the sides, we used a sharp knife to make cuts into the short-end of the chop and wiggle it all the way in to form a pocket. We then stuffed the pockets with the portobello stuffing we had set aside.

We sealed the chops with toothpicks and melted a few tablespoons of butter in the same skillet we used for the stuffing. Then we browned the pork chops on both sides.

When the chops were good and brown, we moved them to an ovenproof dish and tossed them in the oven to bake at 375F for 35-40 minutes. While the chops were baking we prepared the pomegranate sauce. The kids popped in to roll the pomegranates to help bring out some of the juices. They thought that looked like fun – and it was until Miss A got a little wild and chucked one onto the floor, splitting it in half. That was a nice little juicy mess, but fortunately it stayed pretty well in tact and we were able to salvage the seeds.

We then seeded and juiced the pomegranates. We followed a great tutorial over at Tori’s blog, The Shiksa in the Kitchen, and then gathered the rest of our ingredients for the sauce – sugar and white wine. 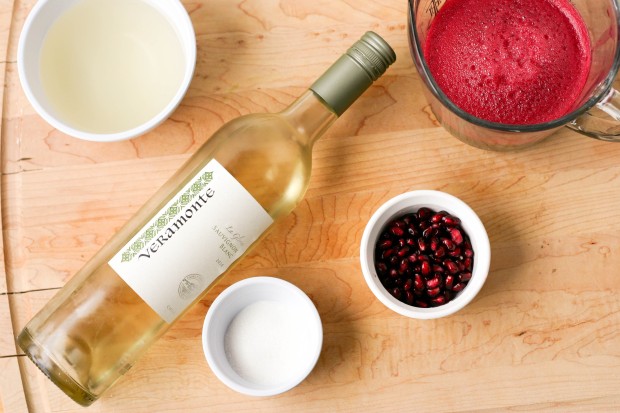 To prepare the sauce, we added the wine to the same skillet we had used and let it boil until it was reduced by a third. We then added the pomegranate juice and sugar, again letting it cook down by a third. Next we turned off the heat and set the sauce aside until the chops were done. When the chops were cooked through we removed them from the oven and placed them on a serving dish. 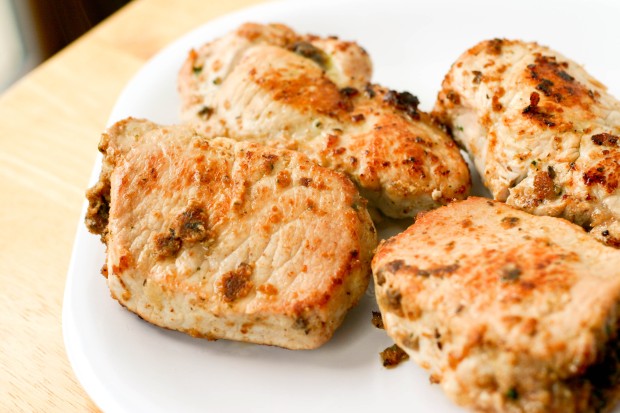 We then added the juice from the oven dish to the pomegranate sauce and brought the sauce back up to a low boil over medium heat. Finally we whisked in a bit of cornstarch and water until the sauce thickened.

It was then time to serve the pork which is best sliced crosswise and topped with pomegranate sauce. Doesn’t that look good?!

We served our pork chops with wild rice and fresh spinach. 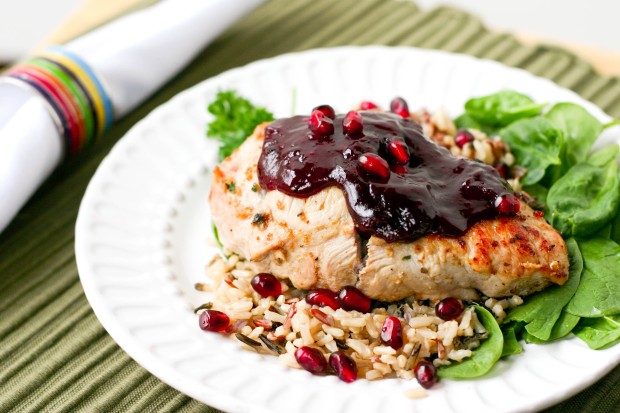 And boy was it good! It was a very satisfying meal, full of a variety of flavor with the tangy pomegranate sauce complementing the salty mushroom stuffing. 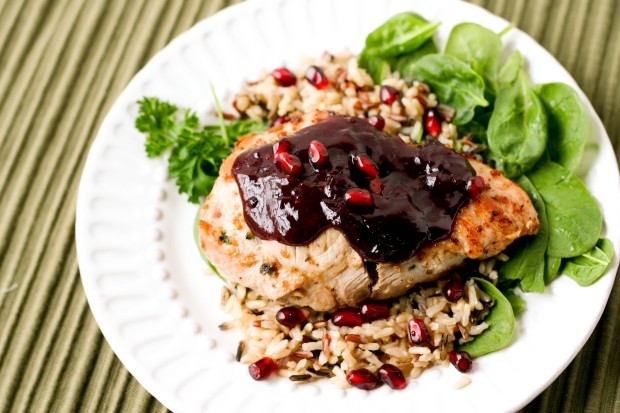 The Portuguese chops were a hit in one way or another all around. Mike and I both gave the chops a solid 3 spoons. This is easily a meal we’ll make again. Mr. N also gave them 3 spoons. He liked the pork chops (with the meat cut away from the stuffing) with the pomegranate sauce. We couldn’t hide the mushrooms from him in this one, so the stuffing didn’t go over real well. Miss A also had parts of the meal she really enjoyed. She gave the pomegranate sauce 5 spoons plus 15, in other words, 4 spoons. She gave the pork 2 spoons. She thought it was ok. Then she gave the bites of pork with stuffing 1 spoon, because she “hated” it. But hey, the kids ate the majority of the meal, so we’ll take it!

Later this week we’ll have some fun holiday desserts and then we’ll return next week to wrap up our stint with Portuguese cooking. In the meantime, make sure to stop by and leave a comment on our Whole Grain Banana Bread post for a chance to win a lovely little prize.