You may remember a few weeks ago, Miss A held her giveaway in which the winner got to pick our next international destination. Well, now that we’re back home and in the swing of things (until school starting next week throws us out of swing again), we began our Japanese cooking adventure.

I have to admit, outside of sushi, none of us knew much about Japanese cuisine. The only thing Mike remembered was tonkatsu which he used to order when he ate at sushi restaurants with his parents. Fortunately our prize winner, A_Boleyn,  sent us several suggestions. Thanks A_Boleyn! So for tonight’s menu we have Tonkatsu, EggplantKatsu and Katsudon.

But first, a few weeks ago we featured our go-to weeknight sandwich. When we did, the Food Doctor from Chef in Disguise aptly quipped about my super hero cape. Well, Mike’s mom didn’t miss a beat and when we returned home from vacation I was presented with this awesome cape!

I’m not sure, but I think it made this dinner even better. First we started with the tonkatsu and eggplant katsu – or fried pork and fried eggplant. We opted to try a bit healthier version and used only egg whites and panko for the coating. Mr. N took care of separating the egg whites for us.

We started with the eggplant to prevent any potential contamination from the pork. First we sliced about half of a large eggplant.

Then Miss A and I dipped the slices in the egg whites and panko. (Note her lovely choice in eye-wear and my awesome cape.) 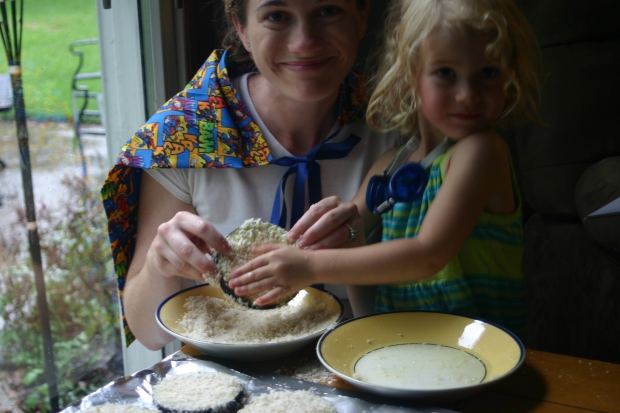 Once the slices were coated, we set the eggplant aside to begin the pork. 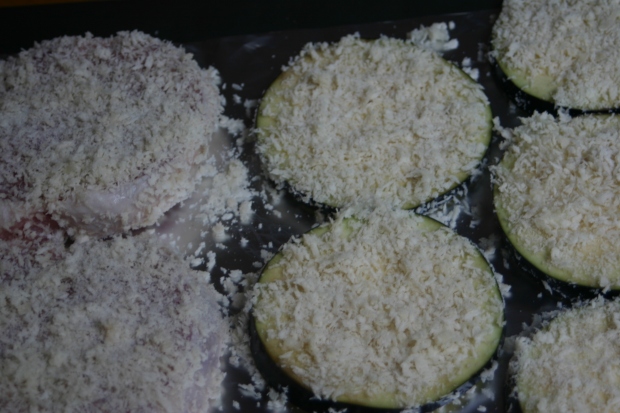 We used boneless pork chops and this time dad got in on the action, dipping them in egg whites and panko.

We also let dad handle the frying where we again opted to tone down the calories. We fried the eggplant and pork (separately) in a bit of oil, rather than a deep fry immersion. The eggplant fried for about 15 minutes, flipping once.

The pork took about 5 minutes per side.

We sliced about half of the eggplant and pork into strips and set it aside. We then sliced the remaining tonkatsu and eggplant katsu to add to our donburi, or Japanese rice bowl dish.

Next we added the donburi sauce to a skillet and tossed in some sliced onions. 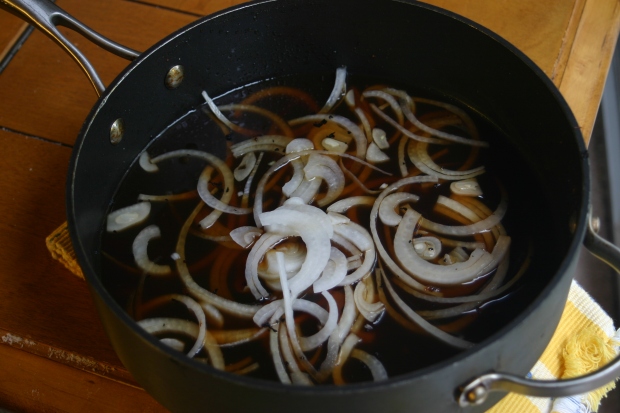 After cooking for a few minutes we added the sliced eggplant katsu and tonkatsu to the skillet and cooked for another three minutes or so. Lastly we whisked together three eggs and poured them over the contents of the skillet, covered and cooked for a final two minutes. We then divided the skillet into fourths and served it over Japanese rice topped with green onions. And there you have the katsudon. 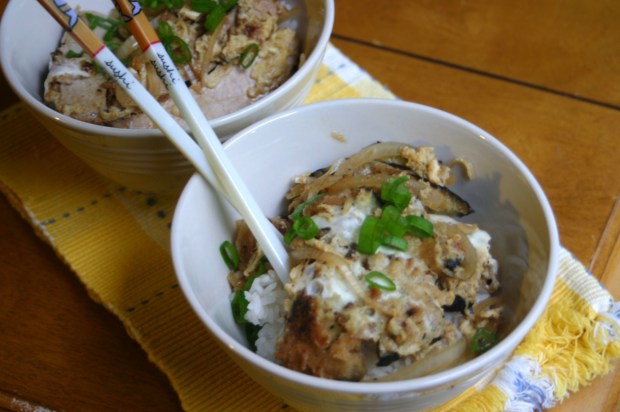 Dad and the kids ate the tonkatsu version, while I ate the eggplant version; but after sampling a bit of each, both dad and I preferred the eggplant katsudon to the pork. I’m even thinking next time I could just roast the eggplant, skip the breading and get an equally tasty meal with even fewer calories.

Both dad and I gave this a solid 3 spoons. I was even teetering between a 3 and 4 spoon rating. The kids weren’t quite as happy with it; although they gave it an honest shot. They only ran in with 1 spoon. I think mostly because they’re not big on onions or rice.

As for the rest of the tonkatsu and eggplant katsu, we served it with a tonkatsu dipping sauce which was much more up the kids’ alley.

Both Miss A and Mr. N gave this version a 3 spoon rating. Dad and I only about a 2 spoon. We liked the katsudon much better. So it actually all worked out quite well, there was something for everyone. Our first foray into Japanese cuisine was a fun and successful little adventure – which of course wouldn’t have been complete without a little dessert.

We all enjoyed our Mango Mochi from Trader Joe’s. 🙂