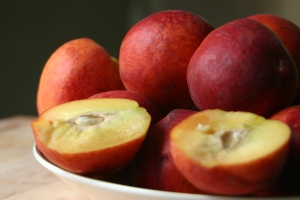 The humble pie is for me because, well, he did it again. We had our greatest number of hits for ChefDad’s post last night. (Although I am suspicious that he was driving up the hits from his computer. 😉 ) I just hope all of this success doesn’t go to his head, but who am I kidding – it wasn’t his modesty that first attracted me some 14 years ago. In all seriousness, even I enjoyed yesterday’s post and I think dad’s earned the keys to the blog controls every now and again. But for now back to the Peach State – and back to dessert!

While we didn’t make a pie tonight – it was close. Georgia being our state for this week, we knew we had to make something with peaches. How could we not?! So today, for my dad, and for Miss A who was not fond of the shrimp and grits, we made a Georgia Peach Cobbler. We adapted this particular recipe from the one found over at Vintage Victuals, mostly because it sounded delicious and easy. Really – very easy.

We started with about 10 fresh peaches. 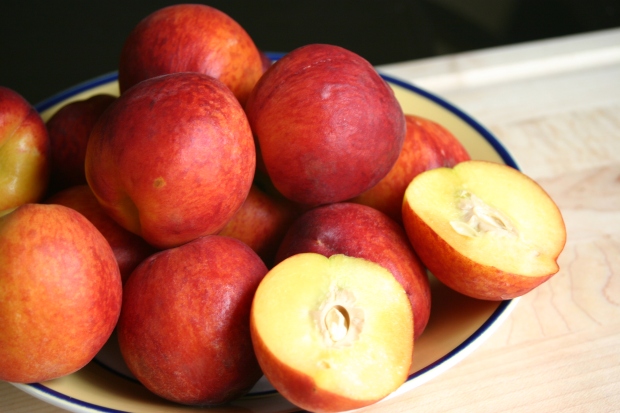 We peeled the peaches and sliced them using an apple corer (which made the process much faster). We then placed them in a measuring cup and when we reached 4 cups of peaches we added 1/2 cup of white sugar. 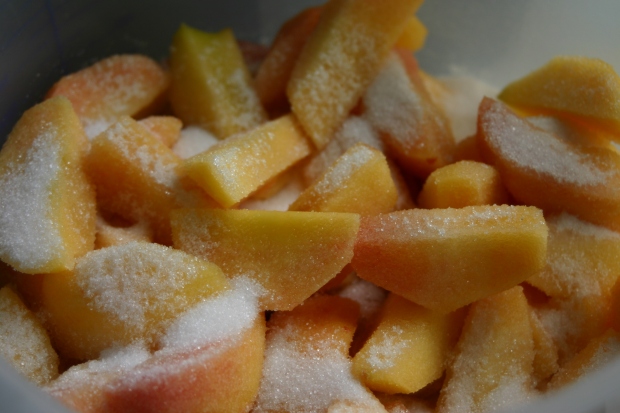 We covered the peaches and put them back in the fridge for a few hours until the juices were good and runny. This part of the prep was really the most involved it got – peeling and slicing. As Mr. N would say, “Easy peasy.”

After the peaches were juicy, we preheated the oven to 350F and placed a 9″x13″ baking dish in the oven with a stick of butter to melt as the oven warmed up. 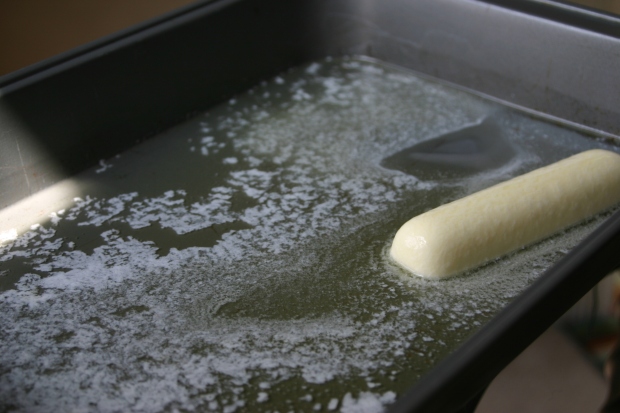 In the meantime, Miss A got to work with her pastry blender. She combined the flour, sugars, salt and baking powder. 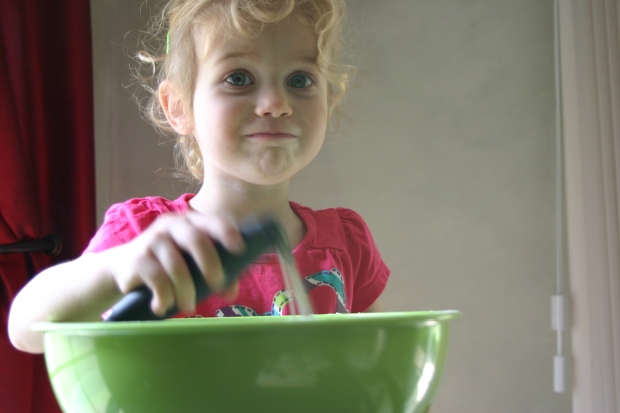 Next Miss A added the milk and vanilla and we stirred it together until it formed a smooth batter. 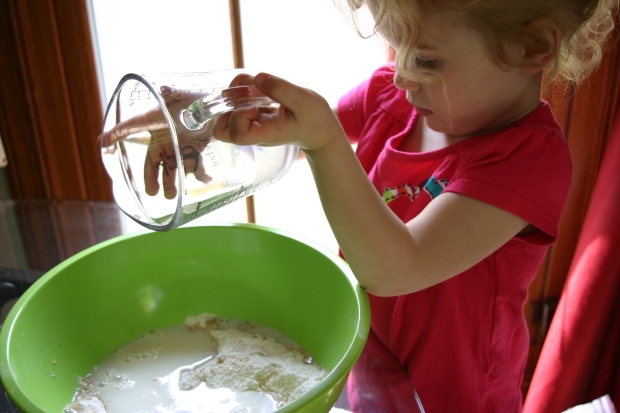 Now to wrap it up – we took the baking dish out of the oven and poured the batter over the butter. No stirring is necessary – in fact you shouldn’t stir this at all. 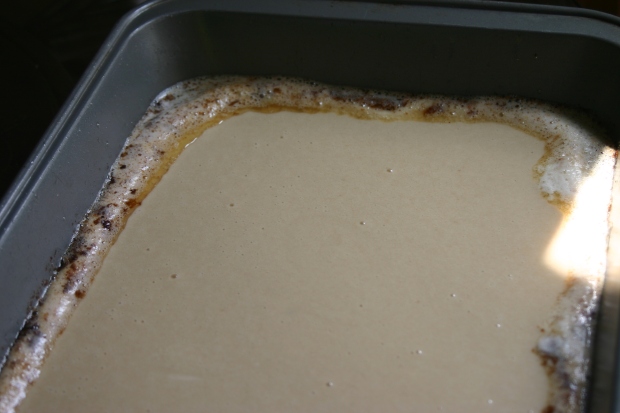 Next we took the peaches from the fridge, added them over the batter and sprinkled with cinnamon. Again there is no stirring. 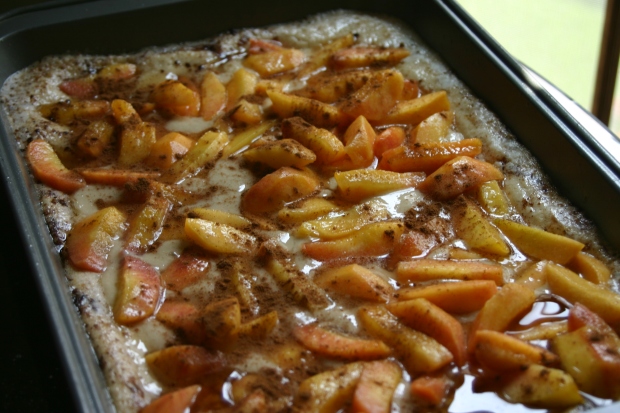 The cobbler then goes directly into the oven. We baked ours for about 40 minutes when the batter was set and the crust, golden brown. 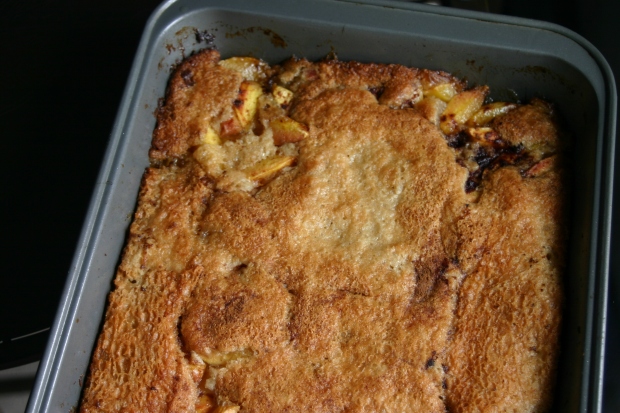 I couldn’t believe how easy this dish was and that it actually turned out well. I have to admit I was skeptical of not stirring the ingredients, but the pastry bakes right up over the peaches and voila!

Our Georgia Peach Cobbler was a big hit. Probably the best new dessert that we’ve made yet. It easily got 4 spoons from all of us – especially Miss A. She said it was really, really good; so I think we’ve restored her faith in the South again. 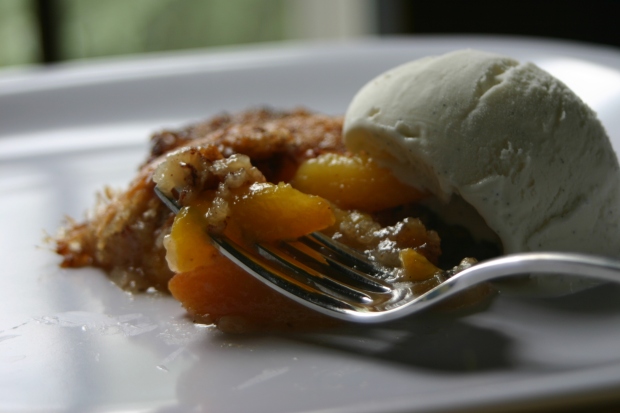 We brought the cobbler to my mom’s this evening and when we left there was one piece left. Knowing my dad, it won’t last the night. If you like peaches – heck, even if you’re not a big fan of peaches like me – this is wonderful, and best served hot with vanilla ice cream!