Well here it goes…our first attempt to try new recipes from around the globe and venture into the world of blogging. Mr. N calls it “cooking around the world.” He was the first to select our cooking destination, and our budding little foodie selected Mexico. We didn’t want to pick the usual suspects (burritos, tacos, enchiladas or fajitas), so instead we picked a more obscure recipe (at least it was unknown to us) – Cinnamon Fried Chicken with Roasted Potatoes. It was deemed an “easy” recipe – with a 6-year old and 2-year old in the kitchen we’re likely to pick the “easy” options for quite some time. The prep was definitely made for the little ones. Both Mr. N and Miss A loved getting to measure the spices, which included flour, cinnamon, cayenne pepper, nutmeg, ground cloves and salt. Miss A took a liking to it immediately and wasn’t afraid to double-dip her stirring spoon. 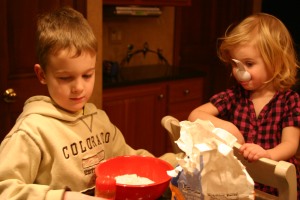 (Fortunately no one has a cold this week!) Mom and Dad cleaned and dipped the chicken breasts (don’t want to spread raw chicken germs around the house), and the seasoned chicken with potato wedges were tossed with canola oil and placed in a roasting pan.

The only downside of the recipe was that it took an hour and 15 minutes to bake (on the convection setting) and that made for a long, hungry wait. When we make this again, we’ll start it much earlier! About 20 minutes in to the baking, the aroma of cinnamon, cloves and nutmeg filled the kitchen. We were off to a good start. When we finally sat down to eat, the kids were definitely hungry (and willing to eat anything!). Fortunately the meal was a big hit; although the potatoes, while I enjoyed them, weren’t as highly regarded as the chicken. Everyone seemed happy with our first adventure and agrees it’s one to keep in circulation. Mr. N gave the chicken our highest honor of 4-spoons, Mom and Dad agreed it was worthy of 3-spoons and Miss A – well, she ate it so we’ll say she agrees with Mr. N and gives it 4-spoons. We’ve got one more week, and one more meal, of Mexican cuisine. I think we’re all looking forward to it already!