Last night was our second Mexican adventure. Since it’s Mr. N’s pick we let him guide the recipe choice. He was happy with our chicken from last week, so opted for another chicken recipe. This week we picked from the “hard” section of the recipes (gasp!) – Key Lime Chicken. Fortunately it wasn’t really that hard. The biggest challenges were the grocery shopping and the planning. Key limes, chipotle peppers, tomatillos aren’t readily available at our grocery store. So this week Ms. A and I hit a more worldly grocery store and found most of our ingredients and some grape flavored bubble gum which to my knowledge is only found at this particular store. As for Ms. A, she was particularly taken with the key limes – “they are tiny like me!” Grape bubble gum and tiny key limes – we were off to a good start.

We only had a few deviations from the recipe this week – the tomatillos (the recipe called for canned, we opted for fresh), the chipotle pepper (the recipe called for fresh and we could only find canned), and we substituted canola oil for the vegetable oil. Now for the challenging part – the prep. The recipe calls for a marinade which includes a homemade green salsa. So late Thursday night the hubby and I whipped up the salsa recipe so that it could chill overnight. It was a very easy recipe and the cilantro smelled great! Then Friday morning Ms. A and I prepared the rest of the marinade. She especially enjoyed juicing the lemon and getting to run the food processor. 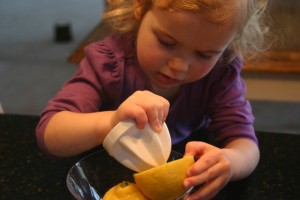 Ms. A even stepped out of her usual cautious box and tried some of the marinade which she claimed to like! After it was all mixed up we poured it over the chicken and left it to refrigerate the rest of the day.

After school, Mr. N was ready to finish the recipe. We preheated the broiler, basted the chicken and prepared the rice (a pre-made Mexican rice mix since we all had to head out different directions  after dinner).

The chicken itself was easy to cook in the broiler, but we think it would likely be better on the grill – which we’re not braving in these frigid temps. After broiling we spritzed some  key lime juice over the chicken and it was ready to go.

So the meal itself came with more mixed reviews than last week. The rice was a hit with Mr. N and was good mixed with the marinade and chicken for mom and dad. The chicken itself Mom, Dad and Mr. N all agreed was about 3 spoons. We all liked it, but thought that it’s likely not to end up in the regular rotation simply due to the amount of prep it takes. It may appear again over the summer though when we can try it on the grill and serve it up with some margaritas for mom and dad – have to put those fancy margarita cups we got for our wedding to use someday! As for Ms. A we’re going to say zero spoons for her. She took one taste and refused to eat any of her dinner and instead filled up on a LARGE bag of apple slices later in the evening.

And now our Mexican adventure is a wrap. Next week it’s my turn to pick. I’m thinking of moving us on to a new continent, although I’m not sure where just yet. Maybe with the winter weather some good comfort food is in order. Cheers!

One thought on “Kicking it up with Key Limes”