We were at the farmer’s market a few weeks ago and got some wonderfully ripe peaches and black figs. I had never seen figs at our farmer’s market before, so I snatched them right up. Believe it or not, those little gems are hard to come by. In fact, one time, Miss A and I hit five, yes five, different grocery stores to try to find them. It was an epic journey that included a down pour, stopped freight trains and a grumpy woman that literally blocked us from the figs with her cart and took every last one of the pints (and there were at least 10!). Now it’s become a running joke that we need to grab the figs before “figgy lady” finds them. (Miss A was certain she emptied out the first three stores too!)

So on our way home from the market I started thinking that the figs and peaches might be pretty good together. Then I remembered that I had clipped a bit of my mom’s sage the day before…my wheels were spinning. A quick internet search and I saw a recipe for seared figs and peaches with balsamic vinegar. Then it hit me – French toast! 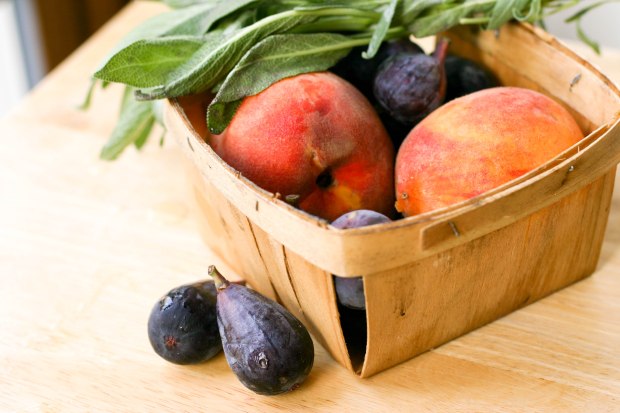 So here is our next installment of French Toast Madness and our search for a champion – Peach & Fig French Toast. We started with a pretty standard French toast batter – eggs, milk and vanilla. We also tossed in some freshly grated nutmeg just for fun. 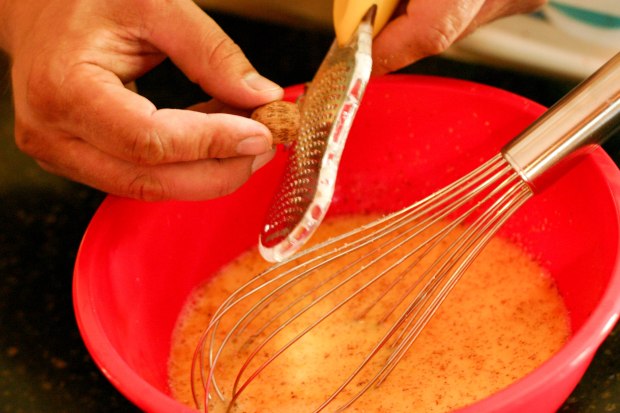 Mr. N was our whisker, while Miss A looked on. Now I don’t remember what these two were talking about while cooking, but the pictures were just too animated not to share. These are three of about 15 pictures that were all taken within about a minute. 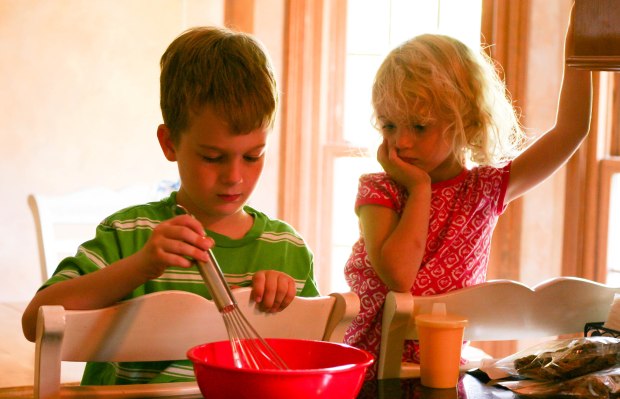 Who knew whisking could be so much fun! The whole mess of shots I took during that conversation is priceless. I just wish I could remember what they were so animated about! Anyway, after the batter was whisked, Miss A took over for bread dipping. She’s become quite good at soaking both sides very thoroughly.

Next we heated up the griddle pan and fried up some cinnamon bacon. This was a first for us. I’d never seen cinnamon bacon before; and yes, it’s as good as it sounds.

Then it was time to cook the figs and peaches with the sage. 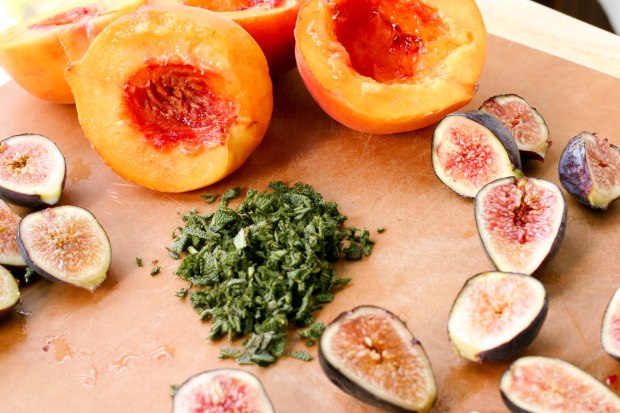 Finally we tossed our batter-soaked bread onto the griddle pan and fried that up right in the bacon grease. (As you’ve probably noticed this isn’t a diet friendly French toast.) We then served the French toast with the figs, peaches and bacon. 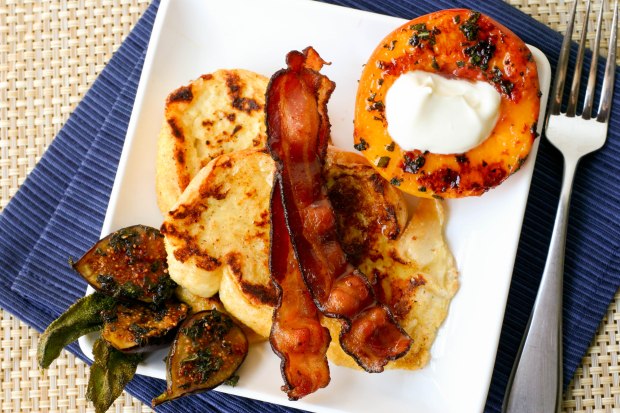 We scooped some creme fraiche into the center of the peach slice; and that clear liquid over the top of the bread and bacon isn’t grease, it’s a drizzle of aged white balsamic (which I could easily eat by the spoonful).

While this definitely wasn’t your typical breakfast-style French toast, it did go over pretty well. Especially with Miss A. She’s usually the toughest critic when it comes to French toast. She tends to eat more of the topping than the toast itself, but not this time. She ate it right up, the peach too! The figs weren’t quite a big seller with her or Mr. N, though they did try them.

Mike and I both enjoyed the French toast, but this one will need some tweaks if it wants to be a champion. I think next time I’ll try maple syrup in place of the balsamic. While the balsamic was delicious, I think the syrup would tie everything together a bit more. I’ll also opt to skip the creme fraiche. It just didn’t bring much to the table.

Criticisms aside, it’s still French toast and you can’t ever really go wrong with French toast. Mike, Mr. N, Miss A and I came in at 3, 3, 4 and 3 spoons respectively, but I’m not sure this one has what it takes to make it deep in the tournament. It’s got some pretty tough competition.

Now before I wish you all a great weekend, remember to vote for our next international cooking destination. The poll closes soon and it’s a VERY tight race! Happy weekend everyone and we’ll see you next week with a sweet and sour stateside adventure.