Actually, we’re quite far from Maine with this cuisine as we’re still cooking recipes from Hong Kong, but this recipe features one of our family favorites – Lobster. Now you might recall we had many adventures this summer in Maine with our live lobsters. We tried boiled lobsters, grilled lobsters, lobster risotto and lobster rolls. Every time, the lobster was a hit. So I had a good feeling going into this recipe for Cantonese Lobster Stir Fry. (Cantonese food is often served in Hong Kong…)

Miss A and I began prep for this recipe while Mike was at broomball and Mr. N was at a birthday party. While I always enjoy when the four of us get to cook together, I have to say I’m really enjoying this one-on-one time with my little girl. As you know, she’s quite entertaining and this particular afternoon was no exception.

When I prepared our first ingredients of lobster, peanut oil and garlic, Miss A was quite fascinated with the lobster tails.

Being that we were only working with tails this time, and not live lobsters, Miss A kept asking if she could hold one. I think this was her way of feeling as brave as her older brother (Gosh he’s grown since then!). 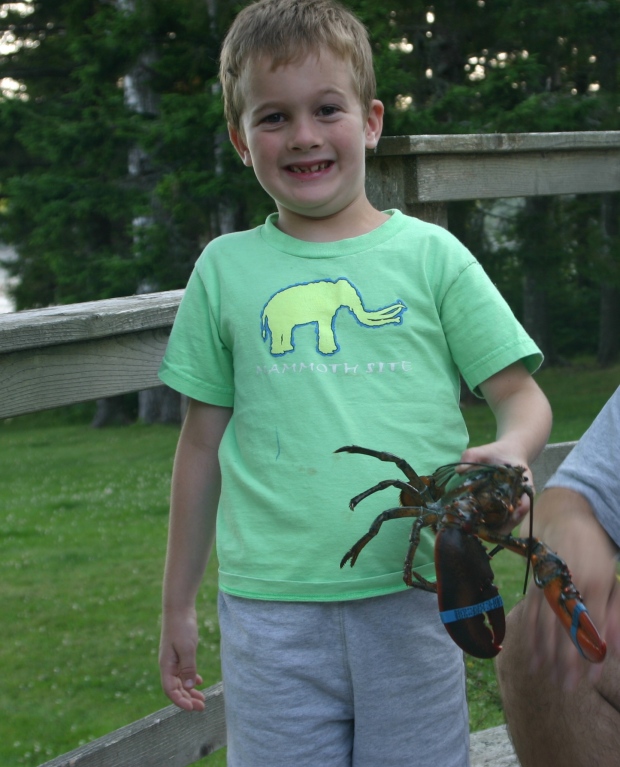 So as Miss A watched with fascination while I chopped the lobster she asked, “Does that hurt the lobster?” I of course said no, it’s not alive anymore, these are just tails. She then said, “So it’s going to come back to life and then you throw it in the pot?” I think we have no thoroughly confused the poor girl after our Maine experience. So we had a little lesson in how things don’t come back to life and these are just tails. She then felt much better about that and asked if she could try some once it was cooked. “I’m hungry.” You have to love how kids move on so quickly. I could stand to learn a thing or two from them at times.

So we then tossed our “dead” lobster tail into the peanut oil to fry for about five minutes.

Next we set the lobster aside and turned to our other ingredients: ground pork and fresh minced ginger.

We used the rest of the peanut oil to fry the ginger and pork until it was cooked through. 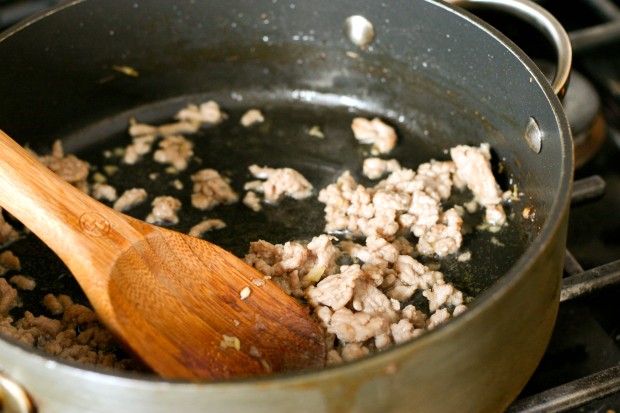 Then it was time for the sauce ingredients including chicken stock, Port, soy sauce, brown sugar and corn starch.

We mixed the Port, soy sauce, brown sugar and corn starch together and then added it along with the chicken stock to the skillet. 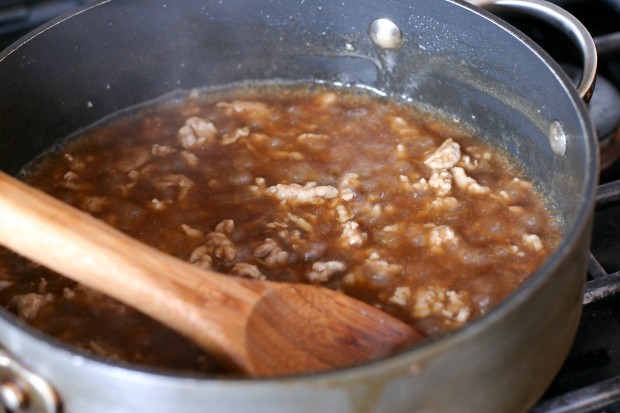 Next we chopped some green onions and beat together two eggs.

Both were tossed into the skillet and cooked over low heat for a few minutes.

Once the sauce was thickened, we added the lobster back to the skillet and cooked the stir fry for its final few minutes. 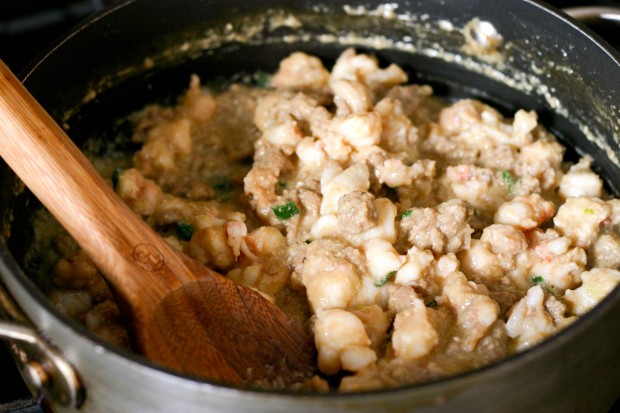 Then we served our Cantonese lobster alongside some rice with a garnish of green onions. By now Mr. N had returned home and walked into the house saying, “Something smells really good!” So we were already off to a good start. 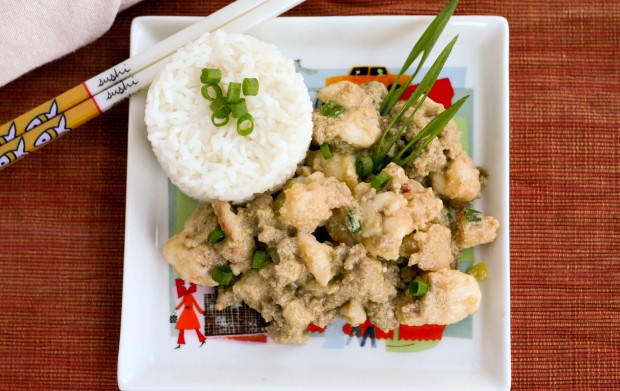 Mike also came home and thought dinner smelled great; now that made four people all very excited to sit down to eat dinner – and without any complaints or “What’s that?!” And dinner didn’t disappoint. 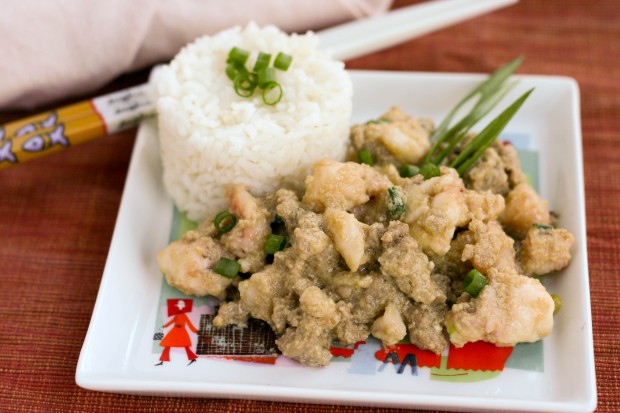 Mr. N was in heaven – he does love his Asian food. He came in with the highest ranking of 4 spoons. Miss A initially spent most of her time eating yogurt, but then turned to her lobster and ate every last bite. So that’s another 4 spoon vote. 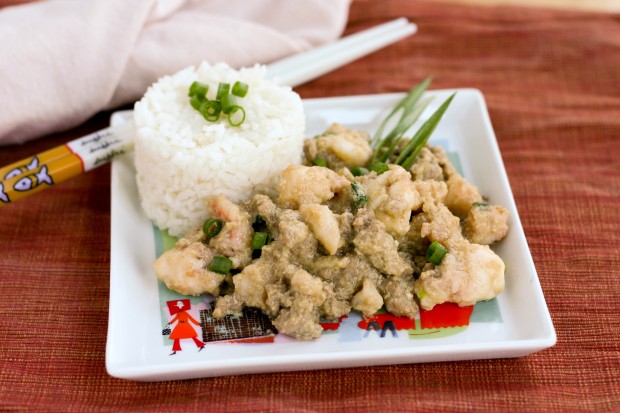 Mike and I also both enjoyed the lobster stir fry, but thought we could do without the rice. The lobster and pork really stood out on their own. So we came in with 3 spoons each. The only thing keeping us from a 4 spoon ranking is that we prefer to enjoy our lobster in all its lobster glory – dripping with clarified butter. 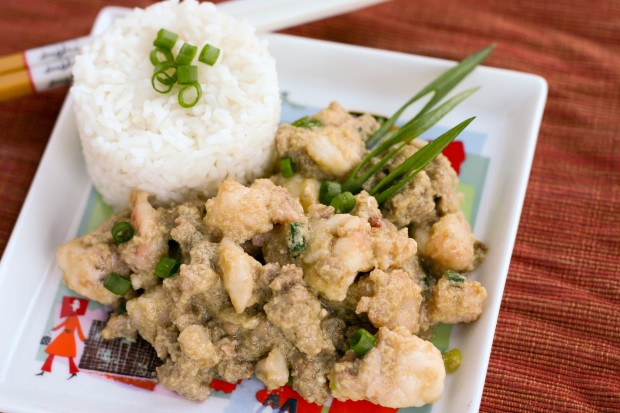 Then again, any meal that makes all four of us excited to sit down and rings in that high with our toughest critics…well, that carries some weight.

30 thoughts on “Toto We’re Not in Maine Anymore”