We’ve already talked about how inexpensive the live lobsters in Down East Maine were, especially when compared to prices in the Midwest. So it shouldn’t come as a surprise that we made yet another lobster dish on our summer vacation; and since this weekend was the unofficial end of summer, we’re taking another look back at our delicious memories.

Toward the end of our week in Maine we wanted to fix up something a little more elegant for the grown-ups. While the kids really enjoyed all the lobster, they wanted a break. I guess it was too much of a good thing for them, not however for Mike and I who would never tire of lobster. So while the kids dined on some pizza, Mike and I worked on our Lobster Risotto.

I’ve got to give credit where credit is due – this meal was, for the most part, courtesy of my dear hubby. He’s our resident risotto chef. It’s one of his favorite things to make and I’m happy to sit back and enjoy the fruits of his labor. I did, however help with the lobster preparation this particular evening. Until now, Mr. N and Mike had boiled our lobsters, but I was finally ready to give one a shot. I have to say – I understand why Mr. N threw his first one in the pot. While I didn’t throw it, I sure was tempted. It’s a bit intimidating. 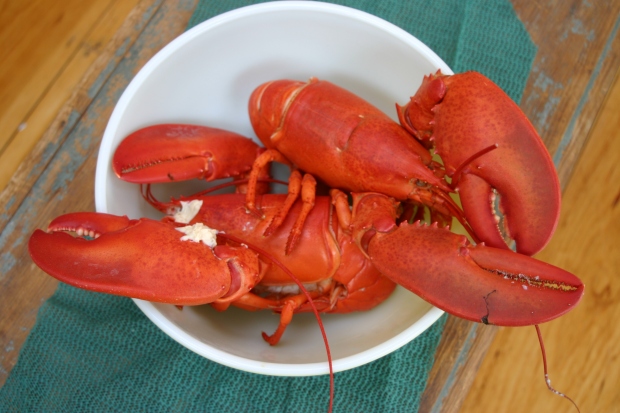 Once the lobsters boiled, we removed the tail and claw meat.

We left the claw meat whole and chopped up the tail meat. We set both to the side, keeping them warm, while we attacked the risotto. We started with some diced shallots and leeks which we sautéed in oil over medium-high heat in a stock pot for about three minutes.

We added the lobster tail pieces to the risotto, at the halfway point, or after about 10 minutes of adding and mixing the stock to the risotto. We then finished adding the stock and tossed in some parmesan cheese. After a few more minutes, the risotto was complete. We dished it onto our individual plates, and added a little truffle salt to taste.

To complete the dish, we garnished the risotto with the claw meat and served.

I think it probably goes without saying, but this got 4 spoons from Mike and I. He did a wonderful job with the risotto – it was cooked to perfection. It was a great “date” meal, even if it was eaten while mediating arguments over who had what monopoly house.

I’m fairly certain Miss A was sneaking houses from Mr. N’s various towns and villages and hiding them around the cabin; although we never caught her in the act. Every date night needs some entertainment right?! Actually, this is the stuff that makes for good memories…

30 thoughts on “Another Maine Course”