Tonight we bring you our main course dishes from Sunday’s Chopped Challenge. The basket for this round came to us from Sally at Bewitching Kitchen and included lobster tails, edamame, buckwheat noodles and chipotle peppers. We were a bit intimidated because if you’ve been to Sally’s blog, you know she’s always coming up with inventive dishes that look deliciously full of flavor – without fail – and we wanted to make sure we did her proud.

We were also a bit nervous and baffled about how to combine edamame and buckwheat noodles with chipotle peppers. This one was definitely throwing us. Do we go Asian or Southwestern? Ultimately we went both directions. I went towards Asian flavors and Mike embraced the Southwest. And while our dishes may not look as restaurant-worthy as the last round, these were hands down our favorite dishes of the day. Mr. N and Miss A were also very excited about the lobster. You should have heard Miss A, “Is it ready yet? Is this the lobster? Is it dead? Can I eat the lobster?” Apparently we taught them well in Maine this summer.

We started by first preparing the edamame and buckwheat noodles (or soba) according to the package directions.

We were only able to find dried chipotle peppers, so we ground them up to make a powder. 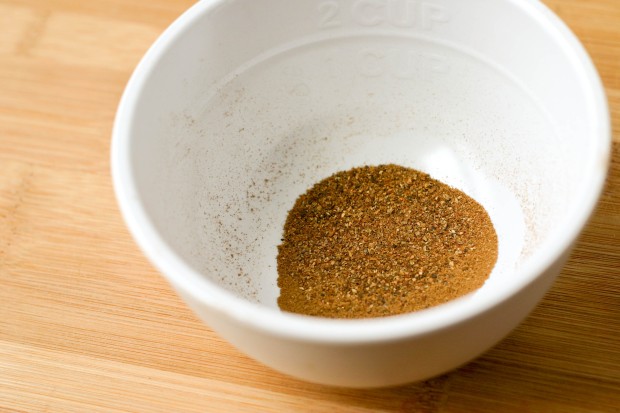 From there we went our separate ways. Don’t worry, I won’t bust out into a Journey song again. I started by preparing my coconut curry sauce by combining coconut milk, curry powder, ginger powder and some of the ground chipotle powder in a sauce pan and bringing it to a boil. I then let it simmer for about 10 minutes before adding cilantro and my cooked and peeled edamame.

Mike in the meantime prepared a chipotle rub from ground up chipotle powder, cumin and garlic powder. He then boiled the powder in salt and water along with the larger leftover pieces of dried chipotle pepper. Once boiling, he brought the sauce down to a simmer and reduced it by three-quarters.

Now onto the lobsters! I cut a part of the shell away from mine and basted it with melted butter mixed with lime juice, cilantro, a bit of chipotle powder and salt. I then broiled them for about six minutes.

As for the buckwheat noodles, I tossed mine with soy sauce and sesame oil.

Mike tossed his buckwheat noodles into the wok with shallots, roasted red peppers, garlic, ginger powder, edamame and ponzu sauce. (Okay – so maybe it’s more fusion than Southwest.) And we were then ready for the challenge. As you may well know, Mike won this round. All four of us were judges and ranked each dish based on taste, presentation and creativity. While Mike and I both scored the maximum amount of points for taste and creativity, he won for presentation. I think he may have been trying to bribe the smaller judges with his monster diablo face creation. 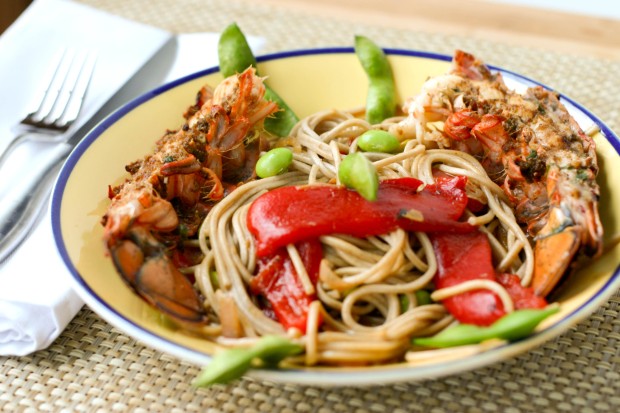 It worked. The kids were thrilled and Mike scored major points on presentation. The kids then also ended up docking me points. Ah well. What can you do. It was creative, that’s for sure. All that aside, Mike’s dish tasted great! It really took advantage of the smoky chipotle flavor which was complemented by the slight sweetness of the roasted red peppers.

Mike and I both gave this dish 4 spoons. The lobster was cooked to perfection. It was definitely the highlight of the dish. I never would have thought to use a chipotle rub on lobster, but it’s fantastic. Mr. N also gave Mike’s dish high marks coming in with 3 spoons. Miss A, however, didn’t enjoy the smoky chipotle flavors and gave it 1 spoon. Not to worry though, Mr. N was happy to take her portion of lobster. So there it is, your winning recipe, Chipotle Grilled Lobster over Stir Fried Buckwheat Noodles.

As for my Chopped dish, well, it received equally high marks for taste and creativity. Mike even thought my flavors worked in more of a harmony than his did. While I agreed I had some pretty awesome flavors going on, I don’t know that they worked any better than his. Truly this round was a dead heat when it came to taste. The dishes were very different, and oh so good!

I served my buckwheat noodles alongside the lime broiled lobster, topped the noodles with the coconut edamame sauce and garnished it with some freshly sliced mango. It was a sweeter dish than Mike’s, but the cilantro brought a bit of contrast and fun to the party. Miss A was definitely happy, she slurped up her noodles, wolfed up her lobster and left not a drop of mango on her plate. I even saw her pop a few edamames, an unusual occurrence. Mr. N, however, was all about dad in this round. The monster won him over and he wasn’t about to break ranks. 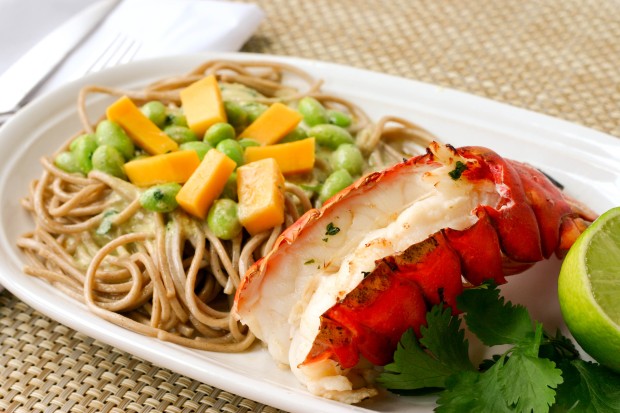 Despite the fact that my dish was chopped, it still received some pretty good spoon rankings. Mike and I both gave the Coconut Curry Soba with Cilantro and Lime Broiled Lobster 4 spoons. Miss A also gave it a 4 spoon vote. Mr. N was the lone dissenter at 1 spoon (Despite the fact he ate all the lobster!). So there you have it – two 4 spoon dishes from one crazy basket. Thank you Sally for the challenge. We now have two new lobster dishes to add to our repertoire.

If you’d like to print the recipes here you go…again the measurements are all approximate as we mostly went on gut feel.

Mike’s Winner (even if by bribery – okay, okay he won because his lobster rocked): Chiptole Grilled Lobster over Stir Fried Buckwheat Noodles