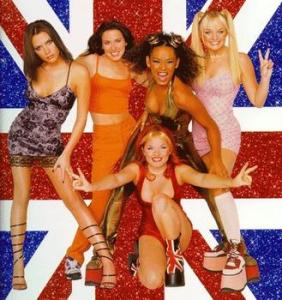 The literal translation of Okonomiyaki, a Japanese savory pancake is, “what you want” for Okono, and “grilled” or “cooked” for yaki. I wanted to title the post with a play on the Spice Girls song, but Mike’s not a fan. I don’t think I was ever a fan, but I have to admit I know all the words to that song – rightly or wrongly.

As we mentioned last week, the prize winner of Miss A’s giveaway was A_Boleyn with her selection of Japan.  Last week we made a variation of one of A_Boleyn’s recipes for a tonkatsu and donburi. This week, we’re taking a suggestion from Charles over at Five Euro Food. While he wasn’t the winner, he too suggested Japan and offered up his recipe forOkonomiyaki. Thank you Charles! I know many of you know Charles, but for those of you that don’t – make sure to check out his site. His humor, common sense/down-to-earthness (if that’s a word) and clever recipes make him one of my favorites.

We also mentioned last week that outside of sushi, we’d never eaten Japanese cuisine. So when we saw that the Okonomiyaki was a cabbage-based pancake, we weren’t sure what to expect. I have to admit, not being a fan of cabbage, I wasn’t hopeful. We started by slicing a quarter of a red cabbage and one whole onion horizontally and finely.

Next, Mr. N whipped up our batter, a mixture of flour, water and an egg.

We added the cabbage and onion to the batter and tossed it to coat. We then used about 3 or 4 tablespoons of Canola oil to coat the bottom of a large skillet. Once that was heated over medium-high heat, we poured in the cabbage batter and pressed it down to form a circle.

We let the cake cook for five minutes over medium-high heat. In the meantime we put about a half pound of shrimp into the food processor.

Miss A chopped it up for us. I think she might be getting a little too comfortable with this appliance. 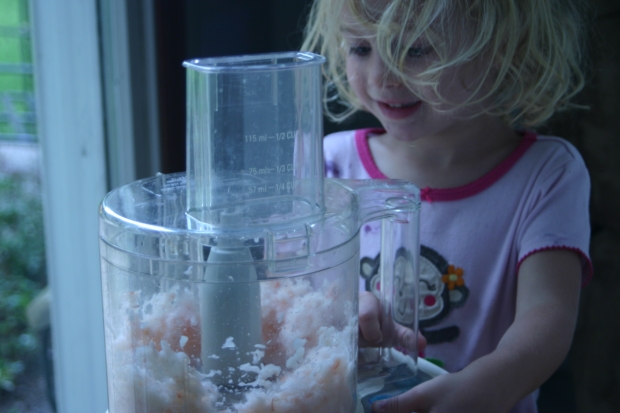 Once chopped we mixed about 3 teaspoons of sambal in the shrimp, a chili paste would work well too.

We added the shrimp to the top of the cabbage cake just before flipping it.

To flip we used a large spatula and carefully got it under the center of the cabbage cake and quickly flipped it, so that the shrimp side was face down. 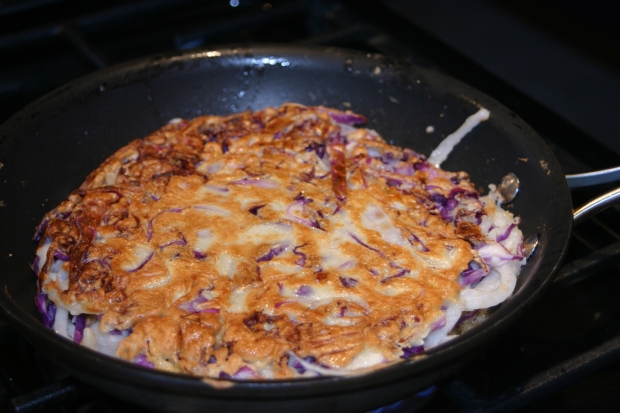 Once flipped we cooked it for another five minutes. In the meantime we prepared the Okonomiyaki sauce. They do sell Okonomiyaki sauce, but since we couldn’t find any, we opted to make our own. We followed a recipe from The Big Oven and combined ketchup, Worcestershire, Dijon mustard, sake, soy sauce, brown sugar, mirin, ginger powder and honey. We cooked the ingredients in a sauce pan over medium-low heat for about a minute and set aside to cool. We also made a spicy mayo using mayo and sriracha (or as Miss A likes to say Sri-Chacha!). 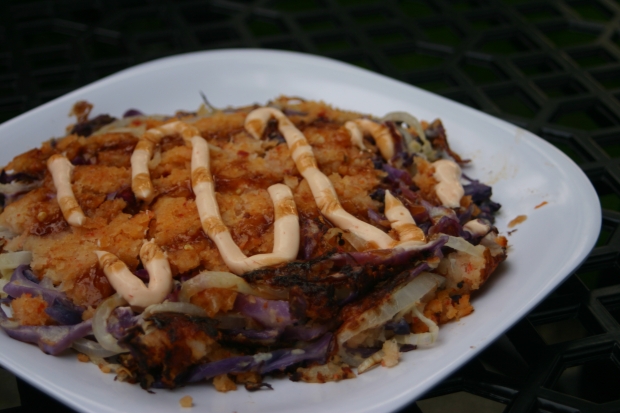 As for our reaction…I was totally shocked. I liked it. I liked it enough to go back for two extra slices. (We cut it like a pie.) Mike really enjoyed it too. We gave it a solid 3 spoons. It was much different than we expected. I didn’t taste the cabbage at all and the texture of the spicy shrimp was a nice complement to the cabbage cake. As for the kids, Mr. N didn’t say he loved it, but he didn’t hate it. He ate his slice and said it wasn’t bad. So 2 spoons for him. Miss A, well, she never got to her slice. She spent all of her time eating her miso soup. 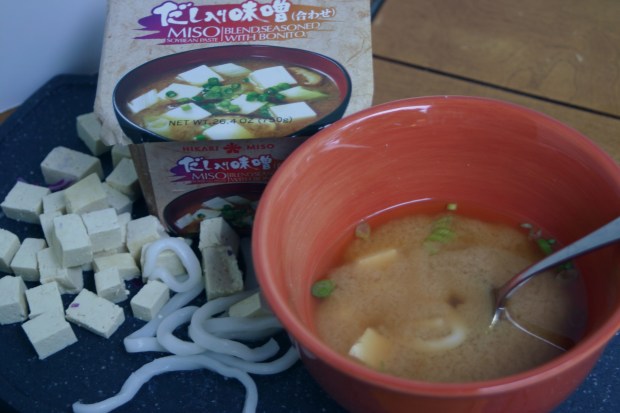 For our miso soup we used a ready-made miso paste and added it to hot water. For our sinkers we added udon noodles and tofu, and for our things that float we used slices of green onion. Miss A loved it. She ate every last bite from her bowl and even went back for more noodles and tofu. 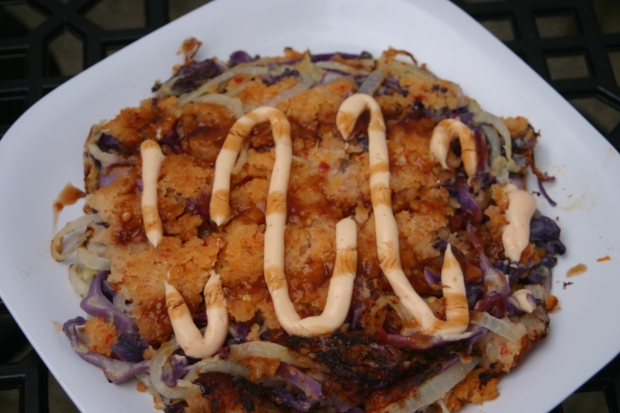 The rest of us thought the miso soup was just fine. It would have been better with seaweed, but we couldn’t find any. We didn’t mind though as we were too busy devouring the Okonomiyaki. Despite not being a fan of cabbage, I enjoyed this a lot and was very surprised by the results. And I’ll definitely take this over a blini any day, even if the kids wouldn’t! And for another variation of Okonomiyaki, check out Charles’ version with a spicy ground beef.

So tell me what you want, what you really, really want…Sorry, now it’s stuck in my head. But if you want to print the recipe, here you go: Okonmiyaki

45 thoughts on “What You Want”