Enough said right?! What can possibly be better than cheesy, garlicky, buttery goodness? Well probably lots of things, but still…When we asked Mr. N what he wanted to go with his fried chicken, he didn’t have any good ideas. Then dad suggested biscuits – a good southern side dish. Mr. N considered this for a while and then said, “I know! I want Red Lobster’s biscuits! Mommy can you make me Red Lobster biscuits?” How could I refuse, even if I had no idea how to replicate those tasty little evil biscuits (I say evil because I could sit there and eat them all night long).

After a bit of glancing around for ideas on-line it seemed that the majority of copy-cat recipes included the same things – bisquick, garlic seasoning, cheddar cheese, dried parsley and butter. But I thought we could do one better…homemade biscuits with garlic, cheddar, fresh parsley and butter. For our biscuit recipe, we used one from Manna & Quail that I had made a while back with rave reviews from dad and the kids. Then we added the Red Lobster twist.

We started by combining the dry ingredients for the biscuit dough – flour, baking powder, sugar, salt, garlic salt and shortening. 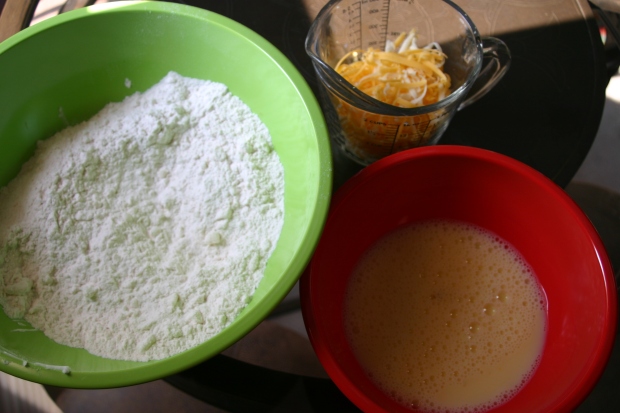 We then whisked together the egg and milk and shredded a cup’s worth of white and yellow cheddar cheese. We added the cheese and the milk/egg combo to the dry ingredients and mixed gently with a fork.

Once the dough follows the fork it’s ready to turn out onto a floured surface and knead.

The dough only needs to be kneaded about 6-8 times. Don’t over do it. Next we flattened the dough until it was about 3/4″ thick.

Then we cut out 12 biscuits using a juice glass. Obviously a biscuit cutter would work too, but I’ve got other things on my kitchen wish list before I get to those. Next we placed them on an ungreased baking sheet and prepared the melted butter, garlic salt and fresh parsley for basting.

We made sure to really lather on the butter.

Finally it was time for baking. We baked the biscuits for 12 minutes at 450F and served them with our buttermilk fried chicken. 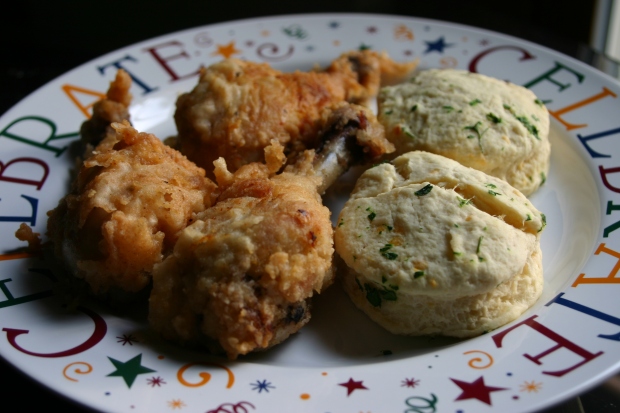 Our cheddar garlic biscuits were a huge hit. Mr. N raved about them exclaiming, “You did it mommy! These taste like Red Lobster’s!” I think he ate four biscuits and gave them 4 spoons. Miss A enjoyed hers, but  not as much as Mr. N. She still gave them 3 spoons though.

Dad and I also thought these biscuits were delicious and 4 spoon-worthy. I don’t think they were quite like Red Lobster’s – a bit less salty perhaps – but they were definitely close, and definitely good!

Most importantly, however, they made my little boy happy! So as we wrap up Mr. N’s birthday meal here’s a little then and now. Happy birthday Mr. N – my beautiful baby boy!