We started by mashing the bananas – Miss A was on hand to help in what has become her new favorite outfit (a princess nightgown), worn both day and night. 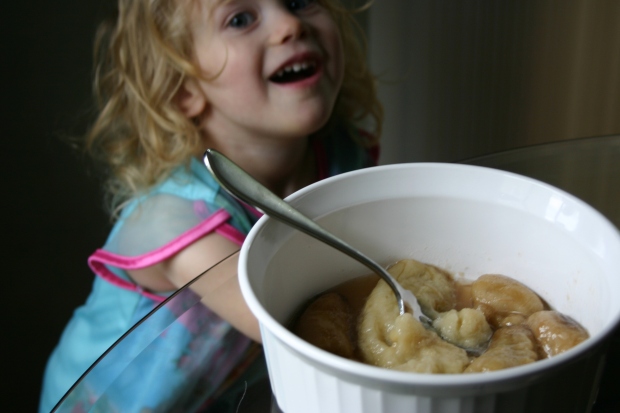 She did a great job, but didn’t understand why she couldn’t use her hands to mash them up.

The bananas were then added to a large mixing bowl with the sugar and remaining wet ingredients.

Once we creamed the wet ingredients we combined the flour, salt and baking powder in another smaller bowl. We then incorporated it into the batter half at a time and mixed until creamy. 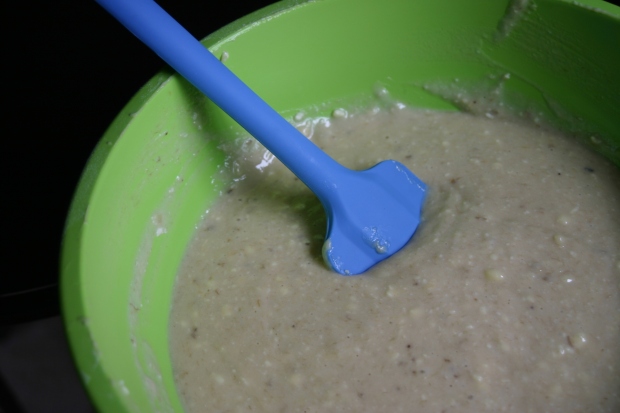 Next we poured the batter into a greased loaf pan and baked it for an hour and fifteen minutes at 350F. After removing the banana bread from the oven, we turned it out on a serving dish.

Mr. N did us the honor of slicing the bread.

Then we all had some nice warm banana bread. One thing that’s mandatory when making banana bread – make sure to get a warm slice. Yum!

Tonight’s recipe is probably the best on our quest so far, though we can’t say for sure until we test them all together. Mr. N, Miss A and I all give this one 4 spoons. Mr. N especially liked the crust, and I was really surprised by the results. I have to say I was leery of not using oil and brown sugar. As for dad he liked it, but says it still doesn’t stand-up to his favorite so he’s going with 3 spoons.

Really we’ve yet to have a bad banana bread, or even just an okay one; so far it’s been a very tasty quest and we can’t wait to try the others in our stack!

28 thoughts on “Third Time’s the Charm? Quest for the Best Banana Bread.”