Tonight we enjoyed a bonus meal from Miss A’s cooking destination, Russia. Typically we only spend two weeks on each country, but with the holiday and weekend travels we needed something that we could make up quickly. Actually this meal, the traditional Russian Pelmeni, is anything but a quick recipe. It’s a lengthy process that took all hands on deck. What made it work for us this weekend is that we actually prepared the Siberian dumplings last weekend, froze them and were able to quickly cook them up tonight.

The Russian pelmeni is a meat dumpling similar to potstickers or pierogies. According to RusCuisine.com, the dumplings, popular all over Russia, are believed to have originated in Siberia as many could be made at once and frozen for the long winters. The first step to making the pelmeni is to create the dough from flour, salt, sugar, egg and water. It’s a very tough dough to knead at first, but eventually becomes soft and resilient. Once we were satisfied with the consistency of the dough we chilled it in plastic wrap for 40 minutes before rolling it out on a floured surface. 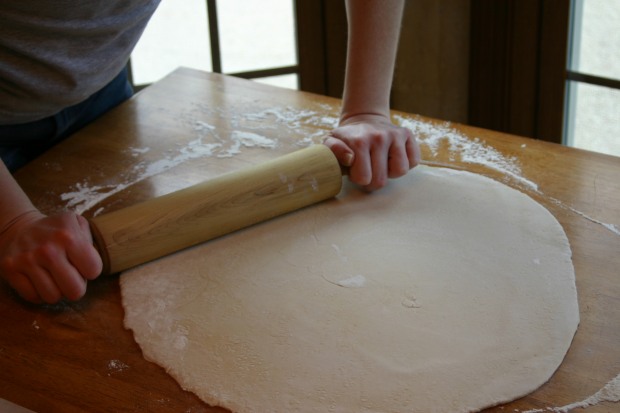 The dough must be rolled out very thin – until it’s almost translucent. Then Mr. N and I began cutting out the small circles.

Miss A took care of separating the circles, making sure they were flat (by pounding on them with her “patty cake” hands), and passing them to Dad. 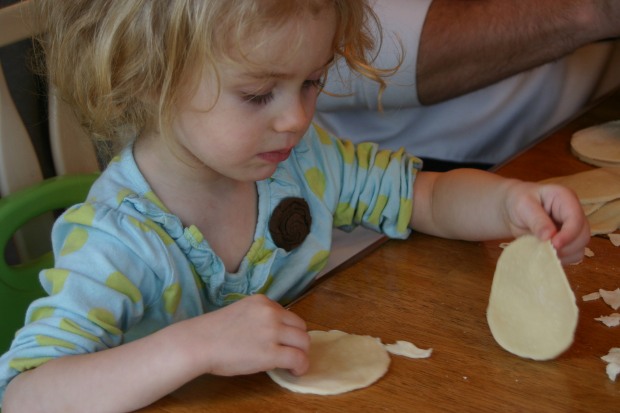 Dad was in charge of the dirty work this time. He placed a teaspoon of our raw meat filling –  a combination of ground pork, ground beef, onion, thyme and rosemary – on the center of each dough circle, and then folded it in half. 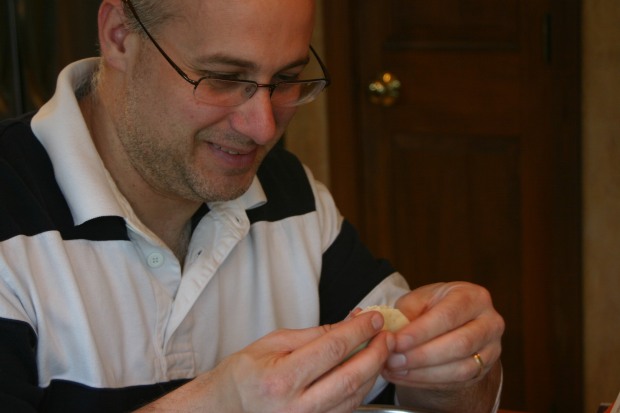 Since this recipe made 60 pelmeni, we all took part in sealing the pelmeni around the edges. It’s an important step to make sure the meat remains in the dumpling during the cooking process; and Mr. N, as you can imagine, takes the task to heart. This time he brought out his tool set to run quality control. 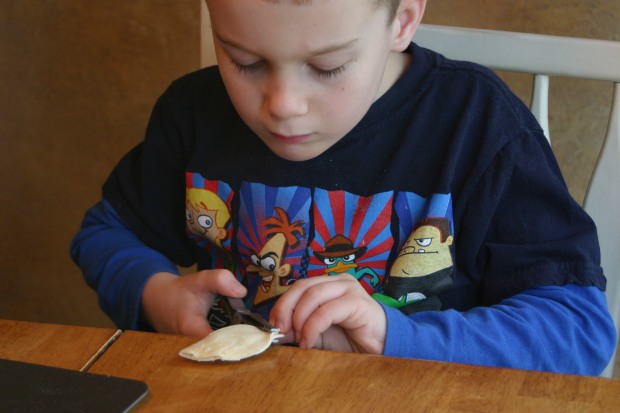 Once the pelmeni are sealed, they can be frozen (like we opted to do last week), or cooked immediately. Frozen or fresh, they are cooked in a pot of boiling water. After the dumplings rise to the top they can be removed and strained. Pelmeni are traditionally served hot with melted butter, lemon juice, vinegar or sour cream.

We served our pelmeni with several different dipping selections: melted garlic butter, sour cream and marinara sauce (not a Russian condiment, but one that suited Miss A) and a Russian beet salad. Dad and I both enjoyed the pelmeni with the garlic butter. Mr. N preferred the sour cream and Miss A enjoyed hers with the marinara. Mr. N and Miss A both gave the Siberian dumplings 3 spoons, while Dad and I gave them 2 spoons.

As for the beet salad…it’s probably very good if you enjoy beets; however none of us have ever been fans. We did give the root vegetable an honest shot but, they still gagged me and Mr. N ate his and shouted, “Zero spoons! Zero spoons!” I think we all concurred.

The pelmeni are a good hearty dumpling and if I could buy them already prepared, I’d consider this meal again; however, I don’t see us making them from scratch anytime soon. But hey, it was a fun way to say farewell to Russia.

Side note: If you have leftover meat filling, they make good burgers. 🙂