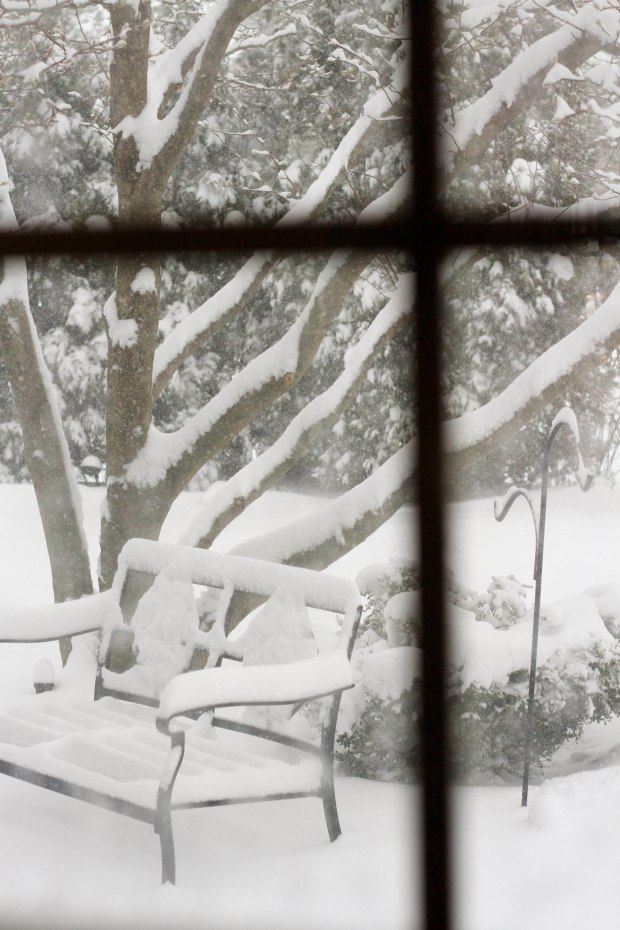 While most of America recognizes today as Super Bowl Sunday, in our house it’s more commonly known as Chopped Challenge Day. As you can see by the pictures, it’s also our first big winter storm of 2015.

Certainly we’re no strangers to this kind of weather and typically when it falls on a weekend, we’ll hunker down and get cozy. Any other Chopped Challenge day and this would be perfect. But this year, we’ve got some extra challenges coming our way.

The match-ups were drawn by number and the girls are once again pitted against the boys. Mike and Mr. N’s team, Team Ninjago is facing the reigning, three-time champion Kristy and her partner for this year, Miss A. The girls’ team, otherwise known as, Team Miyagi is feeling rather confident this year, perhaps too confident?

Meanwhile, Team Ninjago is down a man. Mr. N had a birthday party sleepover (where we’re guessing there was little sleep involved) last night and won’t return until mid-day. Will ChefDad be able to carry his team to victory? Will Mr. N’s sleepless night spell trouble for the boys? 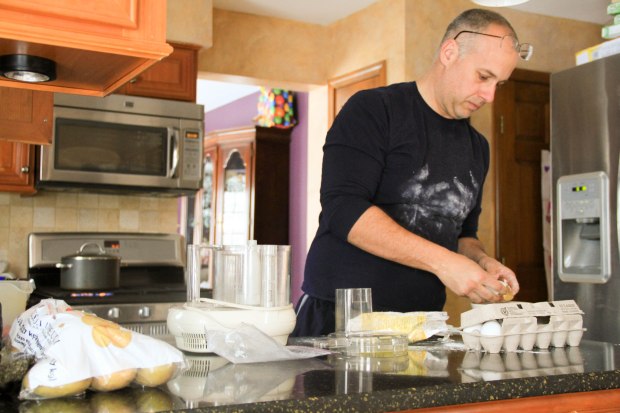 Only time will tell, but Team Miyagi has challenges of its own to face as well. Miss A also has a birthday party to attend today, taking both her and mom out of play for a good 2 to 3 hours! How will the girls manage to overcome that hurdle? Especially when it means shoveling is likely involved. 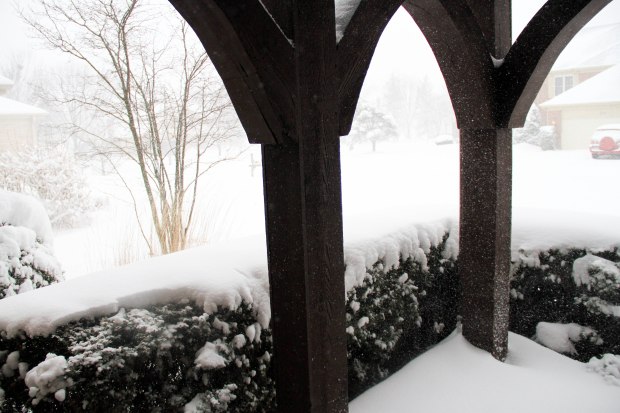 No matter. The show must go on. This is Chopped Challenge Day after all. Will Kristy maintain her Championship title? Will the boys take advantage of their underdog status and lull Team Miyagi into complacency? We’ll find out as Chopped Challenge 2015 officially begins.

Ladies and gentleman the games begin now. The votes are in and despite the creativity of all the baskets, the winners were clear. With a runaway victory, the Appetizer Basket for this year is…. 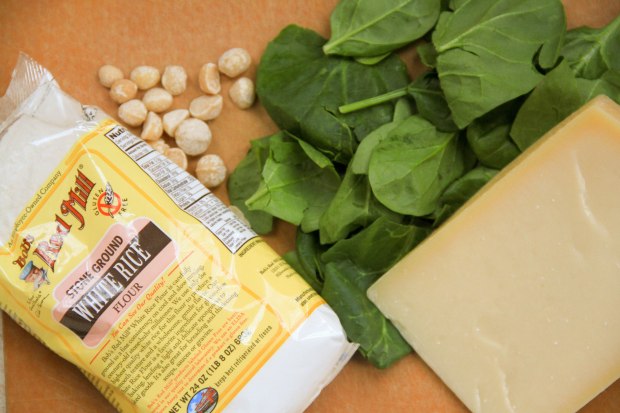 Rice flour, Macadamia Nuts, Parmesan Cheese and Spinach! What will our teams come up with this year? Stay tuned. We’ll be back and adding to this post, live throughout the day. 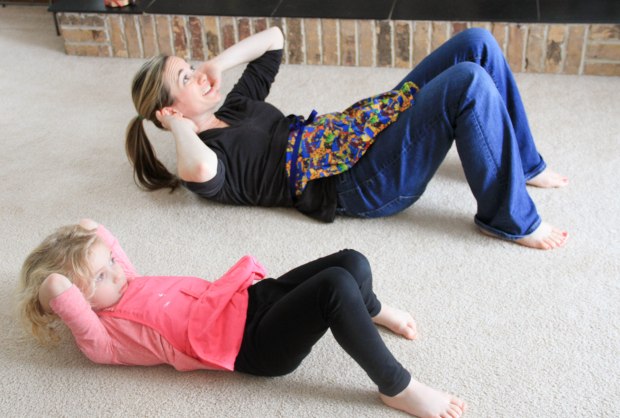 Uh oh boys. Looks like the girls are all business now. Can’t you just see that drive in their eyes! Not to worry, ChefDad appears to have things under control – maybe not the kitchen counters, but certainly the food. Those look like some nice round cuts of dough. Rice flour and spinach perhaps?

After the first set of dishes was washed, the girls entered the cooking arena. But wait, is that berry residue in the food processor? 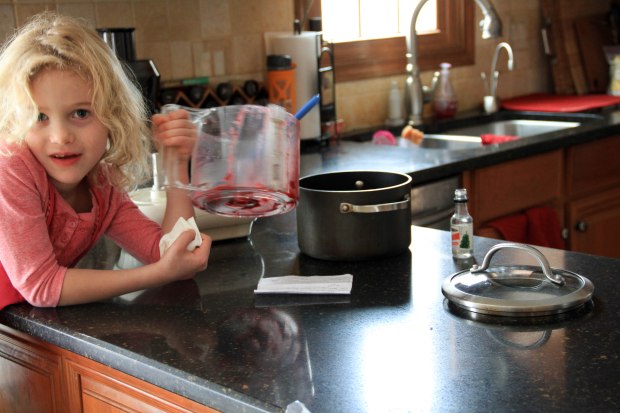 What is Team Miyagi up to? They look like they’re having too much fun, and don’t they know this is the appetizer round? Let’s hope their complacency hasn’t gotten the best of them.

While the girls laugh it up, ChefDad is all business. Potatoes and some kind of ground meat….any guesses what he’s going for yet? Interesting.

Phew! Looks like the girls aren’t only working on the sweet stuff. They’ve got some garlic and oil going in the oven. Hmmm. Things are getting heated up around here!

We’ll check back in with our contestants again soon. Hopefully Mr. N will have returned to the mix by then!

Last we checked, Team Miyagi was putting some garlic into the oven. However, there’s no garlic in sight now. Instead the girls have whipped up some cream. Is this part of their strategy? Dessert first?

Strategy or not, Team Ninjago is working at full capacity now that Mr. N has returned.

Good thing as it appears ChefDad experienced a setback with his dough while away.

We can’t be certain, but we thought we may have heard some sniggering from the other corner of the kitchen. Fortunately, Mr. N seems to have ChefDad back under control.

And while the boys are still working away on the appetizer round. It looks like Team Miyagi has kicked off our main course basket. If we’re not mistaken, they haven’t even started their appetizer basket. This team appears to have just run amok!

So what was the winning main course basket for 2015? Again, another runaway winner…Chili, Kale, Apricots and Cauliflower!

Looks like the girls are well underway with this one.

Could they be taking the chili suggestion literally? Well, one thing is for certain. The Bewitching Kitchen seems to have given the girls a leg up with their cauliflower. It seems like they’ve turned it into cauli-rice.

But wait, where’s Miss A? Miss A there is no sabotaging the other team. Get back to your corner!

Now the girls have some veggies in the mix. Carrots, kale, onion and celery. Could this be going where we think it’s going?

While the girls prepare to head out for a few hours, the boys are still hard at work on the appetizer round. Hopefully they can use this uninterrupted kitchen time to their advantage.

Oh wait! It looks like the girls are too. Is that a slow cooker set to low? 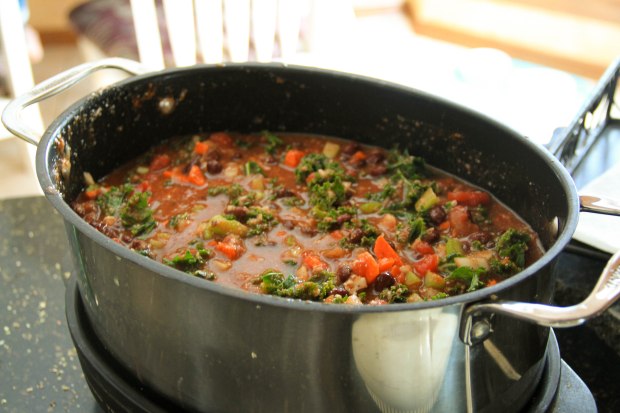 Now that’s clever. They’ll still be cookin’ while they’re out playing! Good strategy ladies. Now let’s see what the boys can do with the kitchen. Surely it won’t look this clean when the girls return.

Well, Team Miyagi is off working on their crane technique or something. Impressive that they ventured off into this blizzard, but it appears that there’s more danger at the birthday party than on the roads. 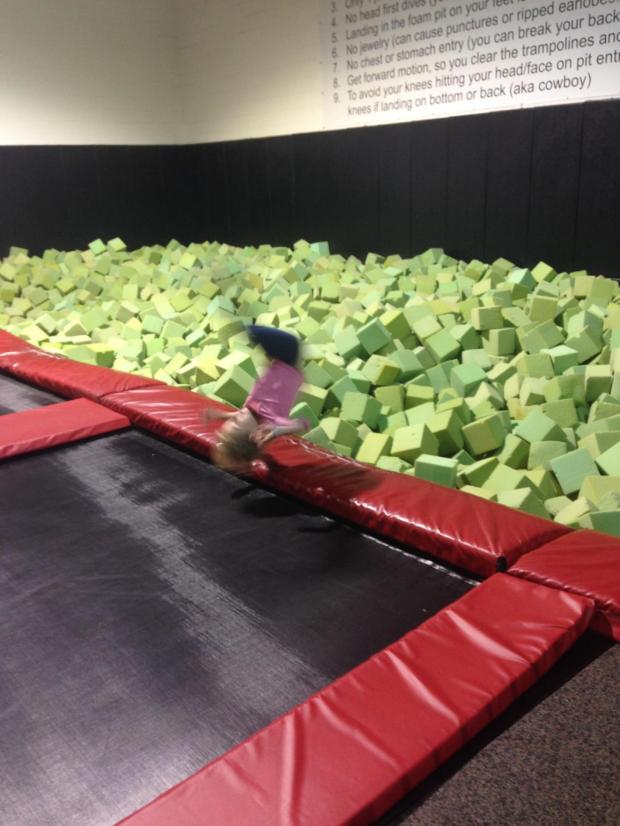 Nice timing on the picture. Hope she made it into the foam pit.

Yup. She’s OK!
Meanwhile, Team Ninjago is changing things up a bit too. They’re done with our appetizer (well, all but the finishing touches), and Team Miyagi hasn’t even started, but somehow the girls are pretty much done with dessert and the main course. They’re hard to explain. Superb Owl Sunday is all about making adjustments, though, and Team Ninjago audibled into their dessert preparation too. Sly move. 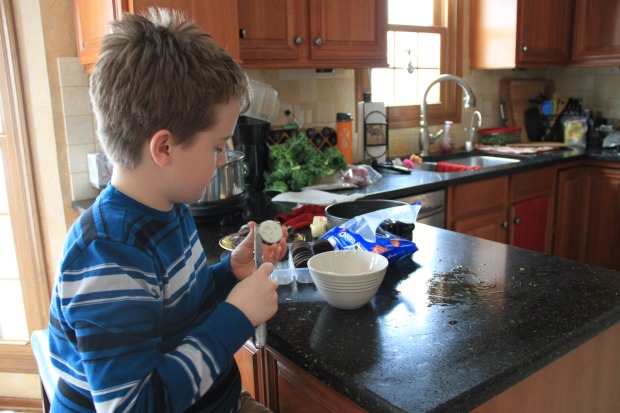 What could Team Ninjago possibly be doing now?

In the meantime, stay safe, Team Miyagi! This picture says it all: “We love you, but you’re going down.”

This is shaping up to be quite the showdown ladies and gents, and it’s looking like a long night for our teams. The three hour delay for Team Miyagi has really thrown off the timing of the event. The boys kept busy while the girls were away – chopping veggies, 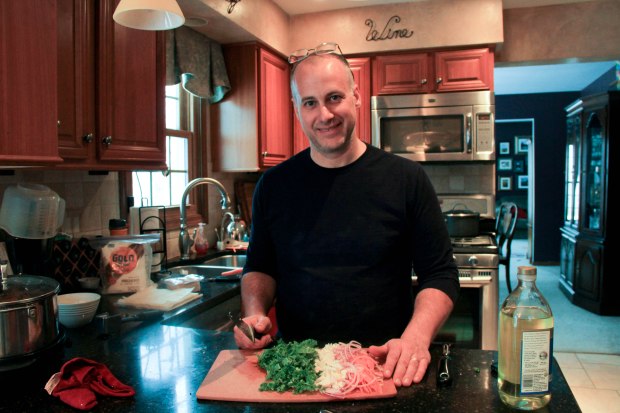 They’re feeling rather confident, and perhaps they should with this dessert prep already underway:

But Team Miyagi didn’t waste any time upon their return. With Miss A a bit jumpy and Kristy’s knuckles a bit whiter after braving the mean, unpaved streets, the girls got right to work.

Looks like they’re putting that roasted garlic to work with a bit of chickpeas and macadamia nuts. In other words, their appetizer is finally underway! (As is this snow storm!)

Within a few minutes of being home, it looks like Team Miyagi already has an appetizer ready to go. Hummus?

But wait, where’s the girls’ spinach, parmesan and rice flour? Oh…here’s the spinach and parmesan. Looks like a fancy hummus with pesto.

Now that’s a clever appetizer; although we don’t yet know what it’s pitted against. Team Ninjago has kept their appetizer hidden since earlier today while they’re hard at work on the main course.

Meanwhile, the girls are finally putting the rice flour to use. It looks like some kind of dough. 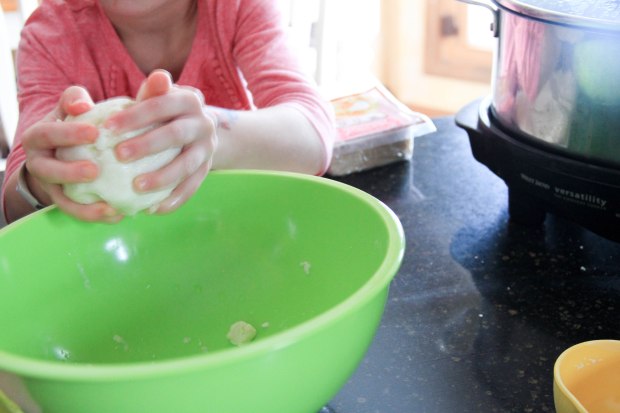 It is and it’s heading to the fry pan! Fry bread maybe?

Whatever it is, it sure looks tasty! What’s up next for our marathoners? Looks like Kristy and ChefDad have busted out the wine. They’re in for a long night for sure!

At least no one has to venture back out in this mess.

We’ll be back soon, but with the fading light the pictures may be less than ideal. On a positive note, we had light past 5 p.m. today! Spring is on the way. Right?!

This just in – We have the Appetizer Round results!

The dishes put forth were: 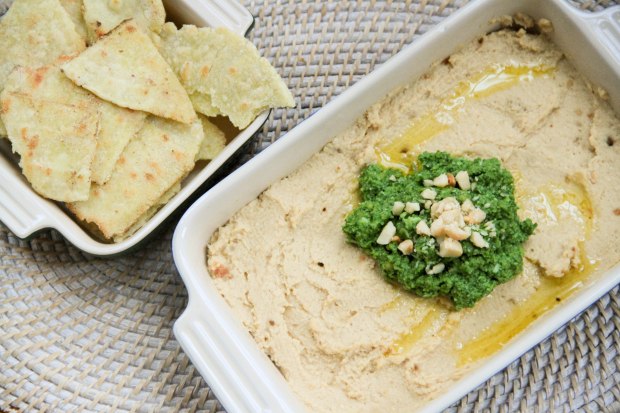 And a hand-made rice flour pierogi filled with potato and bison meat and served with a butter macadamia nut sauce. 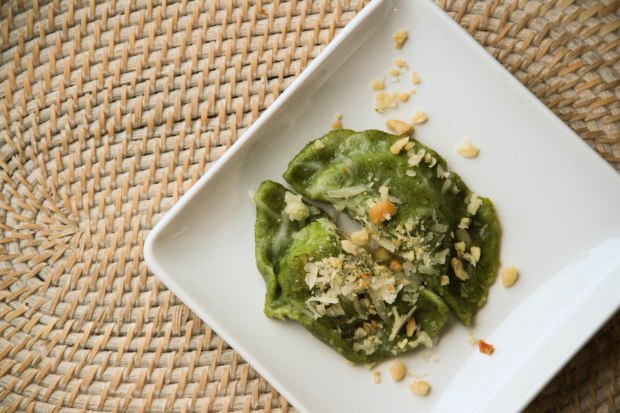 And the winner is….

Team Ninjago with their pierogi!

It was a close one, but it looks like the boys have won the first round. Kristy and Miss A certainly can’t be feeling complacent now. We’ll just have to see how their chili stacks up to the boys Asian rolls.

Main course preparations are underway. Looks like the girls are using their chili to plate some nachos. What a great dish for game day! It smells fantastic too. 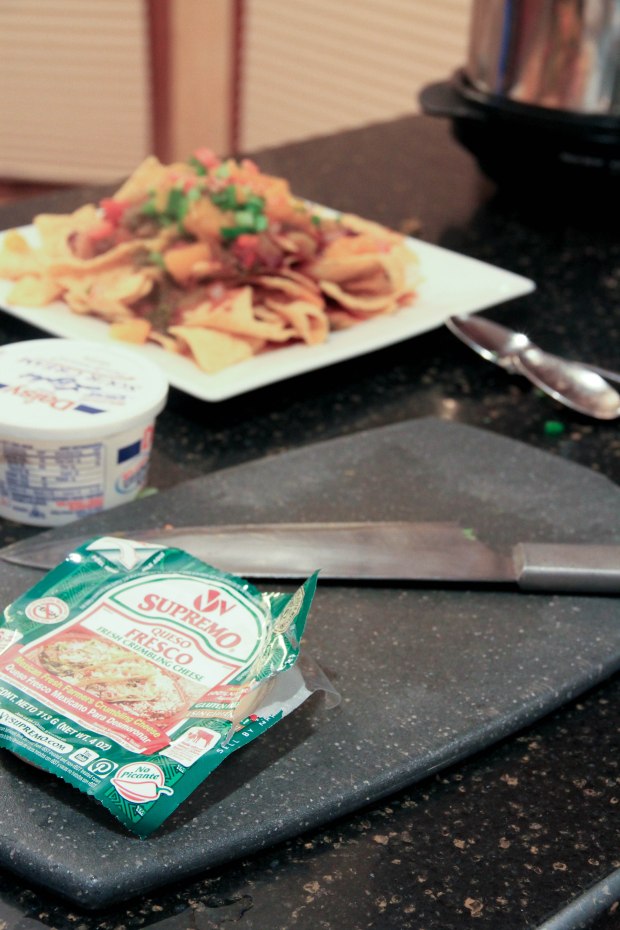 And what is Team Ninjago up to? Looks like they went for some fried veggie spring rolls.

Wait! What’s this? The results are already in? So what did the Main Course Basket turn up this year?

And Team Miyagi whipped up some Chili Nachos. 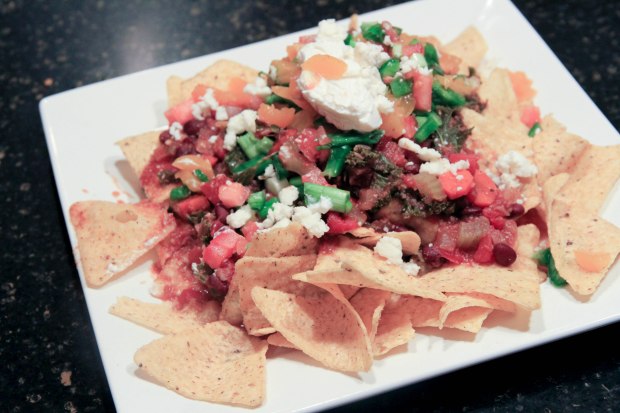 Chili Nachos! Things are certainly interesting now. It’s all up to the dessert round, but first how did the dishes rank with the spoons?

It’s heating up in here for sure. Who’s going to take home the title? It’s anyone’s game. We’ll have to see what dessert has in store for our chefs. The winning Dessert Basket this year (by a long shot) – Oreos, Peppermint Schnapps, Puff Pastry and Cream Cheese.

Stay tuned…we’ll be back with the 2015 Chopped Challenge Champion!!!!

Just over 11 hours later and Chopped Challenge 2015 is winding to an end. The girls’ team busted out the puff pastry and the pie weights to create some little puff cups. 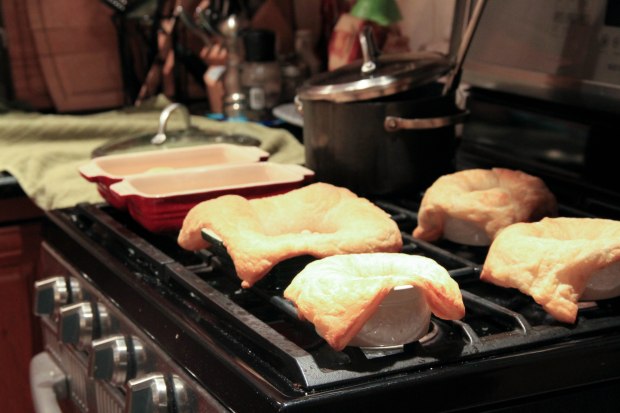 Then Miss A whipped up some fresh whipped cream. What could they be making? And what happened to all those desserts from earlier in the day? 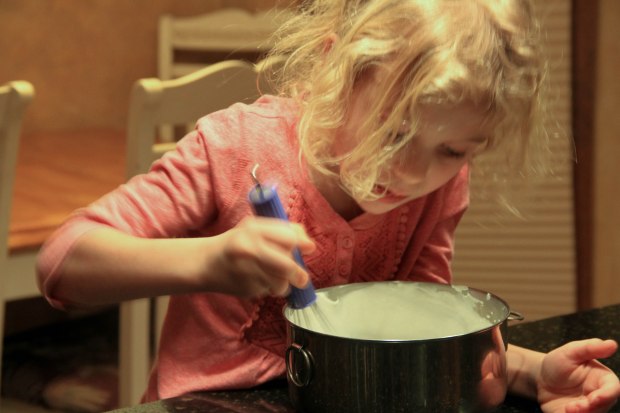 Well folks, we knew this would be a stiff competition, but we had no idea that both Team Ninjago and Team Miyagi would each bring two desserts to the table. Looks like both of these teams want the win.

Team Ninjago brought the Puff Pastry Twists Filled with an Oreo and Cream Cheese Mint Frosting, Dipped in German Chocolate and sprinkled with Sea Salt. And they made an Oreo Crusted Mint Infused Cheesecake! Whew! 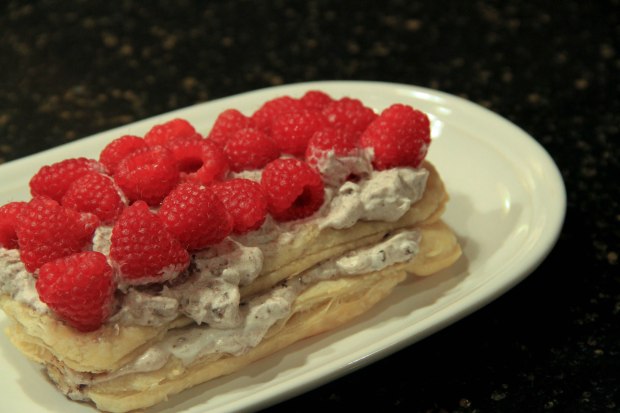 along with a Semifreddo Puff Pastry Sundae.

Now, the moment we’ve all been waiting for. The crowning of the 2015 Chopped Challenge! And the winner is….

So what tipped the scales in the girls favor? It was Miss A’s Semifreddo. She had ice cream on her brain the moment the winning baskets were announced. Good thing she did too, or the results may have swung the other direction. 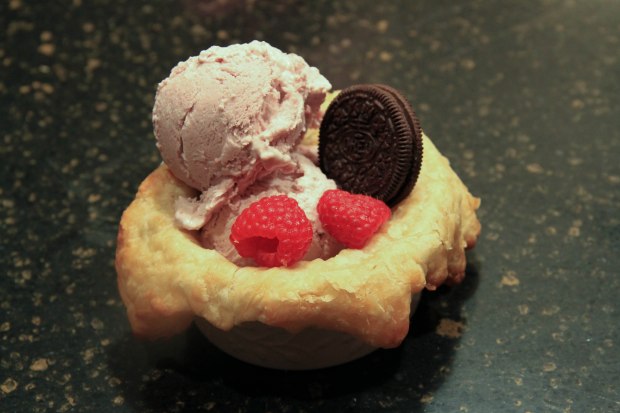 The breakdown was as follows:

The Semifreddo even takes the coveted all 4-spoon rating! Now that’s a first for Chopped Challenge!

Congratulations to Team Miyagi. It was a hard fought battle and another marathon event.

But perhaps we shouldn’t celebrate just yet….There’s still the clean-up (or should I say the 10th clean-up of the day!)!

Thank you all for following along with us today! We had another great year filled with fun, laughter, some good old fashioned trash talking and each other. Thank you for being a part of our memories. Long live Chopped Challenge!

(And looks like the kids get to sleep in tomorrow – snow day! Too bad mom and dad still have to work. Booo!)