It’s officially spring; although you would hardly know it. Let’s not even mention the snow that’s coming our way again tonight. Nope…we won’t mention that. Instead we’ll focus on the one thing spring surely brings – spring break! I’m going to keep tonight’s post short and sweet. We’re planning a short little escape soon – just us and the kids. So while we’re busy getting prepared and shuttling Mr. N to and fro, I’m going to quickly share our last Polish recipe for this little adventure. 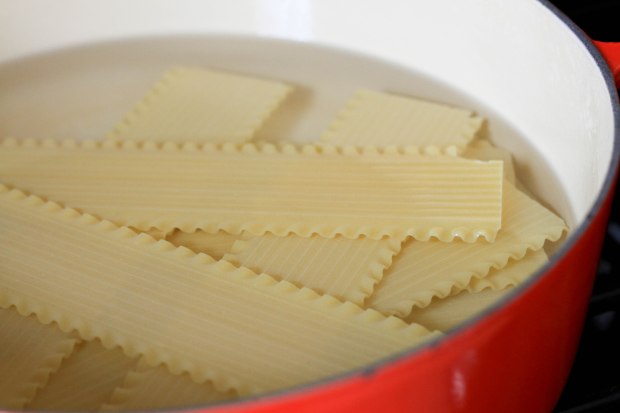 Like last week, we’re focusing on another “lazy” take on the pierogi, the homemade dumplings filled with a variety of ingredients. One of the more traditional pierogi recipes features a dumpling stuffed with potatoes, onions and farmer’s cheese, and that’s what we’ve recreated here only in the form of a casserole. Or as I like to call it, a lazy-agna.

Yes, I realize lasagna in and of itself isn’t exactly lazy, but I consider it easier than hand-making dumplings. Not to mention, it provides ample leftovers which is key for our schedule during Mr. N’s show. (Perhaps many of you have noticed that I’m absolutely drooling over your dishes these past few weeks as home cooked meals are few and far between right now.)

We found this recipe at About.com and one of my favorite tips was soaking the no-bake noodles for 30 minutes in warm water. I’ve used no-bake lasagna noodles before and I would say about 50% of the time they work fabulously. The other half of the time, some of the noodles don’t cook and I end up with a layer of crunchy pasta. Pre-soaking the noodles, however, did the trick. The pasta cooked to perfection.

Just like the prep for a traditional lasagna, the filling is prepared first. Ours included mashed potatoes and caramelized onions. Miss A also mixed the cottage cheese with egg and a bit of onion powder, while I shredded some cheddar cheese.

Mr. N was our potato masher. He found it quite tiring. (Or perhaps it’s his late night rehearsals!)

The rest is all about the layering.

We began with the noodles, added the cottage cheese, followed with the potatoes and then the onions. 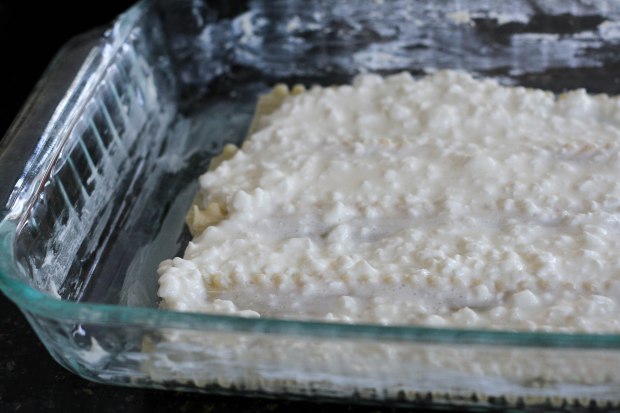 And of course that’s followed with another layer of noodles, cottage cheese, potatoes and onions.

Once we reached our top layer, we tossed the remaining onions with a few breadcrumbs before adding them over top, and finished it off with a handful of cheddar cheese. 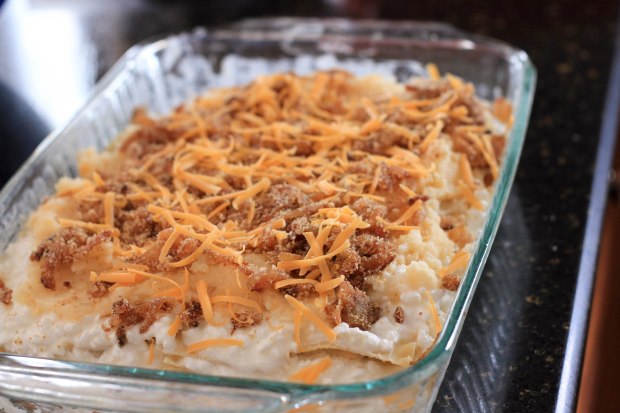 After the 30 minutes was up, we uncovered it and baked a final 10 minutes (or until bubbly). 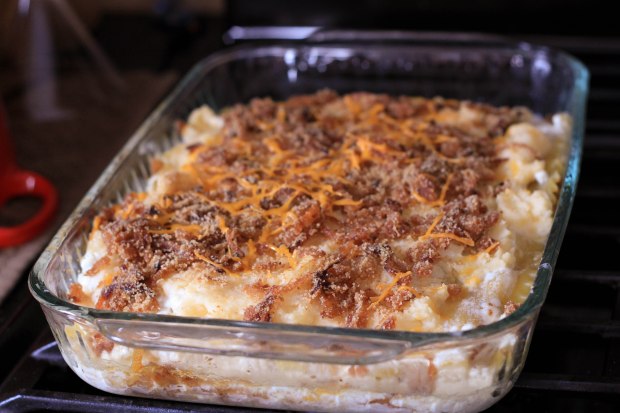 We cut and served our lazy-agna immediately, reserving the leftovers in the fridge for the next week. This could also have been frozen and reheated as well.

The pierogi casserole hit the spot. It was warm, it was filling and it was definitely comfort food. Miss A was in heaven – cottage cheese and mashed potatoes in one dish! It was a 3 spoon dish for her. In fact, this was a 3 spoon dish all around – a solid meal. Mr. N liked it so much, he had seconds and actually enjoyed his leftovers later in the week.

Mike and I loved the sharpness of the cheddar cheese and sweetness of the onions. And needless to say, I liked the fact that we could reheat individual servings for our crazy weeknights.

Given our success with both lazy pierogi options, one of these days, I’ll make the real thing. Until then, either the lazy pierogi or the lazy-agna will due perfectly. 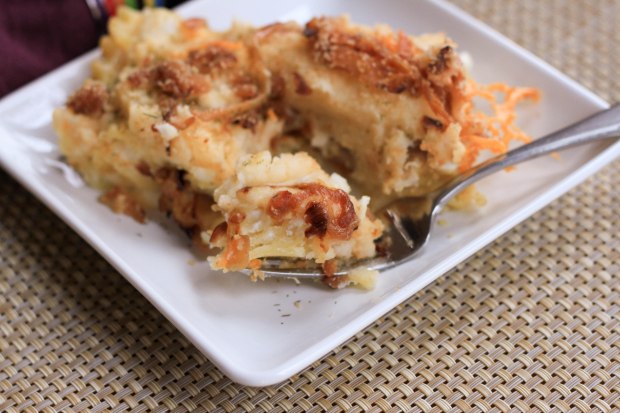 We’ll be back in a few weeks to share our latest adventures, and perhaps even a recipe or two. Until then, I’m going to check out for a bit and fully enjoy this year’s spring break with my growing kiddos. Hopefully by the time we return, winter will have officially gone on its break! Have a great start to April everyone!

34 thoughts on “Springing into Action”