Our Miss A is typically a joy (with the occasional difficult moment or two). Last year her preschool teacher called her a “sprite.” She flits around, happy as can be and is typically always singing, dancing or doing gymnastics. She’s the type of person that you want around when you’re having a bad day because inevitably she’ll lift you up. She exudes warmth and happiness….that is until these last few weeks. The kindergarten blues have officially kicked in – full force.

Now, it’s not what you might think. She loves school. She’s making friends, loving her lessons. She’s even practicing reading and writing almost constantly all of her own volition. So it’s not school per say, but rather the amount of time schooling consumes. She’s gone from having most of her day to play, mornings to sleep-in, and plenty of mom and dad’s attention – particularly when Mr.N was at school – to an entirely different way of life. It’s the school way of life. Mr. N went through it too. It was inevitable. It’s one of the growing-up transitions I like the least.

The difficult part about this transition is age. She’s only five. She can’t quite put into words what she’s feeling all the time – and most of the time it’s hard to recognize. As an adult I can see that her world has drastically changed, not to mention the rigors of sitting in a classroom all day, and the fast pace at which they have to learn. It’s a lot – a big change – even if you love everything about school. So if it’s difficult to find words and understand the magnitude of the change in your life, you can imagine that the result is not pretty. Let’s just say we’re having many more of the “up-turned plate” kind of moments, epic meltdowns and increasing sibling rivalry. The one good thing – she’s our second child, so I know it’s a phase. No need to pull out the “what-am-I-doing-wrong” and “what-happened-to-my-sweet-baby” books this time around. She’ll come back to us….now it’s just our turn to lift her up (and of course provide a bit of boundaries lest we create a monster).

So for our next Indian cooking adventure, some comfort was in order. Until this recipe, I’ve not had much experience with curries and I hadn’t even been to an Indian restaurant (that has since changed!). What I did know, was that curries are considered one of the ultimate comfort foods, making this was a no-brainer. I also wanted a way to tie in some flavors of the season, so for this dish we went with a Pumpkin Lentil Curry. 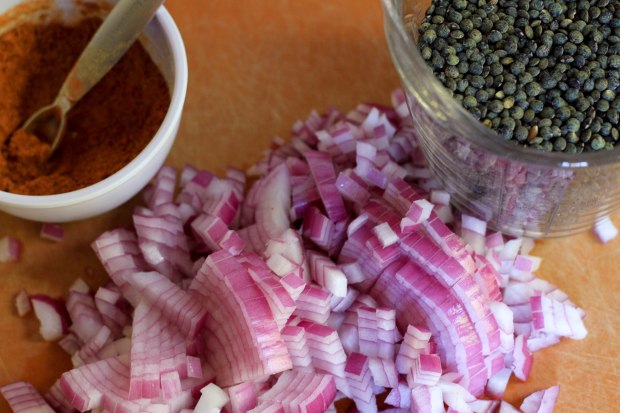 We started by heating the oil, onions, garlic and ginger in a pot along with a bonanza of spices for the curry. For the curry powder we mixed turmeric, cayenne, cumin, coriander, bay leaves, cinnamon, salt and pepper. We let everything cook for about 4 to 5 minutes and splashed a bit of water in the mix to keep it from sticking to the pan. 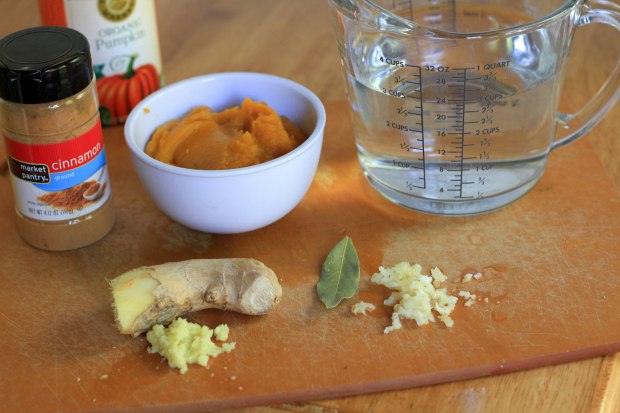 Next it was time to toss in the lentils. We went with the green variety. 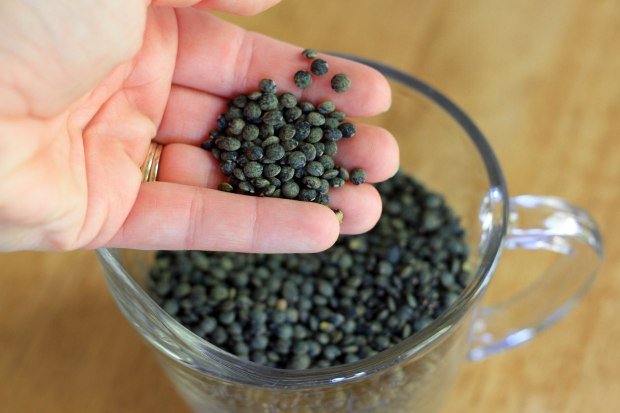 Then we added the pumpkin puree and water. We brought the mixture up to a boil and then reduced to a simmer for about 35 minutes (until the water had absorbed and the lentils were tender). 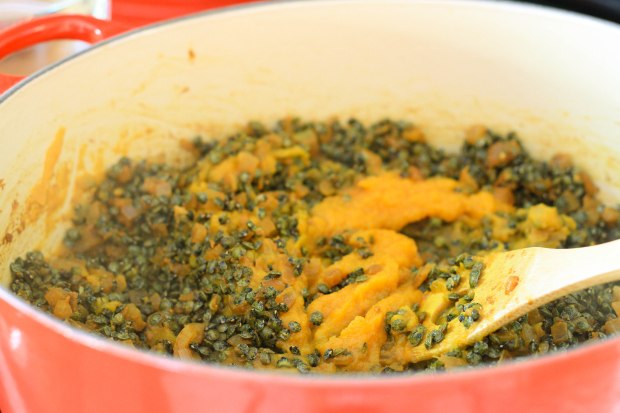 Finally, we removed the bay leaves and tossed in some chopped apples. We let the apples cook in the curry for about five minutes, then we added a bit of lemon juice and were good to go. 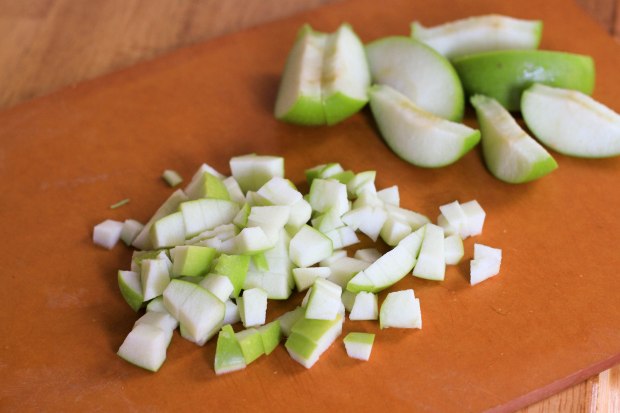 Can I just tell you how warm and fall-like the kitchen smelled. It was delightful. The aroma just brought a sense of calmness to the house (at least for me) and a definite sense of hunger. We were all ready to sit down for this one – well, most of us. 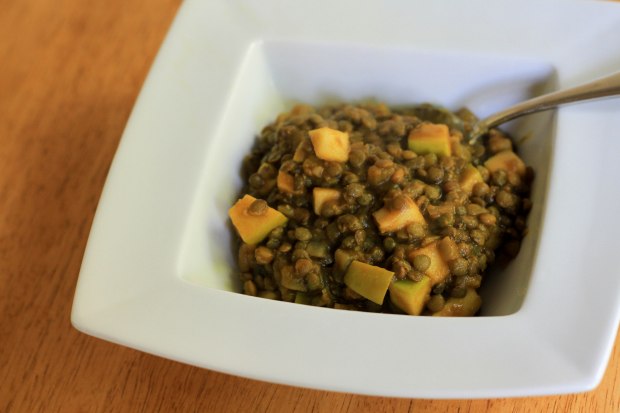 Miss A, however, was less than pleased with the meal sat before her on this particular evening. It didn’t look familiar and she wasn’t having any of it. Now on some nights I’ll make the kids something other than what Mike and I will eat. I have to pick my battles. But on other nights, what’s set before you is what you get. This was one of those nights. 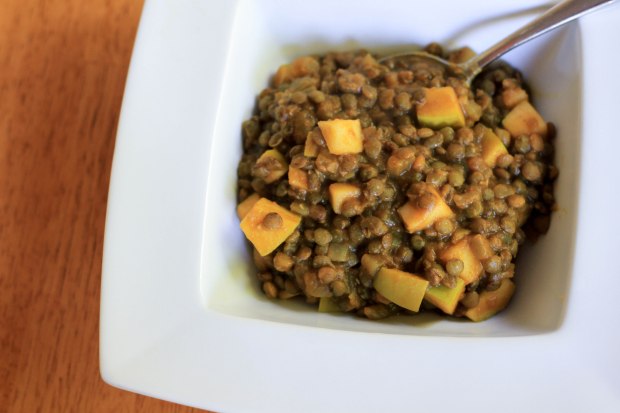 Now Miss A knows the rules. You have to eat some of your dinner before you can ask for a snack (which inevitably follows dinner by an hour or so), so she wasn’t arguing. That said, she was in definite pout mode – big eyes, puffed out lips, crossed arms. At least I thought she had crossed arms. As I turned back from grabbing something off the counter I saw her take her little tube of yogurt and squirt it at Mr. N! As I gasped, she then looked at me and squirted it all over the floor. (Yes, this was a school night.) 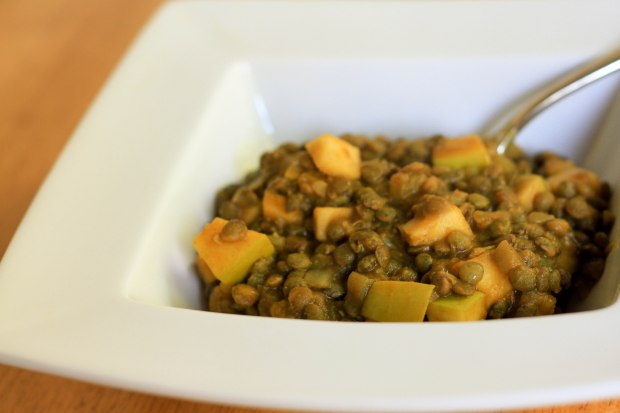 While I do empathize with her situation and know that she’s exhausted both emotionally and physically, we still have to make sure certain behaviors are not condoned. So I picked her up out of her chair and set her on the floor. Then I said she had to go to her room for a time out and when she came back she could clean up her mess and join us for dinner. As you can imagine, this was not what she wanted to hear. The tears started, the collapse to the floor happened and the flailing of arms and legs ensued. She was “too confused” to walk to her room. Her legs “wouldn’t work.” I was the “meanest mom” in the world. And clearly “no one” loves her. Twenty minutes later she was eating her dinner and telling us about her day, and 40 minutes later she was flipping at gymnastics with a smile on her face. 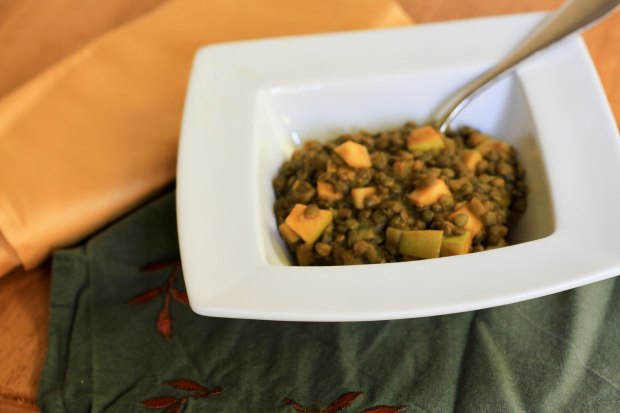 So you may now be wondering how the curry was received by our little Jekyll and Hyde. Well, she didn’t love it, but she did eat it. It was a 2 spoon vote for her. As for the rest of us, I thought it was the perfect fall dish and gave it 4 spoons. I still find myself craving it. Mike and Mr. N also enjoyed the flavor combinations and gave it 3 spoons each. They don’t crave it like I do, but they would happily eat it again. It was warming, very flavorful and definitely filling.

As for Miss A, well, we’ve been down this road before so I can look at it from a wiser perspective. I can often even find humor in the situation (after I’m out of her line of sight that is), especially since the juxtaposition between her happy-self and melt-down-self is quite drastic. That said, it is getting to be a bit trying as it continues to drag on. I miss my happy girl. I think we’re at the point of an intervention now. For Mr. N it was little jars that he could fill each day – one with M&Ms for good things that happened, and one with black liquorice for bad things that happened. We also had a little chart of things he had to accomplish each day – brush teeth, get dressed, homework, etc. – that he could track himself. He quickly learned that the good things in his day out-weighed the bad, and he enjoyed the sense of accomplishment with his little chart. Problem solved, kindergarten blues banished. It’s time to put my thinking cap on for Miss A now – she’s a different personality than Mr. N and requires a different parenting style. The chart with some twists might work. We shall see. It’s time to banish these blues.

We’ll be back soon with an Amazonian dish to share and then one of us will be picking a new country for the next adventure. I hope for all those celebrating holidays this season that they are off to a wonderful start. May your days be happy and tantrum free.