The big day is here! And no, we don’t mean the Super Bowl. 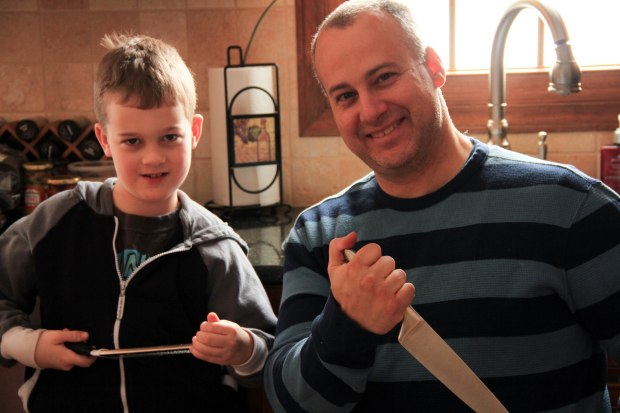 The winning baskets are in and we are ready to go. After a marathon shopping adventure (we finished as the grocery store was turning off its lights at 9 p.m. last evening), both teams are confident of a win today. 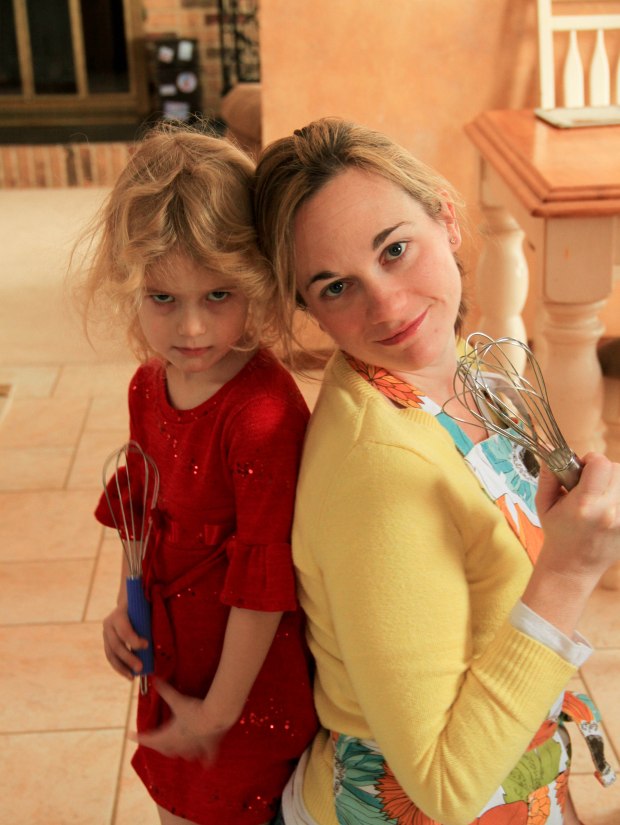 It’s Chopped Challenge 2013. Thanks to everyone that voted. We had some interesting races with some tight results. So without further delay, we’re going to kick off today with our appetizer basket which comes to us courtesy of Eva at Kitcheninspirations. Thanks Eva! 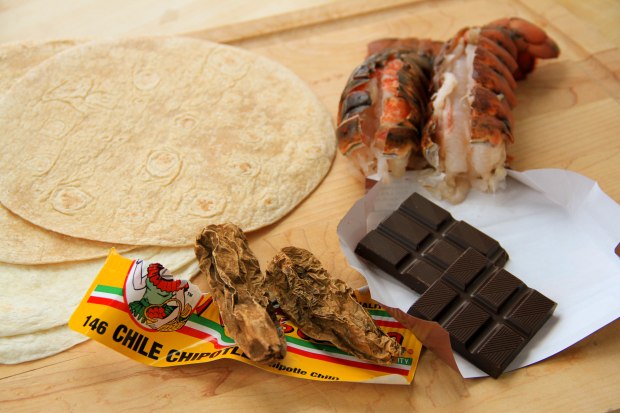 Lobster, fajita (tortilla shells), chipotle and chocolate! Let the cooking begin. We’ll update this same post throughout the day, so make sure to check back on our progress and results. The kitchen is already smelling amazing!

Well, Mike has been busy working multiple pots and pans at the stove. 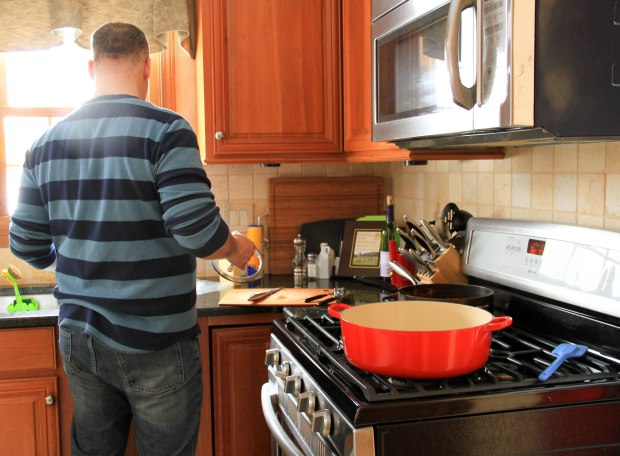 Mike caught me working the food processor and blender. Yes it’s been noisy around here.

And wait, what’s this? Have the kids deserted us already?! 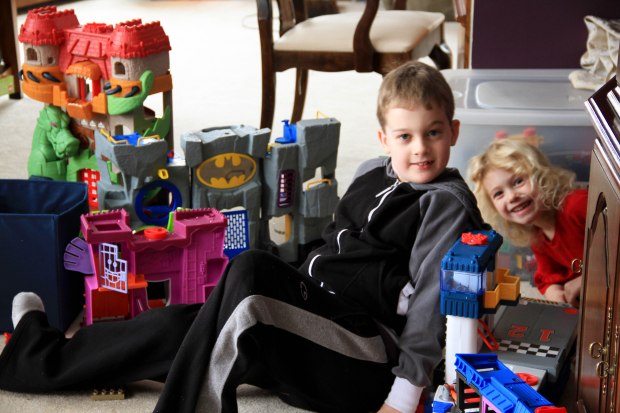 Mr. N said he’ll be back to help with dessert which spies tell me might already be in the works on Mike’s side of the kitchen. Hmmm. Both Mike and I have sauces going right now – one features chipotle peppers with chocolate and wine, the other ancho chiles, chiptole peppers and a blend of spices. Any ideas where this is going yet? We’ll know after the first taste test in a few minutes!

It’s almost time. Miss A is putting the finishing touches on our fajita shells.

If you guessed we’re going to make chips, you just might be right!

As for the boys, they’ve been done and are finishing with some photo-styling.

[UPDATE: 1:45 PM by ChefDad]Well, round one is in the books and already there is a judging controversy. I offer only this hint–we have honest children. You’ll have to wait until we’re all through to learn the final winners though.

Kristy and Miss A went with Salt and Lime Chips with a Lobster Mole, and it was a hit all around. I’m a sucker for salty snacks, and it was hard to keep my hands out of the bowl of leftovers after we finished our appetizer course.

In a shameless play for the children’s vote, I made pizza. Specifically, Flatbread Pizza with Chipotle-Chocolate Pizza Sauce, topped with lobster and arugula and Dubliner cheese. Mr. N and I were very happy with the effort, but as I was finishing it in the broiler, Kristy distracted me by posing for pictures and it stayed in a little too long, leaving a few slightly singed edges. We still ate it all. 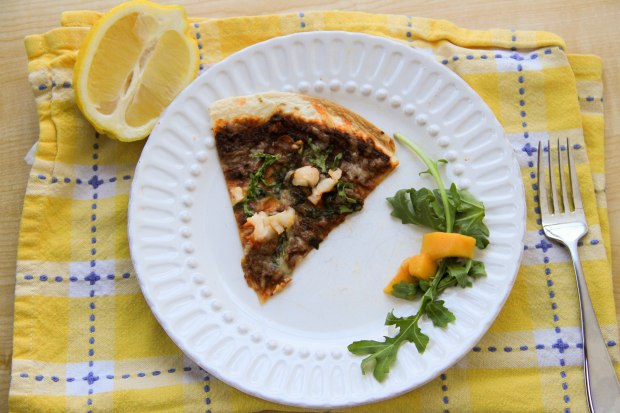 At least so far we’re staying ahead of the cleanup! Off to round 2…

And for round 2 we’ll be working with the basket put in by Eva’s fellow Canadian, Kelly at Inspired Edibles – artichoke hearts, smoked paprika, pistachios and black beluga lentils. 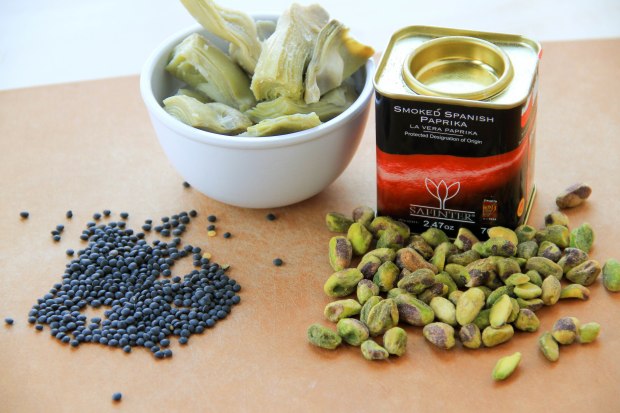 Now black beluga lentils were a new one to us. It took a little bit of research and hunting to find a store that carried these illustrious little lentils. They are small and when wet resemble caviar thus their name. 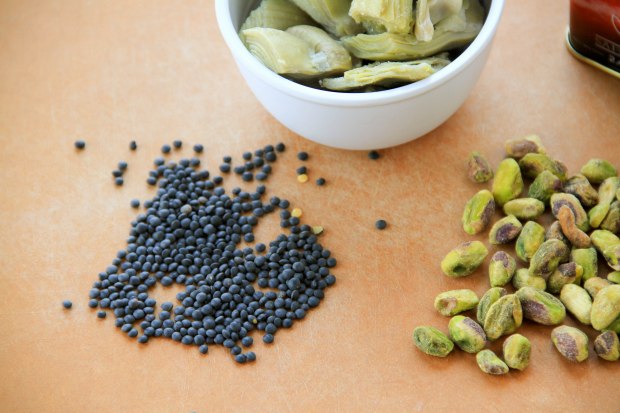 I think a few of the grocers thought I was quite insane…Beluga what? Fortunately we found them and not too far from home (plus at that point in the day it gave us an excuse to go out for dinner!). So what do we have planned for this round…well, Mike’s already got his lentils going.

And as for Miss A and I, well, we’re bringing our A game this time! Shhhh! 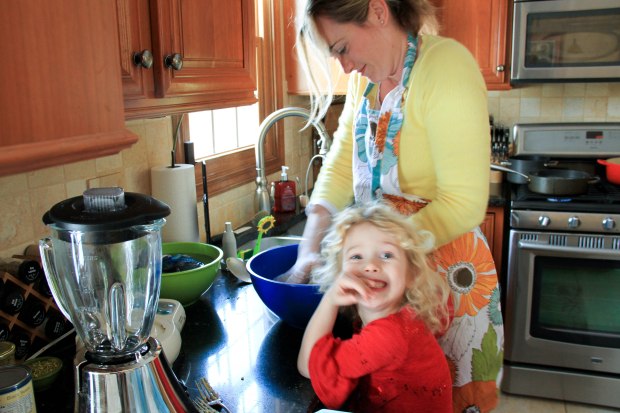 [UPDATE 3:26 PM by ChefDad]The intensity’s heating up as Mr. N pits some olives for Team Domi-Nation.

When you first start cooking the Beluga lentils, they look like pretty little caviar. Hah! Time to turn them into a big smashed mess. It’s too bad you can’t smell them through the screen though, they smell fantastic.

So much for intensity from Team Girls. Time to dance!

Kristy’s still hard at work, though, whipping up, well, I’m not sure yet, but she’s commandeered the stove. She’s got the artichokes, lentils, and some sun-dried tomatoes cooking up in her pot. Smells like garlic too.

I’m getting hungry with all the smells going on. Unfortunately, it looks like it’s gonna be a while before we get to eat, as Kristy just now had me haul out the mixer, and it didn’t take her much time at all to click her pasta attachment on there.

Oh no she didn’t…

Team Girls went big in Round 2, while Team Domi-Nation went out of their comfort zone. Kristy busted out the pasta maker, a far more gratuitous ploy than even my pizza-making in the appetizer round. Her pistachio-flour linguine with mussels, artichoke hearts, sun-dried tomatoes and black Beluga lentils with smoked paprika spice and goat cheese pulled flavors in from everywhere, and did so quite well. 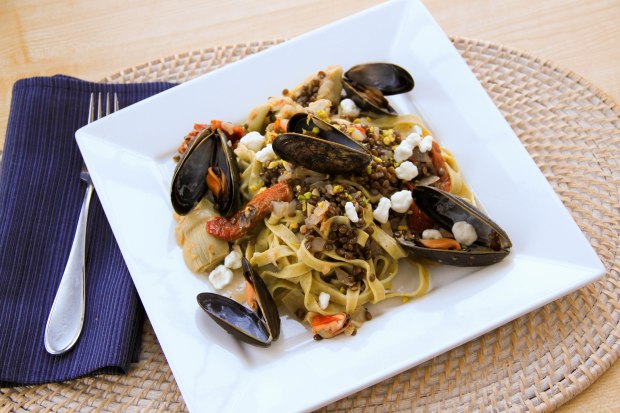 Regular readers of this blog will know that I am a carnivore, so the first thing I noticed in looking at the basket was the lack of a meat. No worries, I thought, I’ll make meat. Mr. N and I turned the lentils and ground pistachios into veggie burgers that packed plenty of protein and plenty of flavor including a healthy dose of the smoked paprika, then topped them with olive-artichoke salad like you’d find on a muffaletta sandwich. 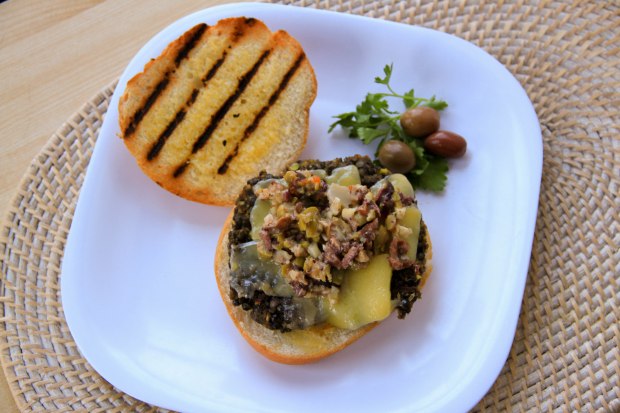 Now it’s time for Round 3, featuring mangoes, agave nectar, bacon and pretzels, courtesy of Dawn from First Look, Then Cook, which is good advice in addition to being a great blog. Team Domi-Nation of course is not heeding the advice, and Mr. N and I are flying blind as we attempt to triumph in the dessert round. 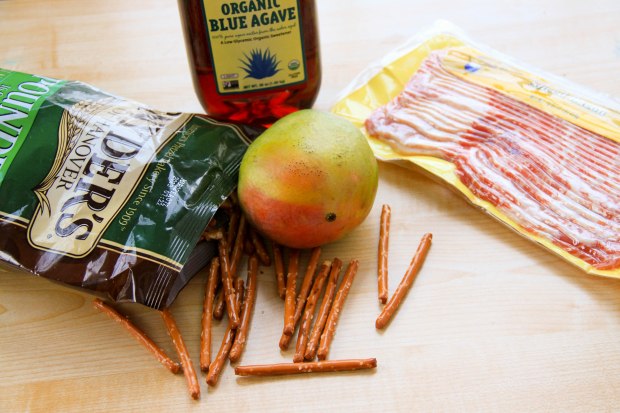 We’ve all been excited about these ingredients. Earlier today, Mr. N and Mike blended some mangoes, limes and lemons. I’m not sure what else went in the mix, but it’s been in the freezer most of the day. Miss A and I also prepped a little earlier with the breaking of some bread.

Here’s a little peak at what Mike and Mr. N have going (excuse the low-light night time pics), so clever! 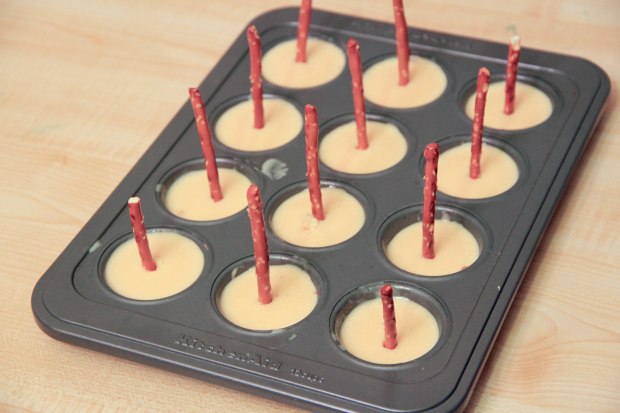 Mike’s also got his hands in some agave, pretzels and bacon. He said he’s going minimalist this round.

As for Miss A and I, well, we’re putting our bacon and agave to good use too.

And it’s officially over! Our dessert round was a big success. Mike and Mr. N knocked out some Mango Sherbet with candied bacon. Don’t you love the popsicle stick.

Miss A was a big fan.

And our other dessert…We gave a nod to the Crescent City, which is incidentally hosting this year’s Super Bowl, and made a mango bread pudding with candied bacon. Our pretzels are in the pudding.

Not too bad for our Chopped Challenge this year. We were done, cleaned-up and kicking back before 8 p.m. That’s a new record for us! One of these years perhaps we’ll get each round done in 30 minutes like they do on the show. Then again, maybe not. So who won this year’s Challenge? Mr. N and Mike… 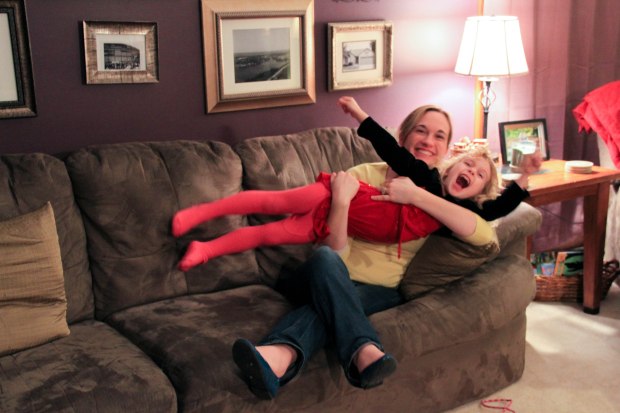 You’ve been chopped. Team Girls rules the day! It broke down like this:

Round 1 – The Appetizer Basket – Mr. N was the sole vote for the Lobster Mole. The rest of us went with the Lobster Pizza. That said, both dishes were delicious.

Round 2 – The Main Course Basket – Mike was the lone vote for the Beluga Burgers. The kids and I heavily favored the pasta. Again, we all enjoyed both meals and we’re looking forward to Beluga Burgers for dinner tomorrow.

Round 3 – Miss A was the lone vote for the Mango Sherbet. The mango bread pudding got the rest of our votes. I will say Mike’s sherbet rocked!!! It just didn’t quite work well with the bacon and pretzel.

I’ve got to say, I’m rather impressed with our efforts this year. There really wasn’t a bad dish in the day. We all enjoyed each recipe and are looking forward to our leftovers this week. We may not even have to cook again until next weekend!

Thanks for following along, providing the baskets and voting this year. We had so much fun. Over the next few weeks we’ll be posting our recipes. Hopefully there’s one or two in here you’ll enjoy as much as we did. Now I think we might just have time to catch the end of that other game that’s going on. 😉