Okay, so I’ve never actually had a home in Kentucky, but as a kid I was obsessed with all things Kentucky. I was convinced I was going to live there – on a horse farm of course – and I had plans to loyally attend the Derby every year. In fact as a kid, I was rather obsessed with the Derby too. I’d watch the race day coverage for hours and I’d make sure to get all the local newspapers from the weekend so that I could scrapbook the event.

Flash-forward 25 years and I’ve still yet to attend the actual Derby, and I have no desire to own or live on a horse farm, but the first Saturday of May still holds a special place in my heart – even if I don’t have time to sit down and watch the entire coverage. So you can imagine my smile when Mr. N picked Kentucky for our state night this week. Good timing. Now while I was tempted to make that bourbon sirloin steak again and call it a recipe from Kentucky, I didn’t think you all would buy it.

Instead we did some digging around for Derby Day recipes. That’s when we came across a recipe in Southern Living Magazine for Kentucky Hot Browns. We opted for the less caloric version and began by making the Parmesan cheese sauce. Ingredients include butter, flour, milk, Parm, salt, pepper and paprika. Feel free to add hot sauce if you like as well – we left it out for the kids’ sake.

We first melted the butter, whisked in the flour and then gradually added the milk. Once the sauce thickened, we added the Parmesan and seasonings. The sauce was nice and creamy.

Next we sliced up some multi-grain bread (Not homemade this time. We were going for speed for this weeknight recipe.) and topped it with slices of deli turkey.

Next we topped some slices (the ones for Mike and I) with caramelized onions and then poured the cheese sauce over top. I’ll admit the onions were a bit over-toasted. That’s what happens when you try to multi-task (read: answer three phone calls, snap some photos, have a three-year old tugging on your back pocket and a seven-year old still telling you jokes). 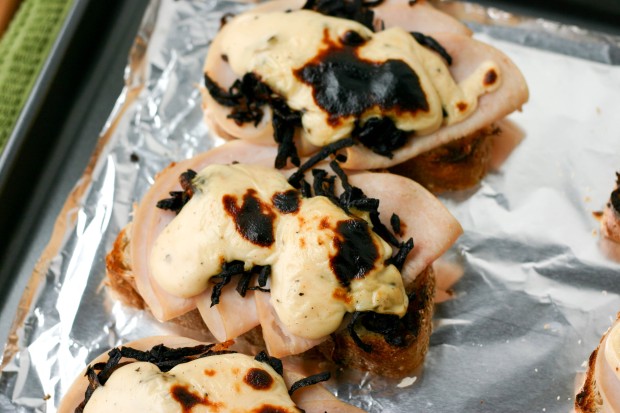 We then topped the open-faced sandwiches with tomatoes, bacon crumbles and an additional sprinkle of Parmesan cheese. (Yes, this is still the less caloric version.)

For the kids version, we left off the onion, hot sauce and tomatoes. We just knew those ingredients would not have gone over well. Unfortunately the hot brown was still not a favorite for Miss A. She took a lick of the cheese sauce and declared that she would not eat this again and that it was 1 spoon. She later ate the turkey and bacon crumbles.

Mr. N, however, was a big fan of the Kentucky Hot Brown. He even tried to convince Miss A that the cheese sauce isn’t great on its own, but when you eat it with the turkey, bread and bacon it’s really good. He came in with 3 spoons. 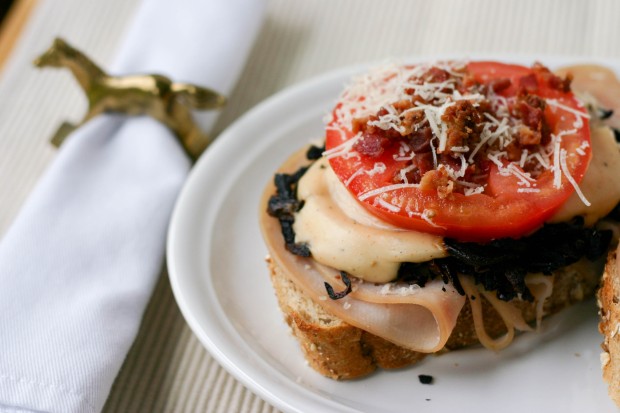 Mike and I fell somewhere in between the kids ratings. It was good, but not something we’d seek out again. We ended up at 2-1/2 and 2 spoons respectively, both agreeing that we’d prefer the Welsh Rarebit to this. 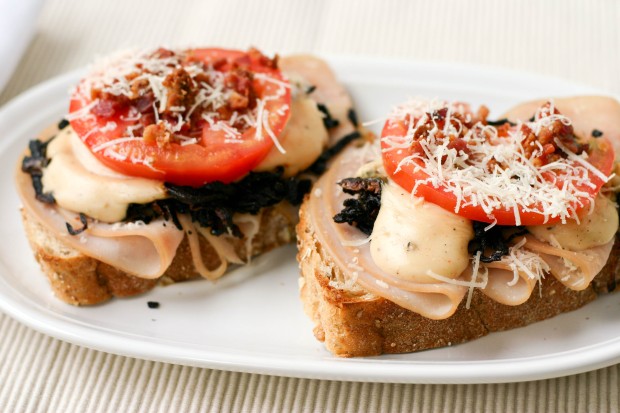 Now I do have to wonder if I’d like the more caloric version better. Still, I think I’d go rarebit again first. We’re going to have to find one more recipe from Kentucky before we wrap up this state adventure because I have a feeling Kentucky probably has some kickin’ desserts. At least I know Mike and I did when we stopped in at Jean Ferris on a recent weekend getaway to North Carolina. (Yes – we’ve got some North Carolina recipes coming up soon too.)

Have a great rest of the week and we’ll see you in a few days with Mr. N’s new international destination – Mongolia! Until then, I have to go brush up on this years horses so I can make my Derby pick.

31 thoughts on “My Old Kentucky Home”