We’re back to our Armenian adventures and cooking up one of our favorite foods. Mussels!! Now many of you may remember that back in the summer, on our epic road trip to Maine, we harvested and cooked mussels right from our own backyard. 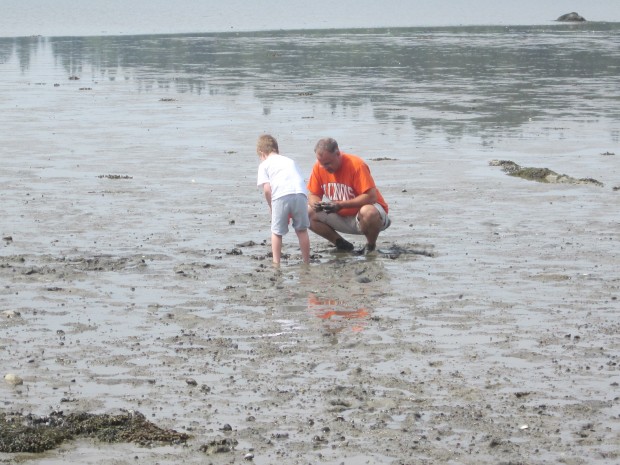 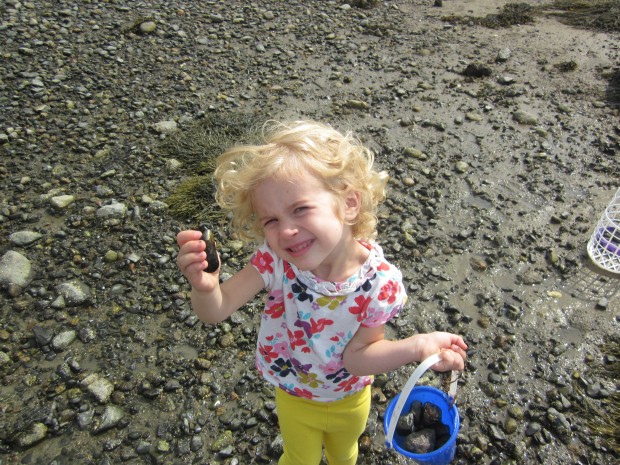 From the time Mr. N was 3, and Miss A was 3 as well, both of the kids have loved mussels. As a parent I always found this a little odd. I mean mussels aren’t exactly the prettiest of foods and not something you find most kids willing to try. Our little guys though – can’t get enough. So when we found the recipe for midia dolma, or stuffed mussels, we knew this was one we had to try. So we picked up some fresh mussels from the Italian grocer. 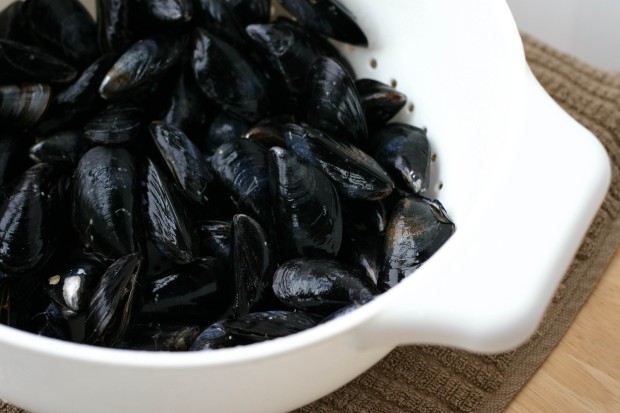 The mussels came scrubbed and de-bearded (Well, sort of de-bearded – not quite done to my level of satisfaction.). So we de-bearded as needed and rinsed them with fresh water. 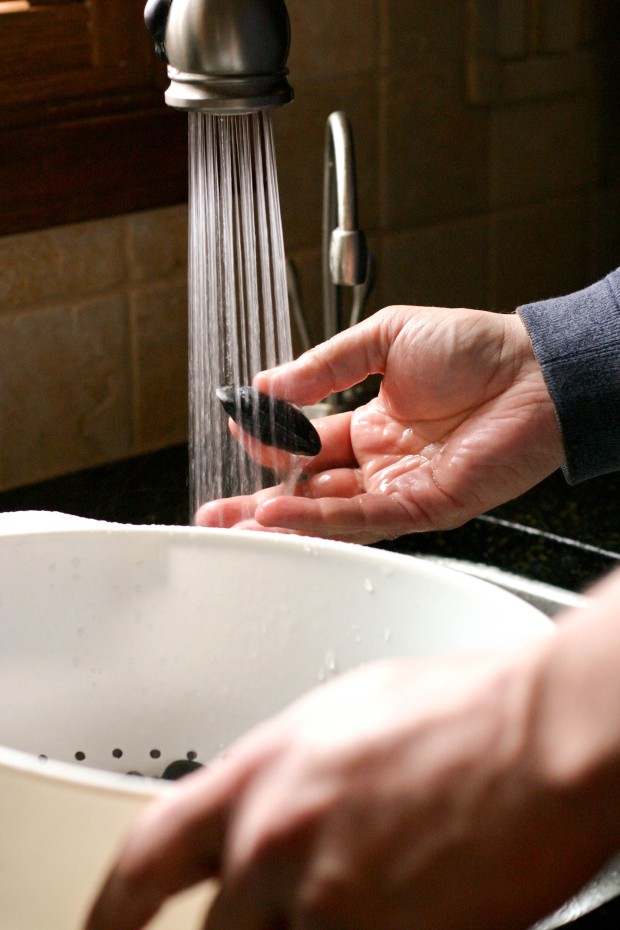 Next we gathered our stuffing ingredients which included basmati rice, a shallot, olive oil, salt, pine nuts, all spice and black currant preserves (fresh currants were no where to be found – at least not at four grocery stores). 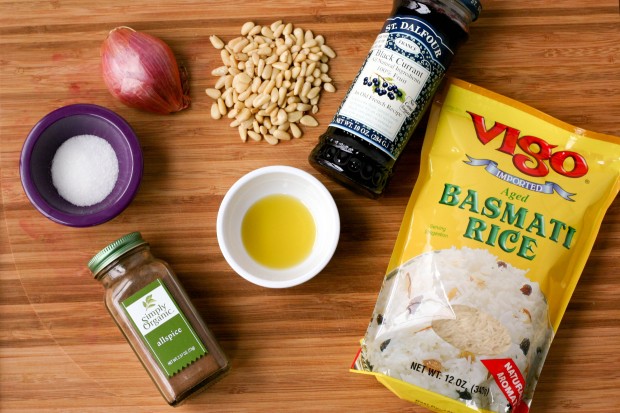 We mixed the stuffing up in a skillet…. 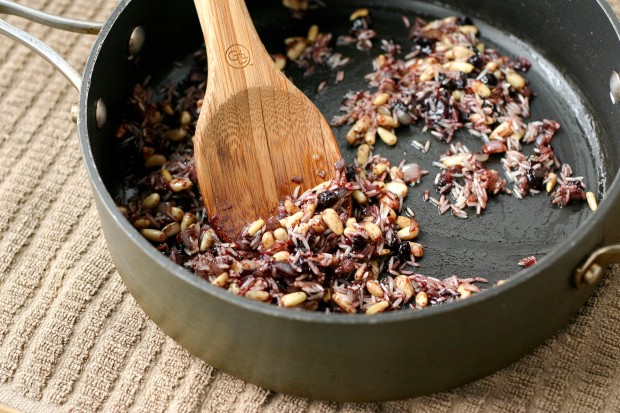 and gently opened the mussels and filled them with a a teaspoon or two of the stuffing. 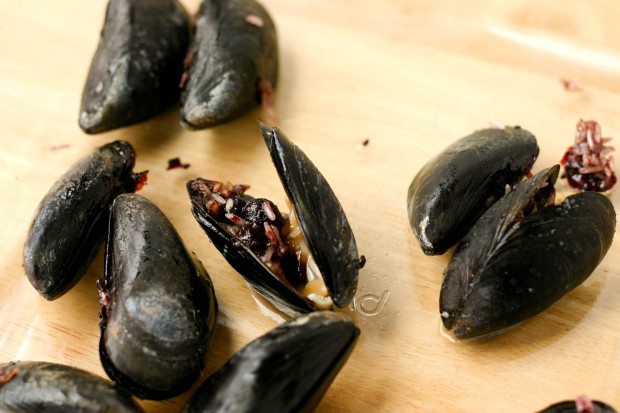 And this is where the current shifted directions. You see if you’ve ever tried to pry open a live mussel, it’s not so easy (and it feels a little mean). And then there’s the fact we learned in Maine, that if mussels don’t open during the cooking process that you should discard them. Well, by opening the mussels ourselves, how were we going to know whether they would have opened or not on their own after cooking. So we got spooked. And having had a bout of food poisoning from mussels on our honeymoon years ago, we weren’t about to mess with these little guys. Why ruin a good thing right?!

So, on to plan B. Scratch the Midia Dolma and on to Midia Meechoog, or Mussels with Rice and Currants. So using most of the same ingredients, we cooked the unstuffed mussels in the manner to which we’re more accustomed, in white wine and chicken stock. And we discarded the mussels that didn’t open, setting the “good” ones aside. 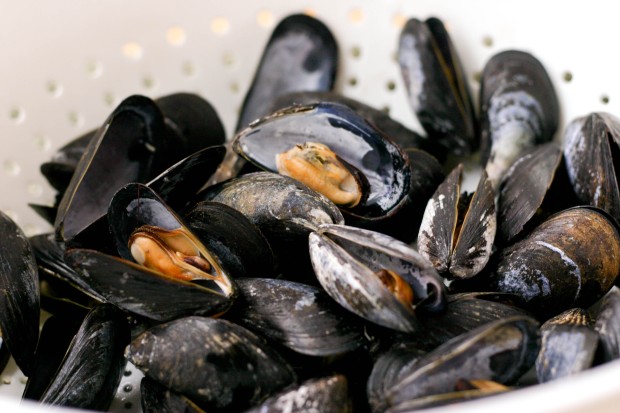 We then sautéed an onion in some olive oil (we ran out of shallots) until translucent. After that we tossed in the rice, water, wine and seasonings. The original recipe, which we typically try and stick to, called for ketchup to be used. I just couldn’t bring myself to use ketchup with rice and mussels, so we opted to replace ketchup with red wine. 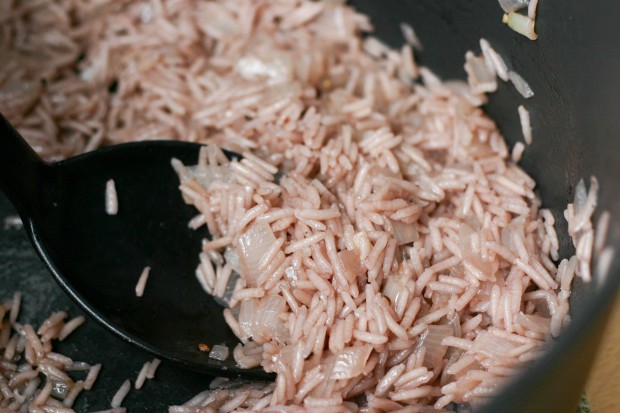 After the rice simmered for 10 minutes we were ready to add the currant preserves, walnuts (which we switched out with the pine nuts) and mussels. 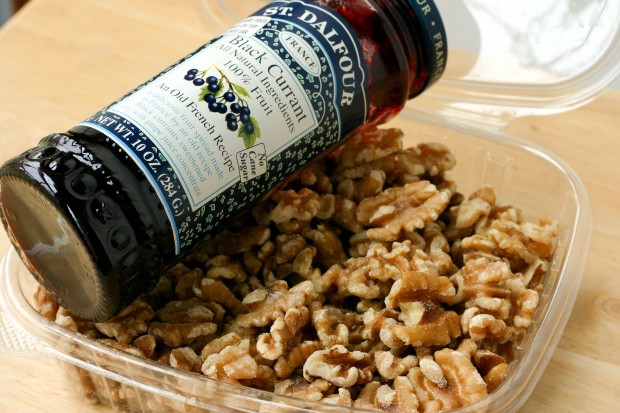 We then simmered the rice for another 15 minutes, before serving. 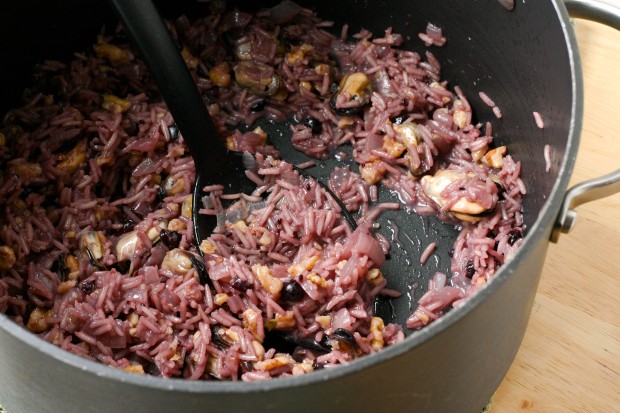 To serve the mussel dish, we garnished it with fresh lemon slices. 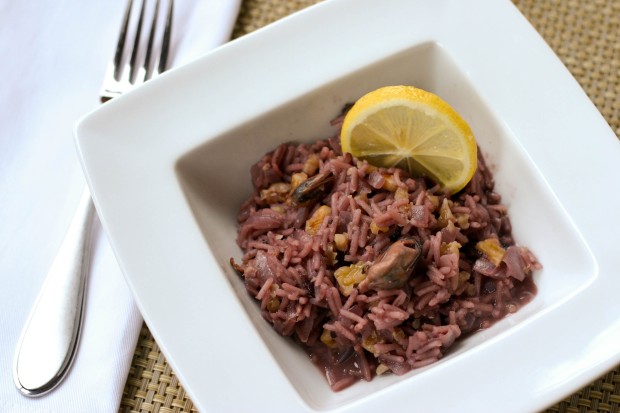 While we were really looking forward to the original stuffed mussels, we were much more comfortable with the new recipe – especially since we’d be feeding the kids too. (And I can still feel the pain from that bout of food poisoning – I do NOT want to go there again.) This new recipe was much more along the lines of something to which we were accustomed – cooked mussels and a risotto-like meal. We had high hopes to say the least. 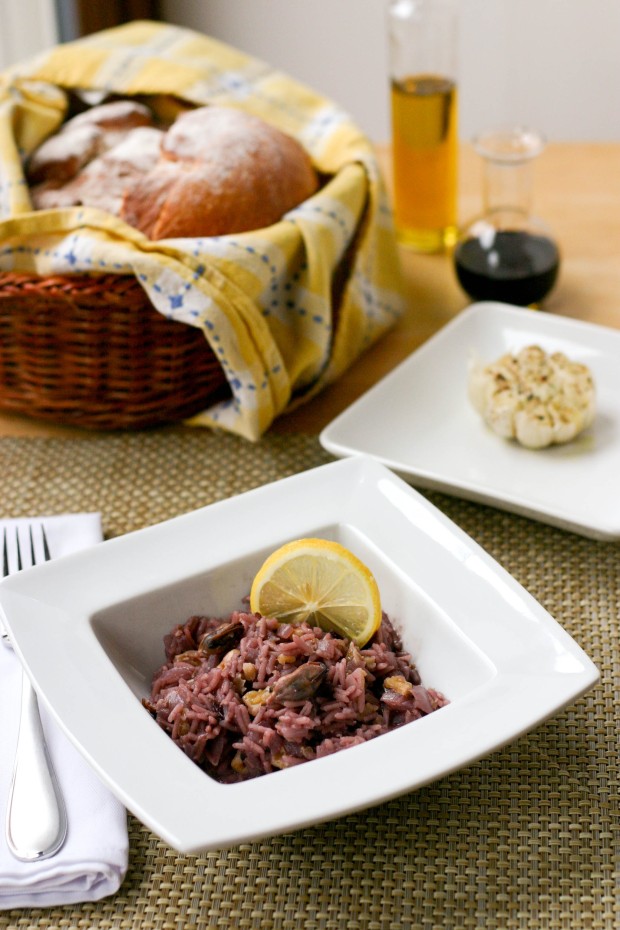 So what were the results? Well, we had mixed reviews. The mussels by all accounts were a hit. Not a single little mussel morsel was left. The rice, however, had mixed reviews. Currants were a new flavor to all of us and it was definitely a strong influence on the dish. Both Mike and I were a bit taken aback by the intense flavor they brought to the meal. It wasn’t a bad flavor by any means, just not one to which we were familiar. So we weren’t really sure what to make of it. That being the case, Mike came in with a 2 spoon vote and I was teetering between a 2-1/2 and 3 spoon vote. 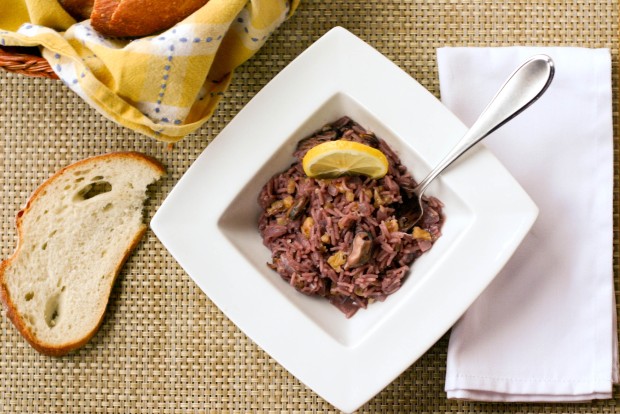 The kids on the other hand, were totally open to the new flavors and didn’t seem bothered by their intensity. Miss A ate all of her mussels and even had some bites of rice, which is practically unheard of with her. Rice is not something she really cares for, let alone is willing to eat. So she came in with 3 spoons for the mussels and rice. 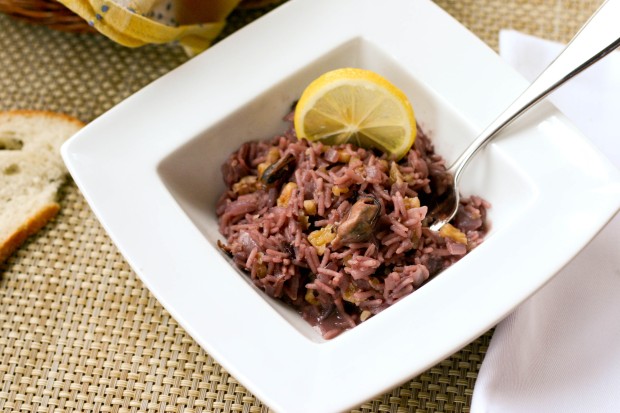 As for Mr. N, well he devoured three helpings of our midia meechoog. He absolutely loved it – the mussels, the rice, everything (even the onion – gasp!). When asked how many spoons, he didn’t even hesitate, “4 spoons. This is really good. Is Miss A going to eat all of hers?” 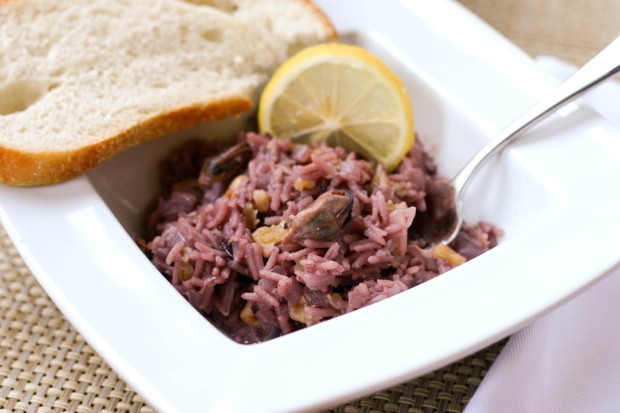 Now while Mike and I weren’t exactly raving about this meal, I have to say I was rather proud that we were able to switch recipes in mid-process and come up with something that was equally as Armenian and really not a bad meal. I mean anything that wins over the kids can’t really be considered a loss, you know. That said, I think Mike and I would prefer to stick to the recipes we know and love…mussels in white wine and cream sauces, mussels in a spicy red sauce, mussels in white wine, mussels in a seafood risotto or our favorite, mussels over linguine in a spicy red sauce – yum!

But I digress. So for those of you that are so inclined…Mr. N and Miss A just may be on to something. They’ve been right a time or two before. 😉

54 thoughts on “Flowing with the Currant”