Tonight we bring you another easy and healthy Nicaraguan recipe. We’ve been exploring Nicaraguan recipes for the past week or so and it’s fairly varied with heavy indigenous, Creole and Spanish influences. According to Wikipedia, the Pacific Coast cuisine makes use of local produce with the most common being corn. The Caribbean Coast tends to use more seafood and coconut. Our first Nicaraguan recipe, Curry Seafood Stew, clearly comes from the Caribbean side of Nicaragua. So tonight, we head to the opposite coast and have a recipe with a bit of Spanish influence.

I’m really diggin’ how simple and fast these meals have been so far, especially after our cooking marathon the past few weeks. I’m also lovin’ that Miss A and I have gotten to spend some quality time in the kitchen together. Cooking earlier in the day for that much-needed natural light has its benefits. And so, Miss A and I bring you the Ensalada de Jicama y Naranja (or Jicama and Orange Salad).

We started by first cranking up the tunes of course. Miss A and I don’t cook without our music. We then grabbed a jicama and two oranges.

We peeled and cubed the jicama.

Then we peeled and chopped up the oranges and tossed them in with the jicama.

Next we gathered the rest of the ingredients including salt, crushed red pepper, oregano and a lime.

First we zested the lime and then Miss A took care of juicing it into the mixing bowl.

Next she tossed in our spices,

and we mixed it all up. 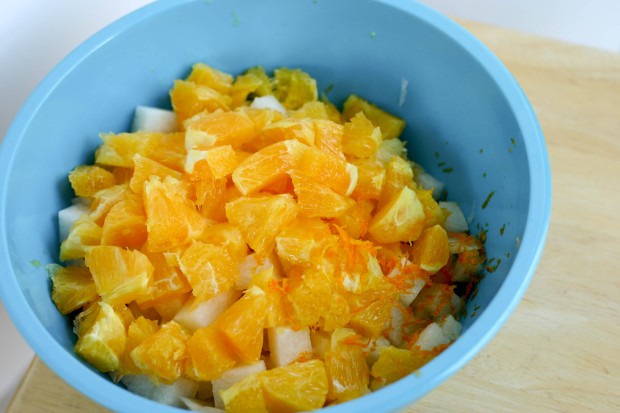 We let the salad sit for a few hours to marinate in the lime juice, and later that evening we served it alongside a mango glazed salmon we found at Whole Foods. 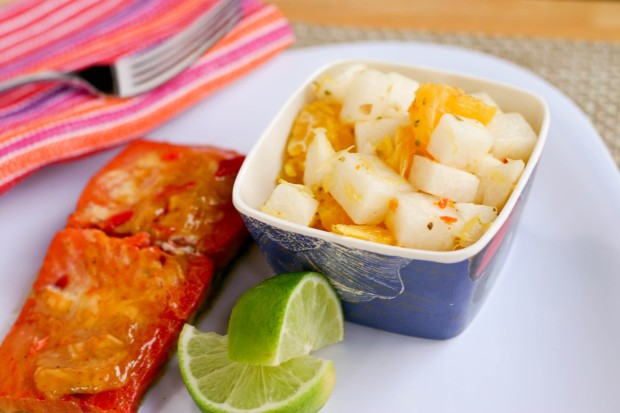 The salad was fresh, crisp, delightfully full of lime flavor and it married perfectly with the mango salmon – well, at least Miss A and I thought so. We both really enjoyed the whole meal and that’s saying something. The last time we put a plate of fish in front of Miss A it didn’t quite go that well. Tonight, however, three spoons from both of us.

As for the boys…it didn’t go over quite as well. Mr. N enjoyed the salmon and ate all of his oranges, but he was not happy with the jicama at all. As a result he only gave the salad 2 spoons, which was better than Mike’s ranking of a lowly 1 spoon. I’m not even sure Mike’s ever ranked anything that low. He too was not a fan of the jicama.

So I guess, what we’d say about this dish is that if you like jicama give it a shot. If you don’t, it’s probably not for you. Miss A and I both like jicama. It’s not something we crave, but when we eat it, we enjoy it. I would also recommend slicing the jicama julienne style and tossing in some cilantro (just for you Courtney!). I think it will be even better that way. And if Miss A and I ever get the hankering for some more ensalada de jicama y naranja, we’re serving it with citrus covered seafood. It’s a perfect match.