We hope that everyone is enjoying the holidays. We had a wonderful weekend complete with a visit from Santa (the kids are still besides themselves), laughter, love, family and delicious food. We’d like to start by giving a shout-out to some of our blogging friends who made our holiday all the more delicious. Unfortunately I don’t have photos of all the dishes we made, but each one was every bit as good as we hoped!

We spent Christmas Eve having a family dinner with just the four of us. We dressed-up, opened presents, ate our traditional homemade Italian dinner, followed by a tour of Christmas lights in our Christmas pajamas while we ate cookies in the car. Our meal this year featured two amazing recipes from Linda at Savoring Every Bite. The kids especially enjoyed her Calamari Pomodoro. We did too, but the kids beat us out of seconds and thirds. They love their calamari. So while the kids devoured the calamari, Mike and I enjoyed the Pasta with Pecorino Herb Walnut Sauce. (Which incidentally makes for great leftovers too!)

We kicked off Christmas day with our Maple Bacon Biscuits – every bit as good as the first time and then got ready for the festivities.

We hosted Mike’s family at our house this year and started by serving Katherine’s (Greg’s amazing other half) Baked Brie en Croute. We made ours with a fig preserve that was fabulous with the pecans and brown sugar. I can’t (and won’t) pick between Katherine’s and ChgoJohn’s brie – both were down right fantastic and have made me a little obsessed with the cheese. (Mike still can’t stand brie – but the kids and I are new found fans.)

Our main course consisted of a glazed smoked ham with a side of Butternut Squash with Shallots and Sage courtesy of Baker by Nature. We made a few slight adaptations – we added garlic and topped with crushed pecans. This was delicious and one dish of leftovers that I won’t feel guilty about devouring.

We also served a side of scalloped potatoes featured a while back on Sweet Caroline’s blog. They were worth the wait. Unfortunately they were mostly eaten by the time I remembered to take a picture, so we’re gunna leave that one to the imagination.

We also used a dessert recipe from Baker by Nature. This one was for Ashley’s Cranberry Eggnog Muffins. We had never tried anything close to this recipe before, so it was fun to make (and really easy!). The kids, especially, have been a big fan of these gems.

So again, many thanks to our fellow bloggers – those featured here and otherwise – you have made our lives all the more delicious. And now on to our recipe for the day…a Raspberry Tart – because we all need a little more dessert before the New Year’s resolutions kick in.

First we prepared our crust. We followed the same recipe that we used for our lemon tarts which features lemon zest, cream cheese and vanilla.

We rolled out the crust, large enough for our 9-inch tart pan.

Then we rubbed a bit of butter over the crust and sprinkled it with cinnamon and sugar and sliced almonds.

Next we mixed together our tart filling of raspberries, sugar, flour and cream and poured it over the crust.

We used fresh raspberries, but frozen would work as well although the amount of flour may need to be increased to help absorb some of the extra liquid.

The raspberry tart baked for 45 minutes at 375F. The crust was golden brown and the raspberry filling was good and set.

Now if you have been following the blog for a while, you know how we feel about our berry cobblers, pies and tarts. This dish was unquestionably a four spoon dessert.

It’s one of those dishes that we have to make sure we cut equitably…because we’re all paying attention. Especially Mr. N. You don’t get between him and his berry desserts. 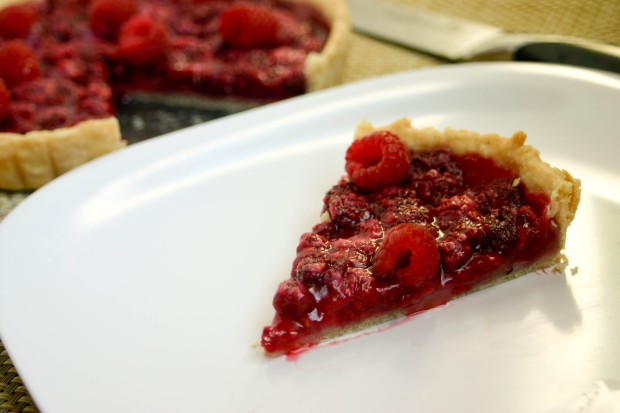 Happy Holidays to everyone! We hope you’re enjoying a relaxing week filled with fun and good eats. Stay tuned later this week when we’ll have an interactive and fun poll for a special day. 🙂

43 thoughts on “A Delicious Time of Year”