No. No. No. We’re not talking about that kind of pillow talk. This is a family blog after all. We’re talking about our next recipe from Uzbekistan, Kovoqli Varaki Somsa – or Pumpkin Samsa.

We came across several samsa recipes on Uzbek National Cuisine and quickly settled on the pumpkin version. Just because Thanksgiving is over, doesn’t mean we’re over the pumpkin yet. As for the samsa, well it’s similar to the manapua we made for our Hawaiian adventure and also to the old college favorite, Hot Pockets (only much, much tastier).

For today’s recipe Mr. N and I were cooking partners. Miss A was off at her friend’s birthday party – her very first party (Now if that didn’t give me scary flashes of what’s to come…). If you know anything about Miss A, you know she was excited and feeling very important, so she wasn’t sad about missing our cooking adventure today. And I have to say, it was quite fun to be in the kitchen with my favorite boy (works out having a boy and girl – they can both be my favorites!) who expertly whisked the eggs and added them to our flour to create a dough batter.

We then gradually added some salt water to the dough until it adhered and formed a nice round ball.

The dough was then set aside to rest for about 20 minutes. In the meantime, Mr. N and I gathered our filling ingredients including pumpkin puree, onion, garlic, sage, brown sugar, and pecans. The original recipe requires mutton fat, but we took a pass on that and instead used plain Greek yogurt and a bit of butter.

We mixed all the filling ingredients together and added salt and pepper to taste.

Then we returned to our dough and rolled it out until it was 1/4-inch thick. Mr. N then took care of adding a nice layer of melted butter over the top of the dough.

Next we rolled the dough into a log and cut it into two-inch sections.

Each section was then rolled out, again to 1/4-inch thickness, and about 3 tablespoons of the filling was added to the center of each section.

We folded the samsa into little rectangles. Traditional samsa is triangle-shaped, but let’s just say Mr. N and I are geometrically-challenged. (Okay, I am.) So we placed our rectangles on a parchment lined baking sheet, popped them in the oven and baked them at 350F for about an hour. 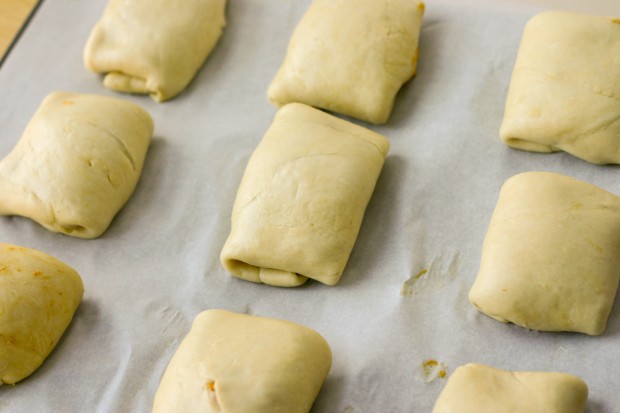 Once the pumpkin samsa were golden brown we removed them from the oven and served them up for dinner. 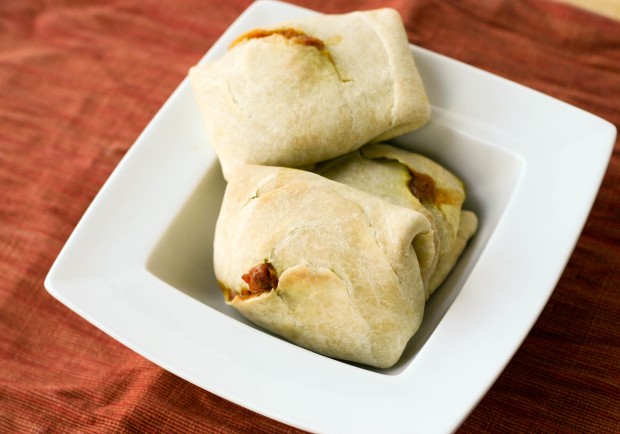 Miss A was back home for dinner and she immediately termed these little delights, Pumpkin Pillows. I suppose they do look a bit like little pillows.

Well, the pillows were an instant hit with Miss A and Mike. They both rang in with 3 spoons. Miss A seemed particularly fond of the meal – she was gushing about it and said it was 15 spoons – even though she didn’t eat much. It’s hard to figure her out sometimes. Mike, however, was happy to eat his share and thought they would make great leftovers as well.

Today’s sous chef, however, not a big fan. Mr. N gave them 1 spoon. He “hated” them and opted to eat some microwaved chicken nuggets instead. Yeah, he thought they were that bad. As for me – a solid 3 spoons. They weren’t quite 4 spoon worthy, but I have to say I ate more than my share. It’s a definite comfort food. Maybe it’s that they reminded me of the comfort of my college days, or that it gave me the carbs I was craving, or that the garlic hit the spot. Whatever it was, I ate plenty – and Mike was right – the leftovers are good. 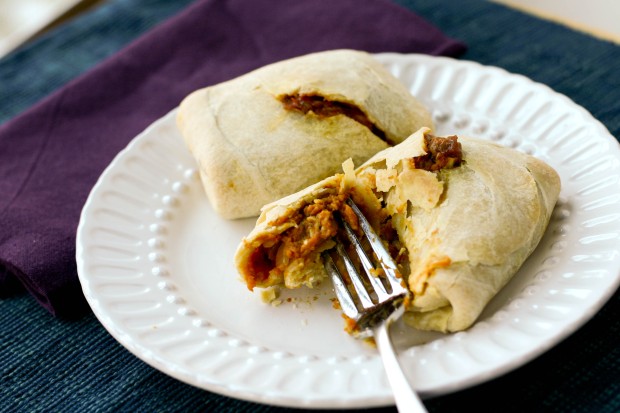 So “yay” for Uzbekistan! That’s a solid two for two so far. (Well, for most of us.) And let’s just say we have another winner coming up soon. Who knew that Uzbekistan had such delicious little meals? Apparently Miss A did. That girl is wise beyond her years – believe me, she is and it’s scary sometimes. Thank goodness she has a big brother to look out for her. 😉