It’s state night again! Tonight we’re featuring a traditional Minnesota Hotdish at the request of Mr. N’s prize winners, Molly and Erin. Hotdishes, or casseroles, come in many shapes and sizes, but Minnesota hotdishes traditionally combine a meat, starch, veggies and cream of mushroom soup. This past January, Minnesota Senator Al Franken invited the other Minnesota Congressional delegates to a hotdish cook-off. While Senator Klobuchar’s hotdish won the cook-off, we chose to adapt Rep. Betty McCollum’s Pork, Cranberry & Wild Rice Hotdish since it incorporates wild rice which is home-grown in the land of 10,000 lakes.

We started making our Pork, Apple & Wild Rice hotdish by preparing 2 dry cups of wild rice by following the package directions; although we always add coriander to the rice as well. Then we began chopping some shallots, mushrooms, pork and fresh sage.

Miss A was again at the ready with the chopping knife and was a big help for dad.

Once everything was chopped we added a little butter in the wok with the chopped sage and cooked it over medium-low heat.

Next we added the shallots, mushrooms and garlic and continued cooking for another several minutes. 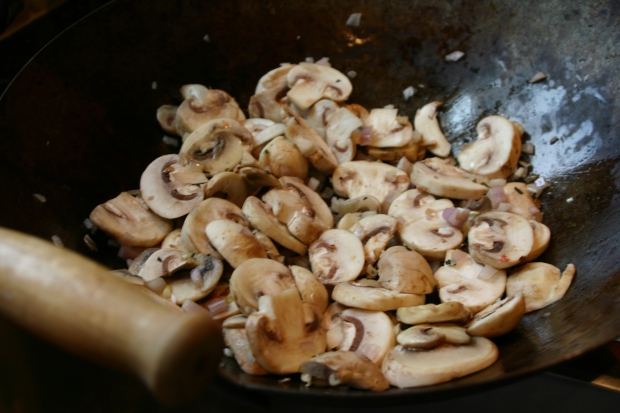 Lastly we added the cubed pork loin, covered the wok and sautéed the mixture until the pork was thoroughly cooked, about 8 minutes. Next we drained the juice.

We then combined the juice with a  1/2 cup of chicken stock and poured it into a large baking dish with the mustard, 2 cans of cream of mushroom soup and melted butter.

Next we added the peeled and chopped apples to the dish. Mr. N was our master mixer.

And finally we mixed in the ingredients from the wok, the cooked wild rice, a pinch of nutmeg and craisins (cranberries sadly are out of season).

The hotdish was baked at 350F for 25 minutes. We removed the dish from the oven, added french fried onions over the top and baked for another 10 minutes.

Our Minnesota hotdish was then complete and ready to serve. Although Mr. N was nervous when he saw the cans of cream of mushroom soup (he hates mushrooms), he was the first one to ring in with a vote – 4 spoons! Miss A also said she liked it but didn’t want any rice, so she gave it 3 spoons. 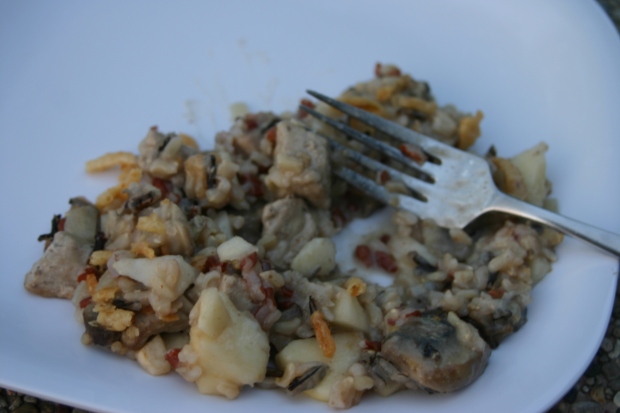 Dad thought it was good, but not great, so he rang in with 2 spoons. I’m going to give it 3 spoons. I think it’s a good meal for fall and winter weather (or 8 mos. out of the year in Minnesota), but too heavy for an 80-degree day. I’ll be filing away this MN hotdish for the fall. I’m certain we’ll make it again. Oh – and as a bonus it makes lots of leftovers for another easy meal later in the week!