After our big British feast this past weekend, and its piles of leftovers, we’ve been preparing meals a bit on the lighter side. We also decided to break from our usual state night dinner in honor of Cinco de Mayo and cook another new recipe from Mexico. Mr. N was very excited about this because Mexico was his first choice at the start of this adventure. He’s a big fan. So for our fiesta we tried a recipe from Parents Magazine from March 2010. It’s a low-cal take on a traditional Mexican favorite – the enchilada. These Gooey Enchiladasreportedly lost 131 calories, 14 grams of fat and 400 mg of sodium from a standard Enchilada recipe.

Dad started by heating the oil in a large skillet to cook the onions and garlic. After about 7 minutes he added the fire-roasted tomatoes, coriander, cumin, oregano and pepper; and in a separate skillet he was browning the ground chicken and black beans. In the meantime, Miss A and I chopped up the cilantro which was added to the sauce. She was on a chopping kick this week. 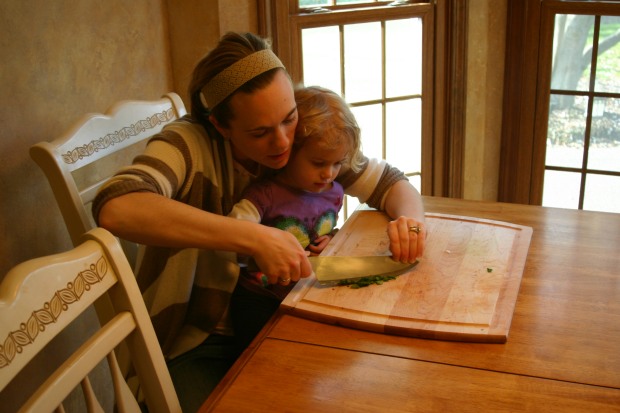 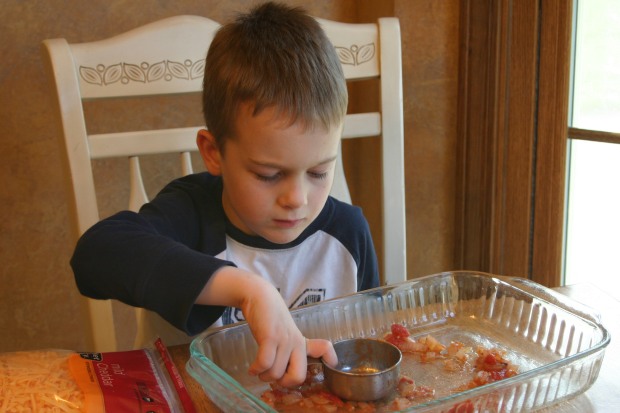 He then added the meat and beans and some cheddar cheese into the tortillas, sampling quite a bit along the way (as only a good cook would). Next he rolled them up and placed them in the baking dish. (We likely added a few calories here as we used multi-grain tortillas instead of corn tortillas.)

The enchiladas were covered with the remaining sauce.

We baked the enchiladas uncovered at 350F for 15 minutes. We then added some Colby Jack cheese over the top and baked an additional 5 minutes.

Everyone was very happy with the results. The enchiladas were healthy, tasty and super easy to make for a weeknight meal. They received 3 spoons all around. Mr. N was even teetering on giving them a 4 – that’s saying something! We kept these mild for the kids, but this recipe can easily be kicked up for those partial to spicy foods. Stay tuned as dad takes us on another international tour this weekend. Hasta luego!

16 thoughts on “A Healthy and Tasty Enchilada”