I do not have a green thumb. Plants under my care do not live long. It is a proven fact. Still, each year I try to grow herbs and flowers and make our backyard somewhat less of a weed garden. Two years ago we tried to grow herbs from seeds and that little experiment ended up all over our living room carpeting. Last year we bought grown herbs and planted them along the house. Our results were mixed. The sage, rosemary and thyme did very well, but the basil died within a few weeks. 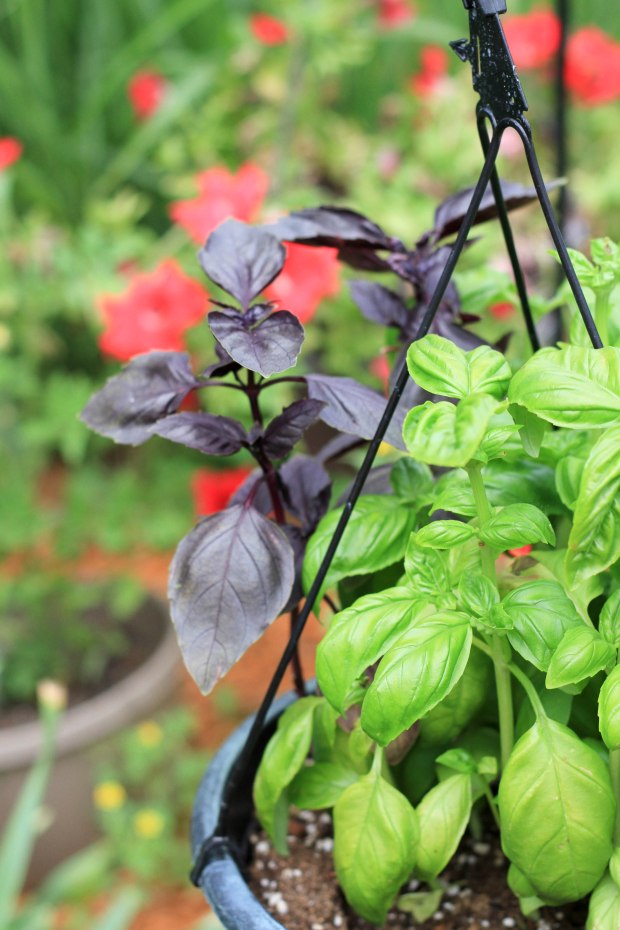 This year, we tried again. We’ve also added sun flowers, baby tomatoes and impatiens to the mix. The tomatoes were Miss A’s request. I warned her that I’m not very good at gardening, but she insisted and said not to worry, she’ll take care of them. We’re six weeks in and I’m proud to report that the herbs are growing well. Even the basil, while not thriving, is better than last year. We have three sun flowers (we planted many more than three seeds mind you) are coming up and will hopefully survive. The impatiens are thriving and Miss A’s baby tomatoes are producing. I can’t report on how they taste, because so far, she has eaten them all. She said they are perfect.

So today’s recipe brings a bit of our “thriving” garden into the mix and features some decidedly summer flavors. After a recent visit to our favorite farm, I learned how to make a beautiful oat quiche crust from scratch. The kids loved it (especially Mr. N) and, as you may remember, I love any kind of non-yeast dough I can get my hands on. The fabulous thing about a quiche is that it can be suited to a variety of different flavors. Have leftover veggies in the fridge? Toss them in! Fancy cheese, regular cheese…no matter, it’s your canvas. So with the oat crust under our belts and our growing garden as inspiration, we created the Tomato Mozzarella Quiche.

Once the dough is ready, it’s pressed into a pie dish – over the bottom and up the sides. 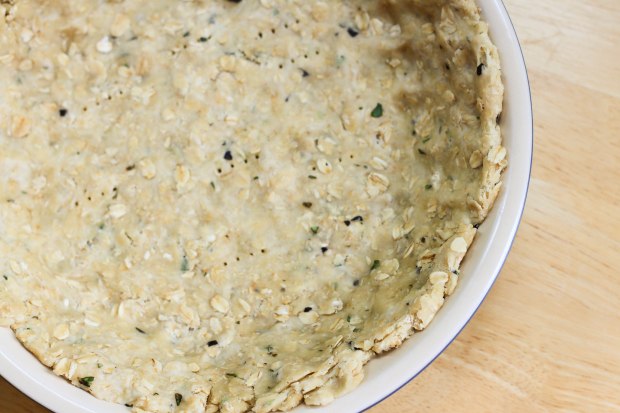 Next it was time for our ingredients. First we went with a layer of caramelized balsamic onions because they’re just really good. I don’t have a recipe for these. I just caramelized onions and added some balsamic vinegar toward the end of cook time. They provided the first layer of our quiche.

Next came the tomatoes with a layer of fresh basil leaves. These aren’t the tomatoes from our garden since those have all been eaten, but the basil was ours.

Then came the slices of fresh mozzarella (we’re lucky this didn’t disappear either, as Miss A is known for devouring a lot of fresh cheese).

Finally, it was time for the eggs. We whisked together several eggs with half & half as well as some more chopped basil. This was then poured over the tomatoes and mozzarella, and then seasoned with a spritz of lemon juice, salt and pepper.

The quiche baked for 45 minutes at 350F and I couldn’t wait to get my hands on it. Tomatoes, basil and mozzarella are some of my favorite summer flavors. I knew this would be delicious (at least I hoped it would be). I had high expectations.

That said, this meal was somewhat of a risk. While I knew Mr. N was a huge fan of the oat crust, I also know he doesn’t like tomatoes. And while Miss A is happy to snack at tomatoes and mozzarella on their own, she doesn’t much care to combine them (although I think she’ll learn!). 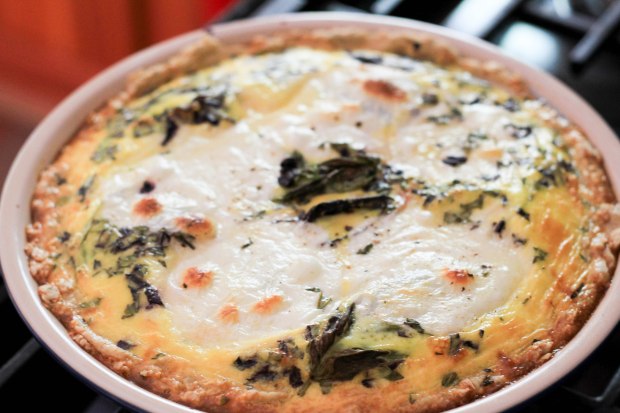 The quiche was cooked perfectly. The center was slightly wiggly and it was cooked all the way through. It sliced cleanly and served easily. We enjoyed our quiche with a fresh spinach salad and a piece of homemade rosemary bread. A lovely homemade summer meal. (Especially lovely that it’s finally a homemade meal!)

We tried the quiche both on its own and with a bit of a balsamic reduction. Both were delicious. The tomatoes were juicy. The basil was fresh and peppery, and the onions were sweet and succulent. It was divine. At least for me. It clearly lived up to my expectations and I’m happy to give it a 4 spoon rating.

Mike also enjoyed the quiche, but not as much as I did. He felt the onions should have been dispersed more throughout the quiche. So he gave it three spoons. I didn’t have a problem getting a bite of everything on my fork, but I see his point. Still it didn’t alter my vote one bit.

Mr. N also gave the quiche a 3 spoon vote. He loved everything about it – except the tomatoes. They were cast to the side. Still the rest of it he seemed to enjoy and even asked for seconds. (Don’t worry, his tomatoes did not go to waste!)

Miss A, who is incidentally our birthday girl this week, only gave the quiche 2 spoons. She said that she didn’t mind eating it, but wouldn’t want to eat it again. She did deconstruct her quiche and ate every piece of tomato, mozzarella and crust. The eggs and basil were left behind.

Not too worry though, Miss A will have her own special birthday recipe coming soon. I think she may even make it herself. She is plotting. She’s even planned her pictures. Definitely a food blogger in the making.

We have another week of more birthday celebrations and plays for both of the children coming up. Miss A has decided that she wants a bit of the stage glory. We’re not yet sure how Mr. N will react to sharing the spotlight, but it’s certain to be entertaining!

Have a wonderful couple weeks. Cheers!