And by sharing, we don’t just mean sharing the recipe here, but actually sharing the dessert with family and friends. It’s far too dangerous to keep too many of these lying about the house! At least it would have been for us. So what is the dessert that earned the coveted 4 spoon vote all around (400 spoons from each of the kids in fact)? It’s the Paczki!

A few weeks ago, Miss A announced that she was ready to start cooking around the world again. It had been a while what with the whole Chopped Challenge thing. I asked her if she had a country in mind for our next culinary adventure and she announced it would be Poland. Mike then instantly suggested that we make the Polish dough nuts, paczkis.

The timing worked out perfectly. Paczkis are traditionally eaten in Poland on Fat Thursday (the Thursday before Lent). It was a way for families to use up the lard, sugar and eggs which was forbidden by Catholic fasting during Lent. Here in the states, and especially Chicago, paczki are more commonly eaten on Fat Tuesday (the Tuesday before Lent). In fact, here in the Chicago area, Fat Tuesday is more commonly known as Paczki Day; and wouldn’t you know that’s in two days!

We’ve never once had a paczki. Nor have we ever come close to attempting to make dough nuts – particularly given my history of unsuccessfully working with yeast. So needless to say, I was nervous.

The sous chefs were a big help preparing the dough. Mr. N managed the proofing of the yeast, while Miss A worked on the dough ingredients. It’s a simple combination of butter, sugar, milk, yeast, salt, flour, eggs and a bit of rum.

The dough came together very easily in the stand mixer. It was soft and springy. 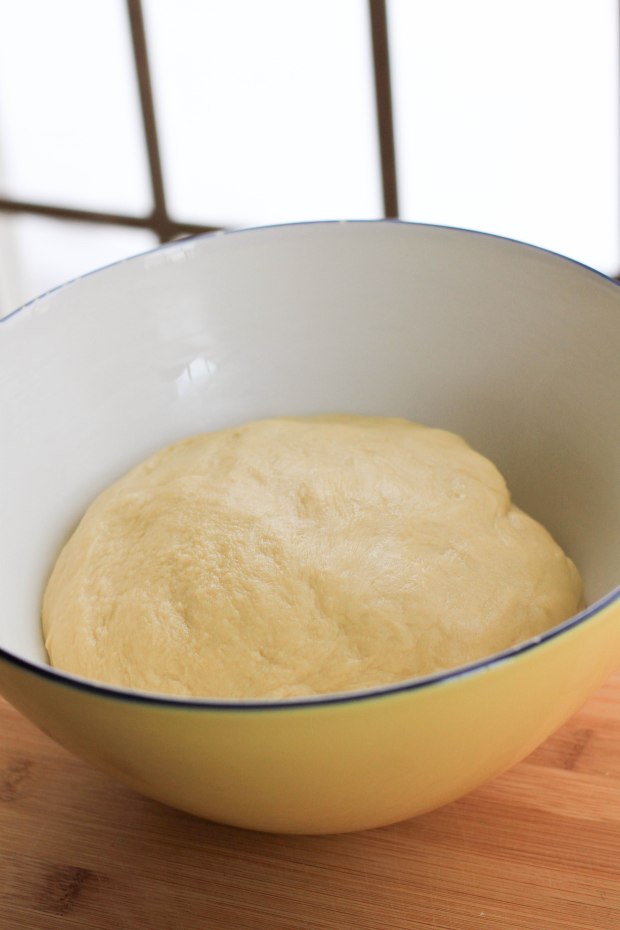 Most importantly, though, it rose. My dough actually rose! This was the first victory and it made me much more hopeful. 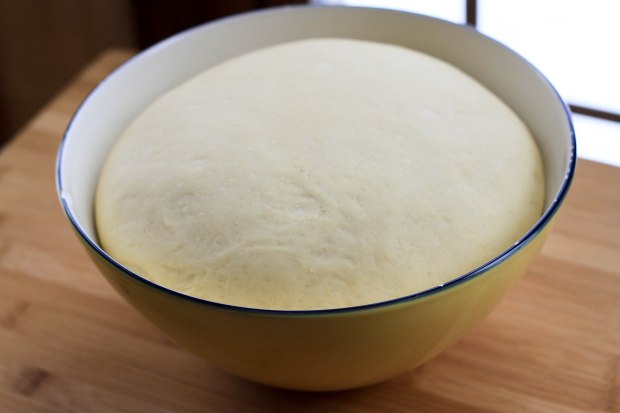 After the first rise, the dough gets punched down and then set aside to rise again. You can guess who was more than willing to punch the dough.

After the dough rose yet again (another little victory), we rolled it out to a 1/2-inch thickness.

Next we cut the rounds using a 3-inch biscuit cutter.

Miss A loved smashing the leftover scraps and rolling it out again. I believe we ended up with 27 paczki rounds.

We then set the rounds aside for the final dough rise of about 30 minutes; and guess what? They rose again! 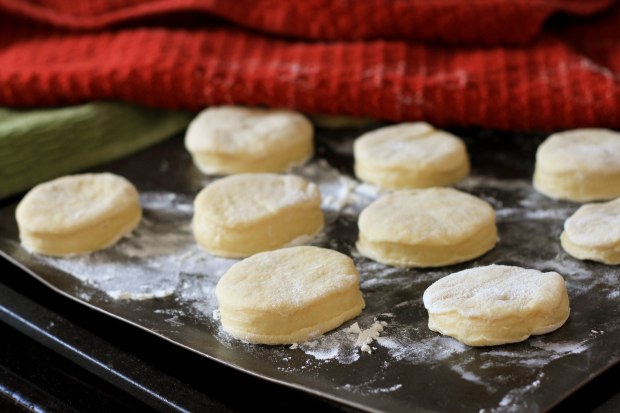 Now for the fun part, or as I told Mr. N, “Time to make the dough nuts!” Mike was right, I had wanted to use that line all day! We heated a gallon of oil to 350F. The thermometer is important to maintain the temperature (especially if you’re like me and afraid of heating oil!). 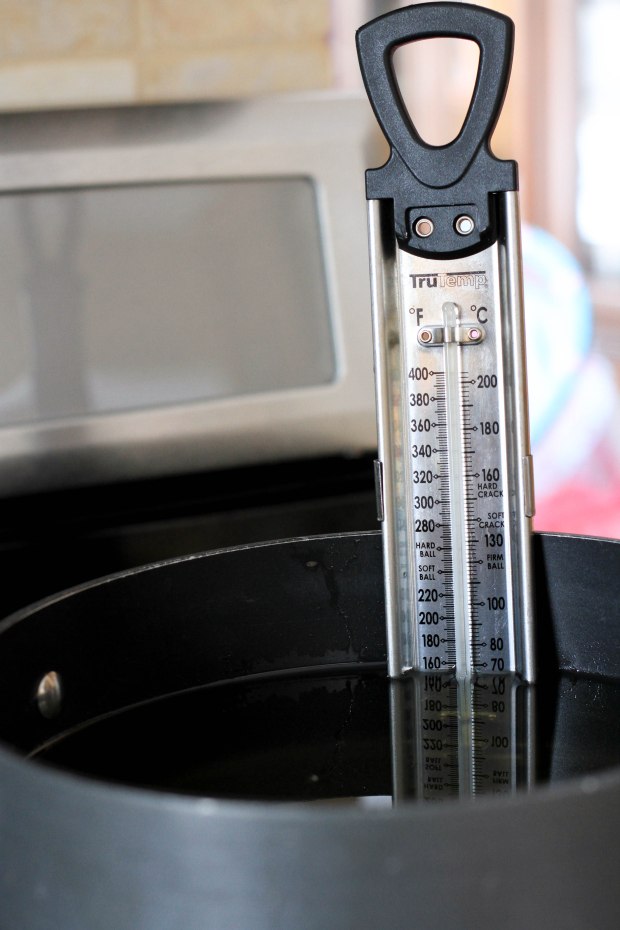 The paczki rounds are placed top-side down in the hot oil and fried for two to three minutes, or until golden brown. We fried just a few at a time to make flipping easier. 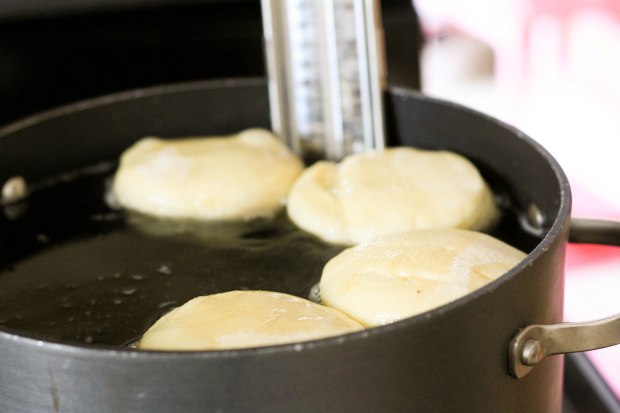 Then we flipped them over to fry the other side. So far so good!

After another minute or so on the remaining side, we carefully removed the paczki and placed them on paper towels to drain. While they drained, Mike filled half the batch with a lemon custard filling by cutting a small hole in the side of the dough nut and squeezing the filling through a ziplock bag. Although we chose a lemon custard filling, paczkis can be made with a variety of jellies, jams and custards. The most traditional of fillings is the plum jam or rose hip jam. 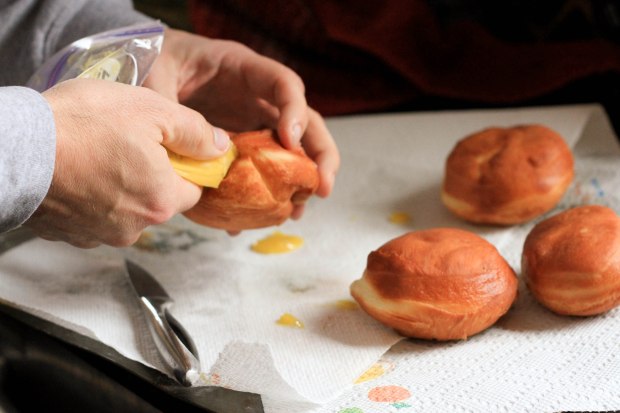 Finally we rolled the dough nuts in granulated sugar (both the filled and unfilled paczkis) before serving. 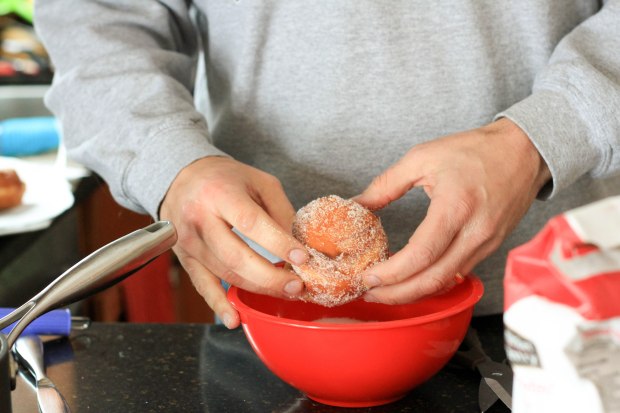 The paczkis are best served the day they are made, which definitely was not going to be a problem for us.

We stood in amazement looking at the paczkis. They actually turned out exactly as planned! Not only did they look great, they tasted just like a dough nut! We decided that these little Polish dough nuts now hold a special place in our recipe hall of fame (reserved for seemingly hard recipes that not only turn out well, but are enjoyed all around). We currently have two such dishes in this esteemed category – the paczkis and our baklawa. Both are sure to be made again and again.

Needless to say, the paczki were a hit. We each had to sample both a lemon custard filled paczki and a plain paczki. They were equally delicious – light and airy on the inside and deliciously sugary on the outside. As we were licking our fingers we decided we had to share the rest of the dough nuts or we would find ourselves in some deep trouble. So we set a few aside for the next morning and packaged the rest up for the kids to deliver to the neighbors. 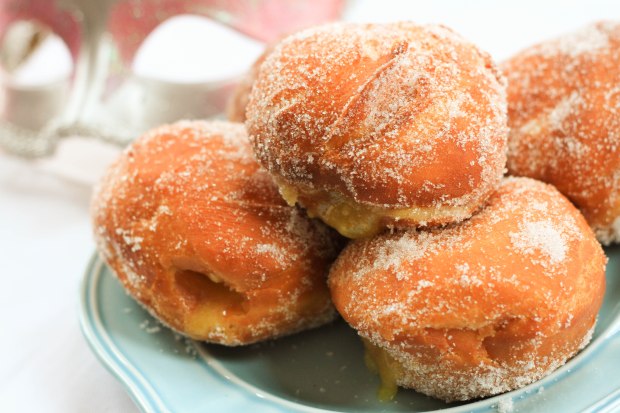 The best compliment and testament to our adventure came from one of our neighbors. As he and Mike were outside shoveling today, he told Mike, “Hey, those weren’t dough nuts you brought over. Those were paczkis!”

All the neighbors greatly enjoyed the paczki, as did we again this morning. I’m very thankful they are all gone now though. These little devils would seriously derail our healthy eating.

Now that we’ve had our very first paczki, we highly suggest enjoying one this Tuesday. Many bakeries and churches in our area will be selling them this week, but you can make them at home too! Have a great Fat Tuesday everyone. We’ll be back next week with another Polish recipe selected by Miss A.

35 thoughts on “A Dessert Worth Sharing”