I mentioned in our last post that Mr. N is studying landforms in school. This weekend he had to put together a model of his chosen landform. Knowing that most of the kids would likely choose a volcano, Mr. N did the next best thing, an island – with a volcano.

And with islands on his mind, he also knew that he wanted to pick a “piece of land with water on all sides” for his next international cooking selection. Now when Mike and I think islands we think of the Bahamas, Hawaii, French Polynesia… Mr. N however surprised us with a country that’s not just one island, but one that’s home to 94 million people and comprised of 7,107 islands – the Philippines.

A quick search of Filipino cuisine and it was clear that Chicken Adobo is a popular recipe and was going to be our first selection. Raymund at Ang Sarap has a great explanation/history of Adobo here as well as a number of other delicious Filipino recipes. You can bet we’ll be reading up on several of his recipes these next few weeks.

For our version of Chicken Adobo, we adapted a recipe we came across at the Los Angeles Times. We started by peeling off 12 whole cloves of garlic. 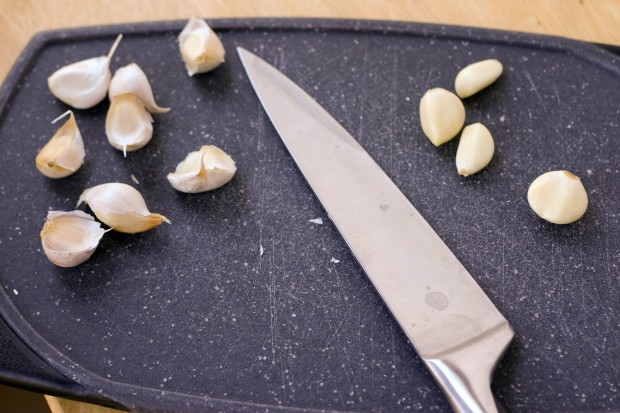 We then gathered the remaining ingredients including apple cider vinegar and soy sauce,

This recipe really couldn’t be easier. All of the above ingredients are tossed into a stock pot or large skillet along with chicken. We chose skinned and boneless chicken thighs for our version. Mr. N took care of adding the ingredients for us, including tossing in the garlic (literally).

He also poured the cider and soy sauce over the chicken before we covered it. 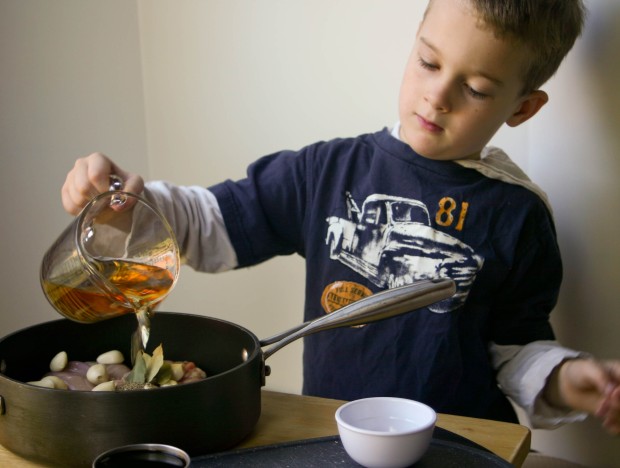 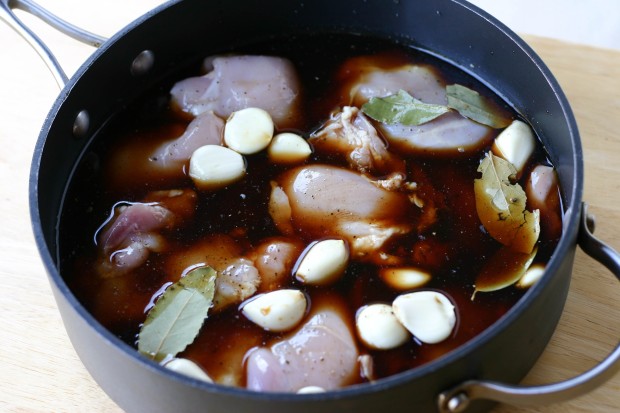 We let the mix sit in the fridge for a few hours and then brought it to a boil over medium-low heat.

Mike strained the sauce for us. 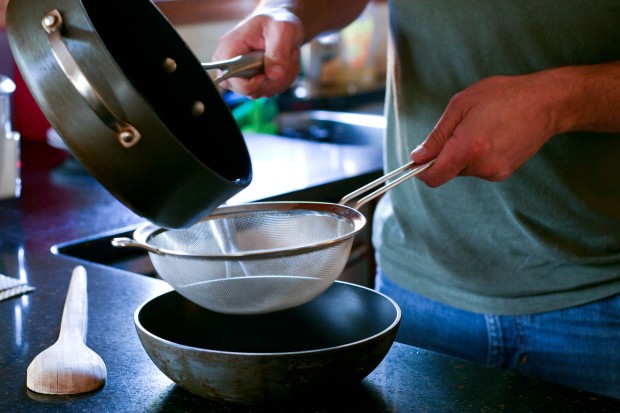 And we then tossed the chicken and sauce back into a pan to heat and coat.

I was unsure how this dinner was going to go. Mr. N was hovering the kitchen and kept asking if it was time to eat yet because it smelled really good. Miss A, on the other hand, came to the kitchen and asked what smelled stinky. Fortunately the meal went off pretty darn well. We served our chicken adobo over a barley, instead of rice, and tossed in some sautéed mushrooms, onions and toasted cashews.

This was a very intensely flavored dish, much more toward the savory side than the other Asian dishes we’ve done. The soy sauce was the predominant flavor, which left Mr. N a little confused. He initially really liked the chicken, but the more it built on him, the more he slowed down. He ended up not finishing his chicken. He said he liked it but just couldn’t eat too much soy and ultimately came in at 2-1/2 to 3 spoons. 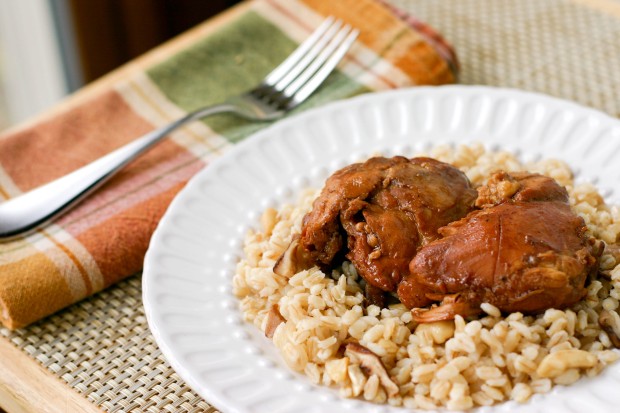 Miss A, despite her initial reaction to the aroma, ended up eating quite a bit of the Chicken Adobo and said she gave it 81 spoons (which happened to be the number on Mr. N’s shirt). Based on how much she ate, we’ll guess she gave it 3 spoons which is what Mike and I rang in with too. Mike said it was a “solid” meal and I enjoyed it too. While the soy flavored chicken was a bit too intense for me on its own, the barley helped to tone it down a bit and was a nice complement to the meal. Overall, we’re happy with our first venture into Filipino food, and hopefully it will help Mr. N to remember his island facts for his presentation tomorrow!

51 thoughts on “Livin’ on Island Time”