Now that all the birthday festivities are over, we’re back to our international cooking adventures. For the next two weeks we’re going to be cooking recipes from Wales. It was my pick this time. Wales has a place close to my heart. Not because I’ve been there. I know very little about the country on the south-west side of the island of Great Britain.

My love for Wales goes back to when Mike and I were dating. On one of our early dates, we went to the Museum of Science and Industry to see the display of Christmas trees decorated from various countries around the world. While walking around, we came to the tree from Wales and leaning against the tree was a sign written in Welsh. Mike promptly began reading me the sign to which I was completely taken aback. This guy knew Welsh! I mean, who knows Welsh?!

We went on with our date and saw several more of the museum’s exhibits. It wasn’t until a few hours later that Mike owned up to the fact that he didn’t know Welsh. We both got a good laugh out of that one and enjoyed the rest of our date. Then I went home mortified – he must think I’m terribly gullible – but I hatched a plan. I went back to school (we lived several hours apart at the time) and composed a letter to him written entirely in Welsh. I painstakingly translated each and every word using an online Welsh-English dictionary. I’m sure the grammar was awful, but that didn’t matter. I sent the letter in the mail (yep – used good ol’ snail mail) and waited.

Mike received the letter, immediately knew what it was and ran right out to buy a Welsh-English dictionary. He spent hours deciphering the letter and called me instantly. The rest as they say is history…

Now for the food…a few months back I came across a cookbook entitled, Favorite Welsh Recipes by A. de Breanski Jnr. I knew instantly which recipe would be first – the Welsh Salt Duck. Since the beginning of our adventures, Miss A has had a hankering for duck. We’re not sure why, as she’s never had it before, but being as how Mike and I are both fans of duck, and have roasted them before, we were game.

We bought a frozen duck about four days before we planned to cook it. We set it in the refrigerator for the first day to begin thawing. The next day we began the salting process. We removed the plastic from the duck and placed it inside a tin-foil baking dish. We then rubbed an ounce of Kosher salt over the entire surface of the duck and returned it to the fridge. We repeated the same process later that evening and again the next day.

On the fourth day, we were ready to cook the duck. We removed the giblets and neck from the inside of the duck and then rinsed the duck in cold water making sure to remove any of the excess salt. We then placed the duck inside of a casserole dish which we filled with water. 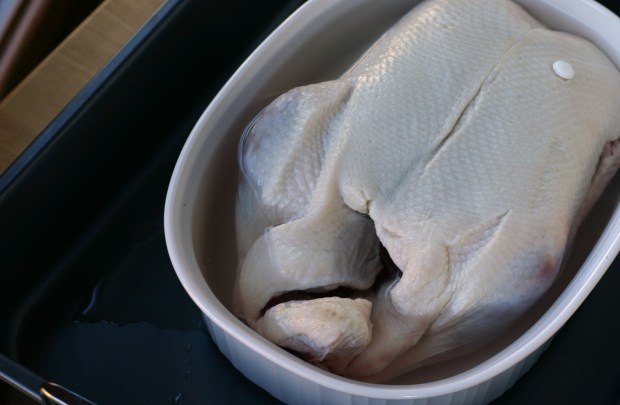 Next we brought a medium-sized sauce pan full of water to a boil. We then poured the boiling water into a roasting pan and placed the casserole with the duck inside of the pan.

We baked the duck in this fashion for about 2 hours and 15 minutes at 350F. At this point we removed the roasting pan from the oven – very carefully as there was a good amount of boiling water and grease – and took the casserole dish out of the roasting pan.

Using a strong set of tongs we moved the duck from the casserole dish to a rack set inside of the roasting pan. 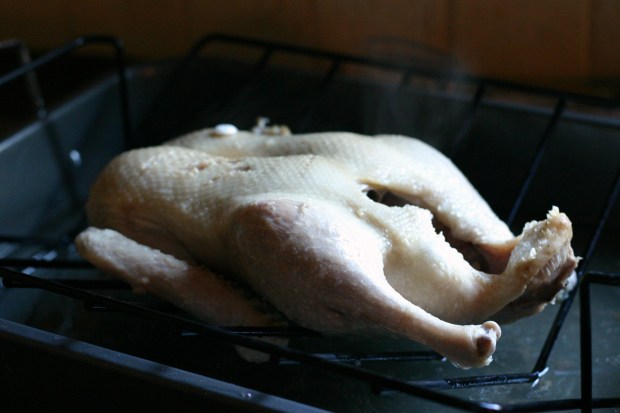 We then increased the oven temperature to 450F, returned the duck to the oven and baked it for another 25 minutes. 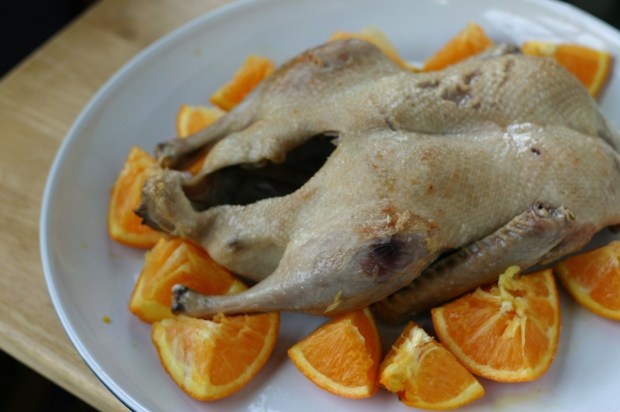 We ended up with a crispy and golden salt duck. We served our Welsh treat with a Cabernet Beurre Blanc and a side of barley and mushroom risotto.

This duck was unlike any we’ve ever had. The skin was crispy, the meat was juicy and tender and it had a strong salty flavor. Right away I knew this would be a hit with Mike and Mr. N and I was right. They both devoured their duck, and both commented on how awesome the skin tasted. It was a solid 3 spoon vote from each of them.

Miss A took some coaxing to take a bite of the duck. She was too busy trying to do gymnastic tricks on her chair. But she did eat every last bite of her duck once she started – well, all except for one piece which she fed to the cats who were hovering nearby. So another 3 spoon vote here.

I was the lone dissenter this time. It was just too much of a salt flavor for my liking. That said, I do enjoy duck, so I still ate it all up. I just won’t be eating the leftovers. Now the barley and mushroom risotto on the other hand, those leftovers are all mine!

42 thoughts on “Pass the Salt”