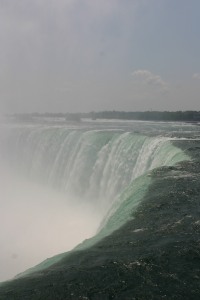 It’s back! Our quest for the best banana bread. This is our sixth installment and we still have a few more recipes to go.  Tonight’s Canadian version was sent to us by A_Boleyn and adapted from Edna Staebler’s Food That Really Schmecks. Edna Staebler is a Canadian author, known for a series of cookbooks which are based on Mennonite home cooking from the Waterloo region of Ontario. It only seemed fitting to include this recipe while we’re on our Ontario cooking adventure.

The recipe began in a familiar way. We creamed the shortening, eggs and sugar in a bowl.

My little sous chef was on hand as usual for the banana bread. She’ll be able to make this stuff in her sleep soon! 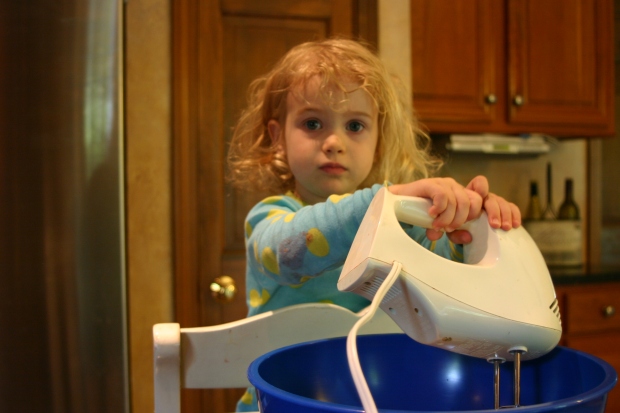 After we creamed the ingredients in the large bowl, we added three bananas, buttermilk and almond flavoring to another bowl. Miss A helped to mash-up the bananas for us. 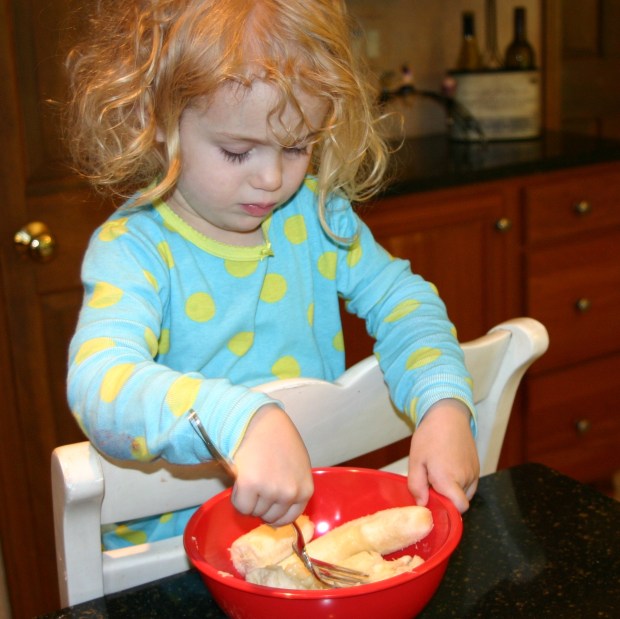 Then, in a third bowl, we sifted together the flour, baking soda, baking powder and salt. We formed the final batter by alternatively adding some of the banana mixture and some of the flour mixture to the large bowl with the eggs and blending it together. Once everything was incorporated, we added it to our loaf pan. 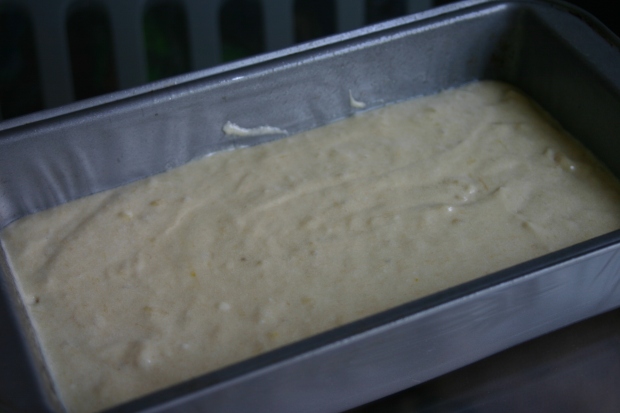 The bread baked for 45 minutes at 350F and resulted in a lighter color banana bread than some of the others.

It was also much less sweet. The almond flavoring gives this bread an entirely different flavor than our similar recipe with the vanilla extract. We served this bread both warm out of the oven and cooled with some butter. We were all really surprised at how different the flavors were in this bread, since up until now the differences have been more subtle.

The bread came in with mixed reviews. Mike and I both gave this one 2 spoons. It was good, but not our favorite. We’re partial to the sweeter variety. The kids gave it 3 spoons. They both noticed that it was not as sweet, but they still enjoyed it. Of course we saved a few slices in the freezer, so we’ll see how it stacks up to the others when we do our final side-by-side taste test. Thanks for sending this in A_Boleyn! And as always, if you have a recipe you’d like us to include…send it our way. Or if you’d like this one, here it is: Buttermilk Banana Bread

36 thoughts on “Quest for the Best Banana Bread – Ontario Style”