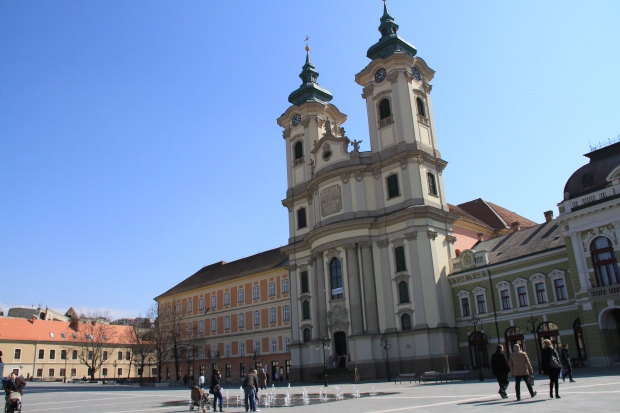 In Hungarian, the word for cheers is Egészségedre, a word I’m glad I heard before I saw.  Hungarians have lots of vowel sounds and accent marks, and after several months of practicing Polish, trying to convert written text into sounds from Hungarian is really hard.  It’s pronounced, roughly, eggy she-gehd-reh, and it sounds more like two words than one. 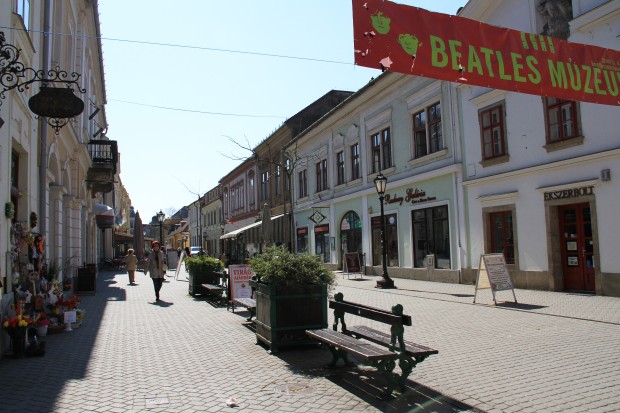 We learned to pronounce this at dinner on our first night on the town of Eger, Hungary.  We visited a little restaurant downtown, where we had little trouble communicating with our Hungarian host, despite the language barrier.  Pointing at a menu is easy in any language, I suppose.  When we were finished and getting up to leave, he brought us an apertif called Unicum. 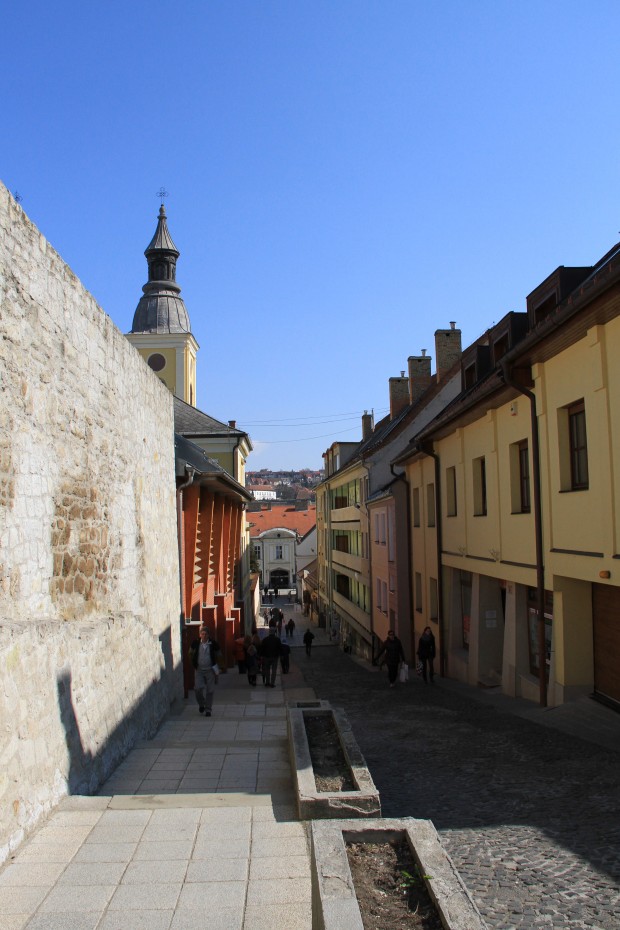 Unicum translates to fire-water. Or if it doesn’t, it should.  Before tossing it back, our host taught us how to say eggy she-gehd-reh, and we did our best to keep up.  With the language and the liquor.

Fortunately, Eger would provide us with many opportunities to practice (again, with the language and the liquor), but before you go off toasting your health and showing off your new linguistic skills, you should know that Hungarians don’t clink their beer glasses.

Eger was the highest-ranked small city on our power rankings, and Miss A gave it her top overall spot.  There’s lots to see in town, with beautiful squares, walkable streets and sophisticated wine bars and restaurants. 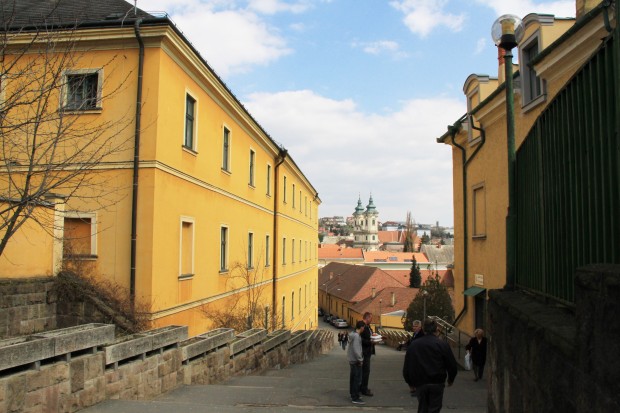 But the real highlight of Eger is out of town.

No, not the thermal bath resort (which was, in fact, awesome). 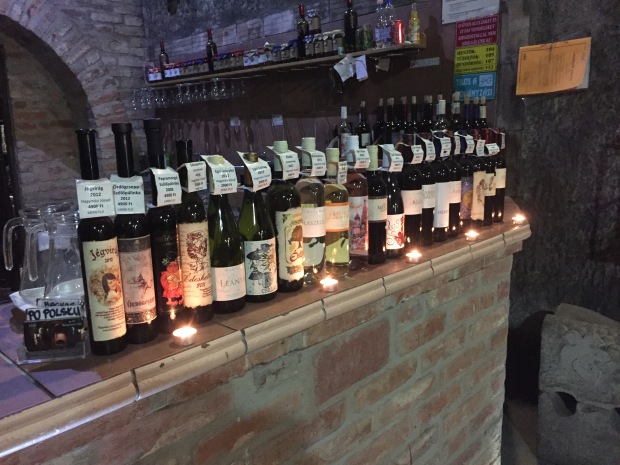 The real reason to stop in Eger is the Szépasszonyvölgy which really does translate to the Valley of Beautiful Women.  I don’t know about women, but it’s certainly a valley of wonderful wine. 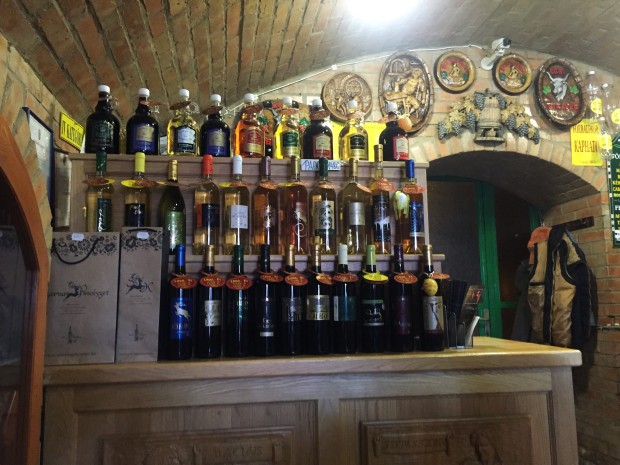 We were nervous as we approached the valley.  It’s just on the outskirts of Eger, right next to a quiet residential neighborhood (quiet, except for the dogs who barked at us from nearly every single yard as we walked there).  From the top of the road that takes you down into the valley, it’s hard to tell exactly what you’re about to come up on.  We were there during a slow time of the year, and many places along the way were still closed for the season. 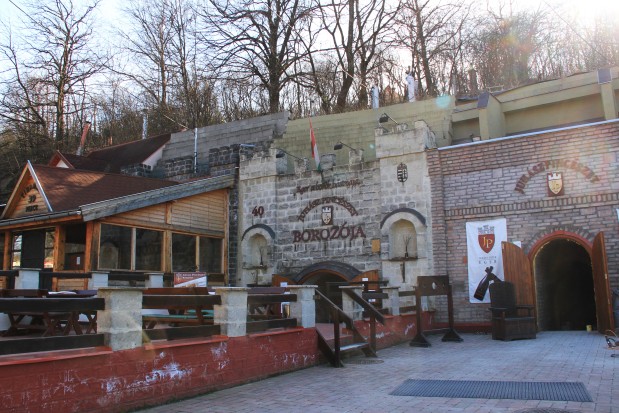 The valley consists of about 40 wine cellars contained in an area of about two small city blocks.  It’s practically made for  us.  We visited four of the wineries, chosen mostly at random, beginning with Juhasz Pinceszet.  The wines were excellent, probably the best ones that we tasted on our visit.

Each of the cellars is cut into the side of the valley, and they are set up for you to taste wines from the bottle or quite often from the barrel.  The picture above was taken from inside the cave, but up above in a room that would have been suitable for a meeting of medieval knights.  Most of the cellars evoked that sort of feeling, I suppose, and it is fitting that Eger is best known for the Egri Bikaver (“Bull’s Blood“) wine blend.  Legend has it that invading soldiers during the Siege of 1552 believed the wine was, in fact, bull’s blood, though the story gets decidedly murky after that.

Bikaver is a red blend, which must include three grapes and usually includes Kékfrankos as one of them.  There was a notable difference between the best and the worst, but one thing is for sure–the taste of the wines lingered on the palate for what seemed like the rest of the day.

There are a few restaurants in the valley as well, a couple of which were nice and several of which were cheap.  We picked a cheap one (not shown), and we got what we paid for.  Then we headed for our final stop, Biro et Fia.  There we met Beatrix, and sadly we don’t have a photo, but we won’t need one to remember.

Beatrix, who was probably 75 years young, spoke very little English, but she could tell a tale with her hands like no one I’ve ever met.  We spent probably about an hour laughing and tasting wine, sometimes out of these long fancy glass tubes that somehow Beatrix could aim and fire at our glasses with pinpoint accuracy.  She could hit her own glass too–she was matching us taste for taste, an impressive feat because I’m sure we weren’t the first people to come through that day.  The kids loved it as well–Beatrix hooked them up with corks and toothpicks for making sculptures and merriment.

Alas, all good things must come to an end, but the end of our visit meant we were headed to Budapest.  As we hit the road, Eger had certainly left a pleasant taste in our mouths.