This is it! The last stop on our journey to Poland. While we had hoped to spend more time in Germany, it was not meant to be on this adventure. We did, however, enjoy a brief overnight in the beautiful city of Dresden.

Prior to our visit we knew little about the former seat of the kingdom of Saxony, other than it played a significant (and controversial) role in World War II. Dresden was the site of an extensive aerial bombing attack on Germany by both British and U.S. forces, after which the Germans surrendered three months later. The attack decimated the majority of the city center and killed approximately 25,000 people.

The controversy? Dresden, a magnificient display of baroque architecture, was a cultural center for the region. It enjoyed a golden age under the rule of August the Strong (who also became King of Poland in 1697) and his son Friedrich August II from 1694-1763, at which time many of the city’s famous structures were built including the Zwinger Palace, Hofkirche, Frauenkirche (pictured below) and the Taschenberg-palais. The bombing was a strategic effort by the British and U.S. governments to attack a critical industrial and military target; however, critics of the bombings contend that Dresden was a cultural landmark and of no significance to the war effort. Regardless, the city was utterly destroyed – and this all took place exactly 71 years from the date of our visit on February 13-15, 1945.

War is an ugly business, and World War II is no exception (the horrors or which we’ve studied in depth during our “history” lessons). But such studies also present an opportunity to teach the kids about positive outcomes and enduring spirits. Dresden is such a case.

After the war some of the structures including the Zwinger Palace and the Semperoper (opera house) were rebuilt to their original grandeur, where possible reusing materials; while other areas including Neumarkt and the Frauenkirche were left in rubble as a memorial to the horrors of war. Since German reunification, many more areas (including those left previously untouched) have undergone signficant restoration and the city is once again vibrant, full of culture and architecturally stunning.

Our hotel was located in the Neumarkt area and presided over by the impressive Frauenkirche, which was completed through the assistance of British fundraising support, in 2005. While much of the area has been restored, gaps remain standing testament to the events 71 years earlier. As the kids chased bubbles on the square, bells echoed calling passerbys to the evening’s services. It was a lively evening with tourists and locals strolling the streets. While our time was limited, we enjoyed our tour of the Old Town and pledged to return in the spring (which we still hope to do, but time is flying!).

Our first taste of Germany as a family was delightful, and especially impactful to Mr. N who has since taken up studying German! The streets were friendly, safe, clean and full of shops, restaurants and cafes; and the river front was beautifully lit as the sun went down. It was the perfect place to let the kids run free, stroll about and take in the previous six weeks of adventure before embarking on our time in Poland. If you’re planning a trip to Germany, Dresden should not be missed! 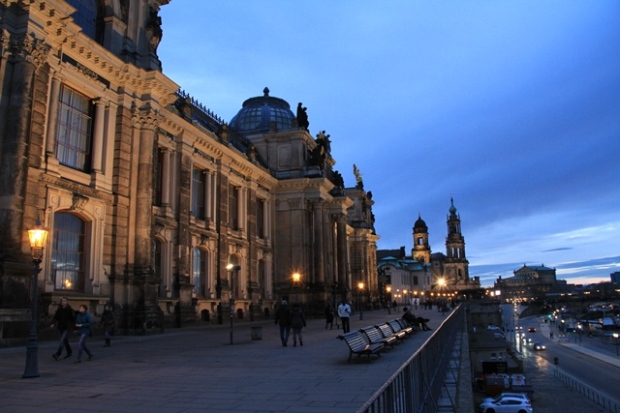 As for our literal taste of Germany, well, it too will have to wait. We let the kids choose dinner that evening and they were insistent on sushi. We didn’t really argue after having dined on heavy French food for the past few weeks! We did, however, delve into German cuisine before we left the states with these Juniper and Thyme Lamb Chops created for Wine Tourist Magazine’s April issue.

This issue features both Old and New World wines; therefore, also the combination of Old and New World cuisine by combining German and New Zealand flavor profiles in this delicious springtime dish. You can read more about the dish and recipe here. It was a winner for us pulling down 3 spoons from Mike, Mr. N and I and no less than 95 spoons from Miss A, our little carnivore. I also appreciate the simplicity of the recipe, which we prepared when time was of the essence. Just thinking of it makes my head spin (and feels like ages ago)!

Perhaps we’ll make it back over our western border before our time here is done, but until then we’ll be delving into our Polish adventures with some side trips to several other Eastern European cities. We hope you’ll come along for the ride! (It’s certainly been a busy one!) Cheers!

7 thoughts on “German Influence (And a new recipe!)”