Many modern wine drinkers will look at this section and wonder why on earth I think it worthwhile devoting so much space to such a dinosaur of a wine as sherry. The answer is plain to anyone who has tried a good quality version. The trouble is that most people have not.  —Jancis Robinson 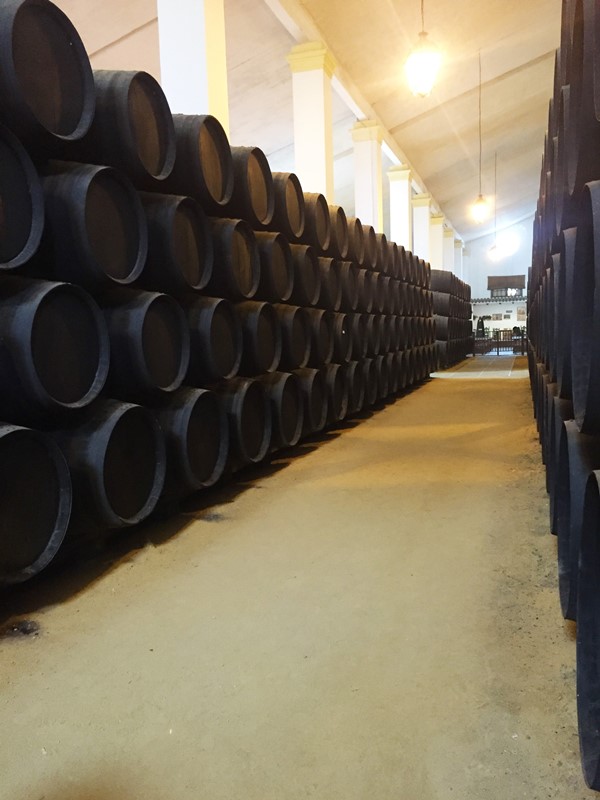 I hesitate to give too much space to wine critics.  People should drink what they like, and it’s more fun to explore and figure out what that is for yourself, rather than being told by someone else.  Before our visit to Spain, however, my experiences with Sherry basically led me to conclude that it’s terrible.  Now?  I have gone from one of Jancis Robinson’s “most people” to a much more enlightened explorer.  Sherry will become a fixture in our cellar. 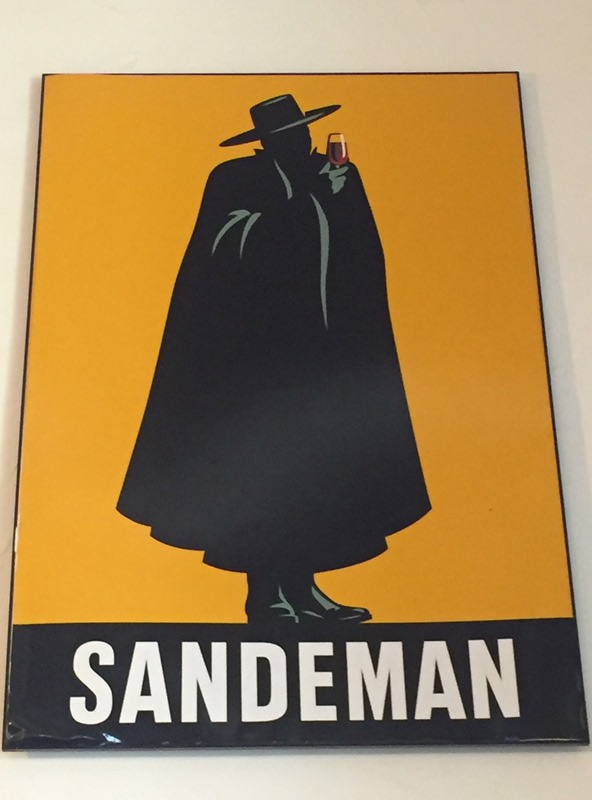 Our second Spanish apartment was in Arcos de la Frontera, just a short drive from the town of Jerez, one corner of the so-called Sherry triangle and the place where Sherry gets its name.  Our first visit was to the Sandeman Bodega, one of the oldest Sherry bodegas in existence and a place with some sweet logos.

This means that the stuff in the bottom barrels never gets completely emptied, and the longer they keep making the wine, the older, on average, the stuff we’re drinking becomes.

The whole process is fascinating, actually.  The floor is basically exposed gravel under the barrels, and they use a watering system in the summer to keep the inside of the building at the right temperature and humidity.  The barrels, believe it or not, are American oak, and kept for as long as possible rather than rotated out after just a few years like you might with fine red wine.  This keeps things as neutral as possible, and to some extent, the goal is to have consistency from year to year, rather than have distinct vintages.

After the tour, we got to taste three Sherrys, a Fino (dry), an Amontillado (medium-dry) and a Crema (sweet).  All were excellent, fun, and a far cry from my perception of the Sherry we get at home.  The prices are very reasonable too, for as much personality as these wines have.  We picked up a bottle of the Armada, which is a crema.  It’s thick and sweet, something you’d have with desert, and very interesting.  It’s a long distance away from the Fino, which would easily match with food.

Also in Jerez, we visited the Real Escuela Andaluza del Arte Ecuestra for a horse show.  It was a spectacular facility and a spectacular production!  Sadly, we weren’t allowed to take pictures in the stadium, but we did get a few pictures on the grounds.  Kristy was seriously moved by the horse show. 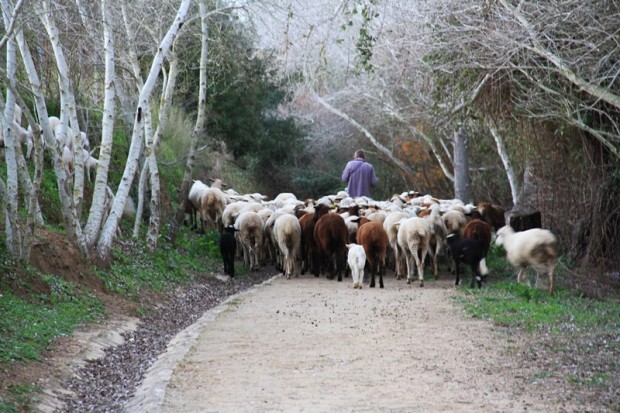 We were able to get some pictures of this herd of sheep later on, though not until they’d just been herded through us.  It’s a little nerve-racking to be in the middle of a herd of anything, even these cute, docile sheep who were way more scared than we were, but it didn’t seem right to whip out the camera in the midst of the morass. 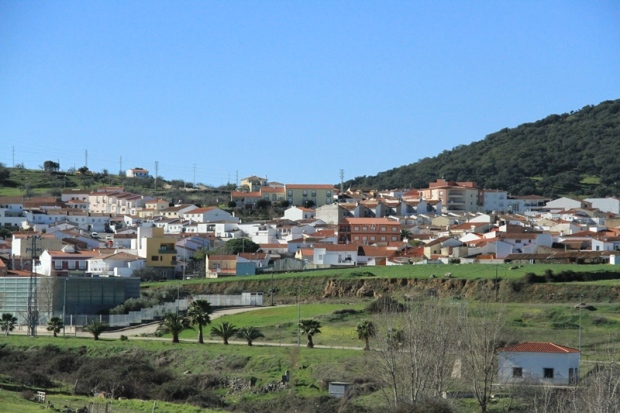 Andalucía and the Sherry-producing region is a beautiful slice in the world, and after our visit to Jerez, we headed out to the second vertex (the kids are keeping travel dictionaries where we write down words they don’t know and find out their meanings–see if you can catch me slipping in some test-words) of the triangle, el Puerto de Santa Maria. 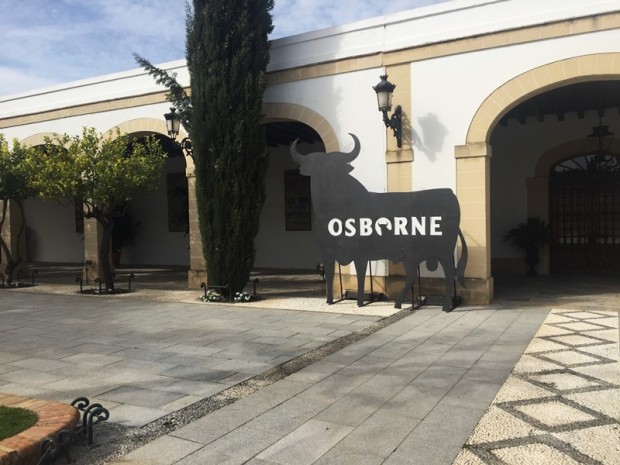 El Puerto is tucked between Cadiz and a mostly protected bay that opens into the Atlantic Ocean.  It’s also home to the Osborne Bodega, another purveyor of fine Sherries and one of my favorite tasting experiences yet.

Through much of Spain, we’ve found that wineries and bodegas aren’t set up for you to just drop in and taste wine like you can in the United States.  Rather, they’re set up so you can taste at the end of a winery tour.  Unfortunately for me, wine does not get old, but winery tours do.  Osborne sets you up with a private, self-guided tour that is exactly how I want to taste wine.  It’s expensive, but they make it up in wine (look at the size of the pours!)

We were set up in a seriously Class A conference room, with simple tapas and five different Sherries to taste.  We were also given a 16-page booklet with some history on the wines and winery, along with tasting notes and room for our own observations.  Then, they left us alone to enjoy things in our own way and on our own time.

You can see how they progress from dry to sweet in the color of the glasses in front of Kristy.  The two palest ones are Fino, made with Palomino grapes and very dry.  The next two are Oloroso, which are darker and sweeter.  The middle one is also Palomino grapes, while the fourth one contains a small amount of Pedro Ximenez grapes as well.  The darkest one is also the sweetest, made with Pedro Ximenez grapes entirely.

Sherry is fortified, which means that alcohol is added to the wine in a second stage of production.  I always thought this was basically like dumping a bunch of grain alcohol in the vat, but it’s much more interesting.  Essentially, the grapes are pressed like normal, then the leftover skins and guts are processed again to create the alcohol that gets added later on.  The different methods of doing this second step are an important part of what gives the different kinds of Sherry their unique characteristics.

We didn’t make it to Sanlucar, the third city in the Sherry triangle, but we did manage to wander around in el Puerto de Santa Maria and check out the restaurant scene.  There’s no shortage of places to pick from, but of course that’s true for all of Spain, isn’t it?

It wasn’t quite bikini weather, but we had a chance to build a sandcastle, with the help of a little dog from Portugal making his way through Europe with a family from the U.K. 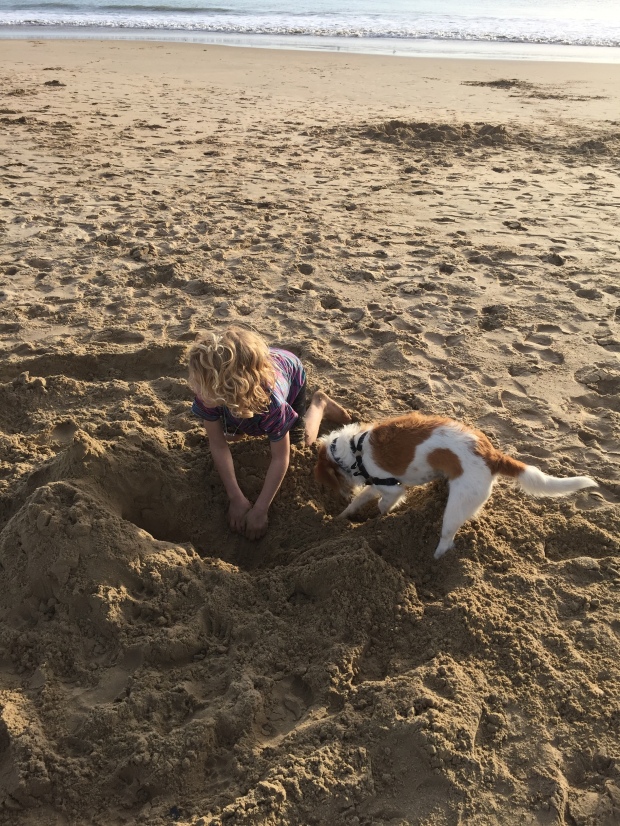 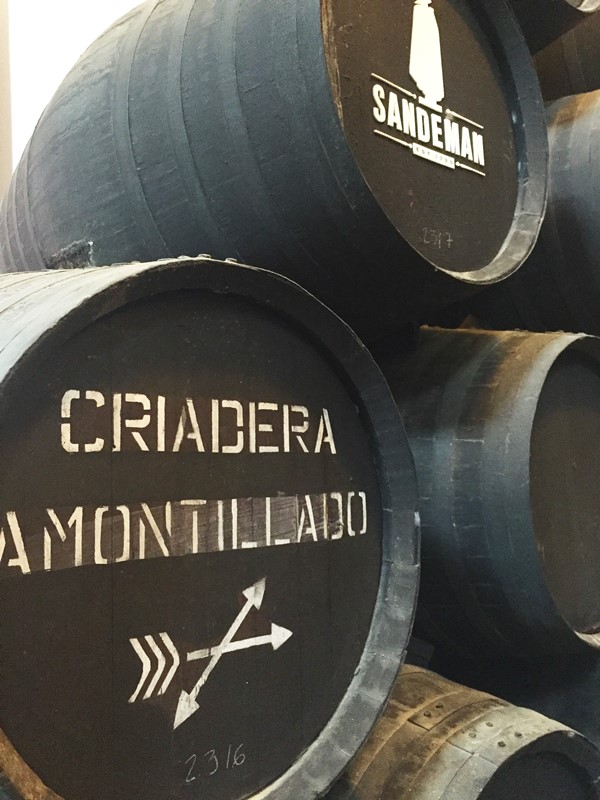 The method for making Sherry came about because fortifying the wine made it easier to ship to the U.K., where it has been historically very popular.  Sherry gets its name from the inability of the Brits to pronounce Jerez, the modern form of Xérès, which is the name of the Andalucían region where it’s made.  They still often print all three names on the bottle, connecting those of us who enjoy it with the wonderful producers and places that exist today and the traditions and families of the past.  I’m glad we found this little triangle of the wine world. It’s complex, rustic, refined, traditional, exciting, relaxing and again, above all else, proud and passionate.

As for what’s coming home with us, a bottle of Fino, Oloroso and Crema as well as a bit of Andulicía in our souls.

Visit Sandeman Bodega: Sandeman offers three kinds of tours, from basic to premium.  We did the basic tour for 14 Euros and three Sherries and that was perfect for us.  Tours are at various times in various languages, depending on the season.  I recommend calling to double-check.  Email: visitors.jerez@sandeman.com, Phone: +34-675 647 177.  Address: Calle Pizarro 10, 11403 Jerez de la Frontera, Spain