After our good and filling Welsh duck dinner last weekend, we wanted our next recipe to be a bit healthier, and a bit less labor intensive. After flipping through our cookbook, Favourite Welsh Recipes by A. de Breanski Jr., we came across this recipe for Monmouth Pudding and knew it would make for a great breakfast.

The recipe is described in the book as one that was often served in Victorian times and was ideal for children and adults with “delicate digestions.” It’s basically a bread pudding that incorporates strawberry preserves. Traditional Monmouth pudding will reveal red and white stripes when served; however we opted to pick health over beauty with this one. While using white bread crumbs would no doubt make this a striking dish, the whole wheat bread crumbs don’t have quite the same aesthetic effect. That said, despite its lackluster appearance, it’s really a more healthy alternative.

We started by bringing the milk, butter and sugar to a boil. 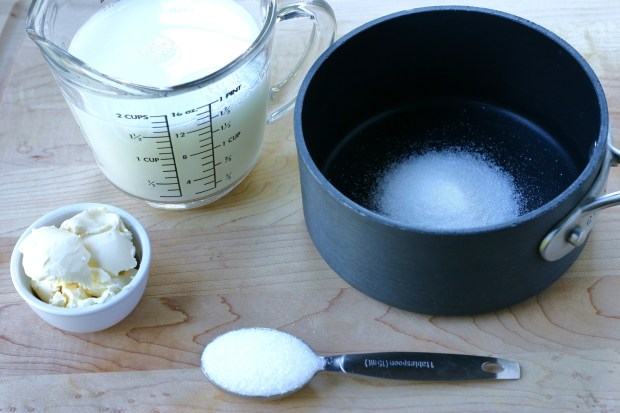 We then added the boiling liquid to the bowl with our whole wheat bread crumbs and set it aside to cool.

Once it was sufficiently cooled down we mixed in the yolk of three eggs.

We then scooped half of the batter into 12 muffin tins and turned our attention to the fruity filling. We used both strawberry preserves and a raspberry fruit curd which I found in an all-things-British store in the middle of Wisconsin. Incidentally it’s the same store where I found this cookbook – Wisconsin of all places. Who knew. Anyway, we then microwaved both the preserves and the curd for a few seconds to melt it a bit and spooned out some of the preserves into six of the tins and the curd in the other six tins.

We then repeated the process using the remaining batter and topping it with the final scoop of preserves and curd.

The pudding baked for 45 minutes at 350F, at which point the batter had set and it came out bubbling hot. We scooped the pudding out and served it hot with fresh fruit and a dollop of butter. 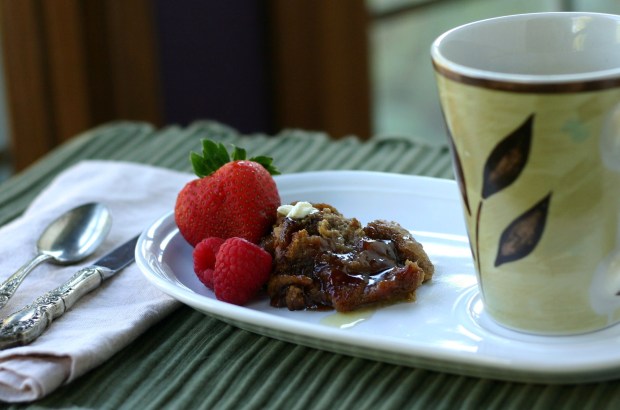 The Monmouth pudding was a hit. It tasted just like a buttery and hot piece of toast, only better. It is an absolute comfort food and makes for a delicious and filling breakfast. Mike, Mr. N and I all gave the pudding 3 spoons. Miss A was a bit unsure of her breakfast though. We even tried offering her some maple syrup to go with it, but she still wasn’t buying it. She did eat a few bites and said it was good, but then ran off to play. So we’re not sure if she liked it and just wasn’t hungry, or if she was just being polite. Either way, we’ll say she gave it 2 spoons.

I’m anxious to try this recipe again. Next time I’m going to bake it in four individual ramekins and sprinkle it with some oats. I think the presentation might be a little more appealing and the oats would add a nice bit of texture. That said, we were happy to have found another tasty breakfast recipe for those mornings we feel like more than a bowl of cereal. It was a Monmouth success. 😉 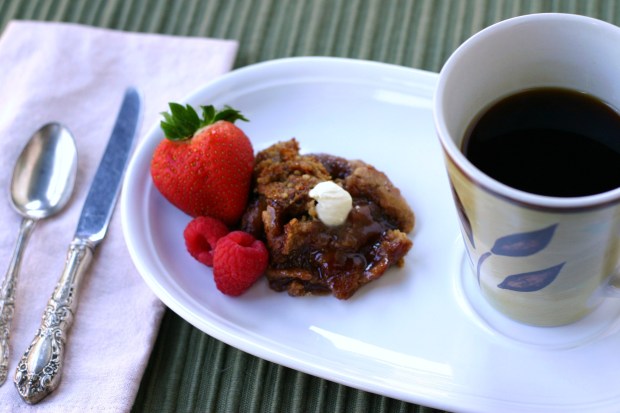 44 thoughts on “All Warm and Toasty”